The ministers from Britain, Canada, France, Germany, Italy, Japan and the United States, plus the European Union, said in a statement after their meeting in Germany that recent crises have drawn attention to "systemic vulnerabilities to chronic risks and acute supply chains shocks" that hamper economic growth and security.

"We, the G-7 Trade Ministers, underline that diversifying trade and expanding trading relations on a mutually beneficial basis is key to ensuring well-functioning supply chains and to improving the resilience and sustainability of our economies." 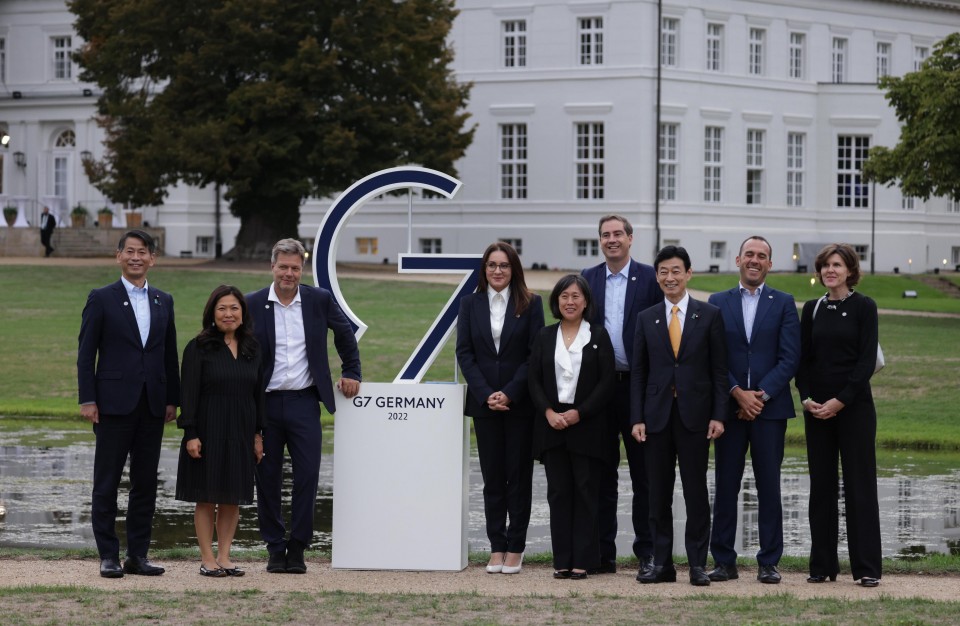 Participants at a Group of Seven trade ministerial meeting pose for a photo on Sept. 14, 2022 in Neuhardenberg, Germany. Japanese Economy, Trade and Industry Minister Yasutoshi Nishimura is seen third from the right. (Getty/Kyodo)

Factories in Europe and elsewhere began reporting production problems in the early months of 2020 following the spread of the coronavirus in China, and disruptions spread along global supply chains, compounded by the restricted movement of logistics. The situation was made worse by Russia's invasion of Ukraine in late February this year.

The statement criticizes Russia's war, including its attacks on Ukraine's production and exports, as causing particular concern about food security for developing and least-developed countries.

"We continue to condemn Russia's brutal, unprovoked, unjustifiable and illegal war of aggression against Ukraine," said the G-7 ministers, adding they will expand coordinated efforts to prevent Moscow from profiting from its aggression and stemming Russia's ability to carry out the war.

Yulia Svyrydenko, Ukraine's first deputy prime minister and minister for economic development and trade, was present at the meeting, and she asked for support to realize a safe living environment and stable employment for Ukrainians.

"We need to create a financial framework, which collects and guarantees private capital, so that private-sector money can go into Ukraine," German economy minister Robert Habeck told reporters through an interpreter after the meeting in Brandenburg near the German capital Berlin.

Japanese Economy, Trade and Industry Minister Yasutoshi Nishimura told reporters after the meeting that strengthening supply chain resiliency needs the involvement of emerging and developing economies, suggesting it will be necessary to expand cooperation beyond the existing G-7 framework.

The ministers also said supply chains should promote their climate goals and the sustainable use of resources, as G-7 nations have committed to achieving net-zero emissions by 2050.

Meanwhile, the ministers expressed concerns over some trade practices such as intellectual property theft, market-distorting actions of state-owned enterprises, and harmful industrial subsidies, among others.

The statement did not mention China by name, but concerns about the country's trade practices were evident.

"In order to fight attempts at economic coercion, reaffirming the G-7 leaders' commitment, we will enhance cooperation and explore coordinated approaches to address economic coercion both within and beyond the G-7 in relevant fora," the statement said.

During the meeting at Neuhardenberg Castle, the ministers also reaffirmed their commitment to reviving and reforming the World Trade Organization, often criticized as being mired in dysfunction, and modernizing its rulebook.

Japan will take over the G-7 chairmanship from Germany next year.