Russian President Vladimir Putin on Friday declared the annexation of four occupied Ukrainian regions amid his country's seven-month-old war, heightening tensions with the West as the move immediately prompted a fresh wave of criticism and sanctions.

Moscow's unilateral action to absorb some 15 percent of Ukraine's territory came after it said local populations voted to join Russia in recent referendums, with Kyiv and the West condemning the polls as illegitimate.

"People living in Luhansk, Donetsk, Kherson region and Zaporizhzhia region are becoming our compatriots forever," Putin said, according to Reuters. "They have made a choice to be with their people, their motherland, to live with its fate." 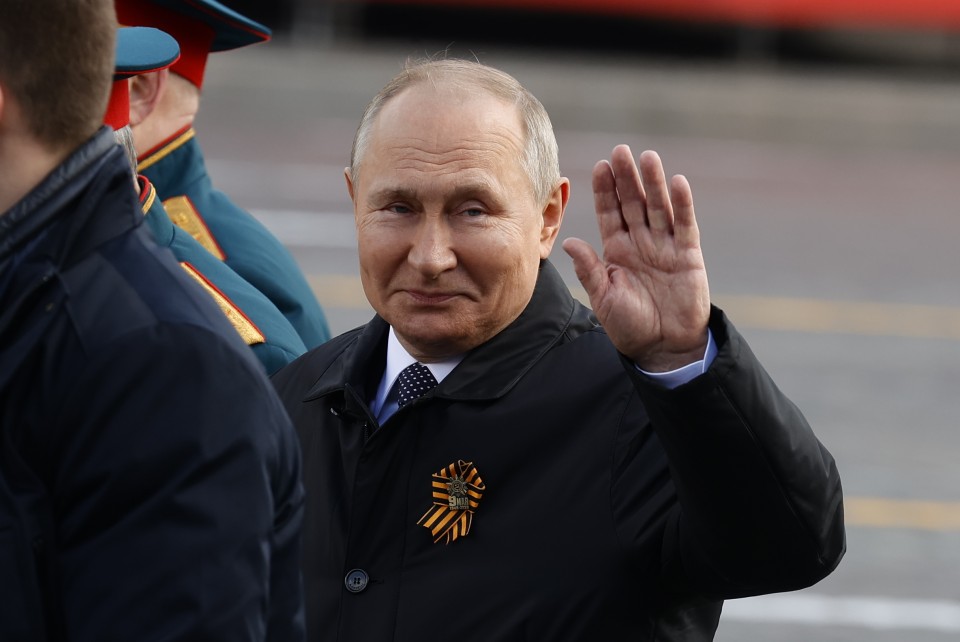 Russian President Vladimir Putin attends a military parade during the 77th anniversary of the Victory Day in Red Square in Moscow on May 9, 2022. (Anadolu Agency/Getty/Kyodo)

"Welcome home!" Putin also said at a concert in Moscow's Red Square to celebrate the annexation, prompting chants of "Russia! Russia!" from the flag-waving crowd, the news agency reported.

It is the second time since the end of the Cold War that Russia has allegedly expanded its territory, with the first taking place in 2014 upon the annexation of Crimea from Ukraine, also following a discredited referendum.

The Group of Seven industrialized nations, including the United States, Japan and Britain, criticized the latest development, saying it constitutes "a new low point in Russia's blatant flouting of international law, and yet another example of Russia's unacceptable violations of Ukraine's sovereignty."

"We will never recognize these purported annexations, nor the sham 'referenda' conducted at gunpoint," the G-7 foreign ministers said, warning of "further economic costs" to be faced by Russia and relevant individuals and entities, including those outside the country, for providing "political or economic support" for such violations of international law.

The G-7, which also includes Canada, France, Germany and Italy, plus the European Union, reaffirmed that the four occupied regions as well as Crimea are "integral parts of Ukraine."

Since Russia's invasion began in February, the G-7 members have been acting in lockstep to roll out a series of sanctions, including a freeze on assets held by Putin and the exclusion of Russian banks from a key international payment network.

U.S. President Joe Biden told reporters Friday that the annexation is a sign Putin is "struggling" in the war and said the United States and its allies will not be intimidated by Russia's threats.

"He can't seize his neighbor's territory and get away with it," Biden added.

Upon proclaiming Russia's annexation, Putin said his country "will defend our land with all our strength and all our means," while calling on Kyiv to "immediately cease hostilities and return to the negotiation table," according to Reuters.

But there are no clear indications the conflict will be resolved any time soon, as Ukraine seeks the return of all its territory.

Concerns also remain over Russia's nuclear threats, with the United States and its allies continuing to provide massive security assistance to help Kyiv defend itself against the invasion.

U.S. National Security Adviser Jake Sullivan told a press conference Friday that there is a risk Putin could resort to nuclear weapons, given all the "loose talk and the nuclear saber-rattling by Putin that he would consider this."

But he said the United States does "not presently see indications about the imminent use" of the devastating armaments.

Russian-installed officials have said that the four occupied areas saw between 87 percent and 99 percent of voters wanting to be part of Russia.

U.N. Secretary General Antonio Guterres said on Twitter that the referendums "can't be called a genuine expression of the popular will" and that any annexation of a state's territory by another state based on threat or use of force violates the U.N. Charter.

Public support for Putin has fallen since Moscow decided to draft civilians into the military amid setbacks suffered by Russian forces in Ukraine.

Large numbers of people have been fleeing the country to escape conscription.