The foreign ministers of Japan and South Korea agreed Monday that the two nations will continue discussions toward an early resolution of the issue of wartime labor compensation.

Japanese Foreign Minister Yoshimasa Hayashi told reporters that he and his South Korean counterpart Park Jin welcomed working-level talks on the issue when they met in New York on the fringes of the U.N. General Assembly's annual gathering.

As for a possible summit between Japanese Prime Minister Fumio Kishida and South Korean President Yoon Suk Yeol when they are both in New York, Hayashi said, "Nothing has yet been decided," stopping short of clarifying whether the matter was brought up during their talks. 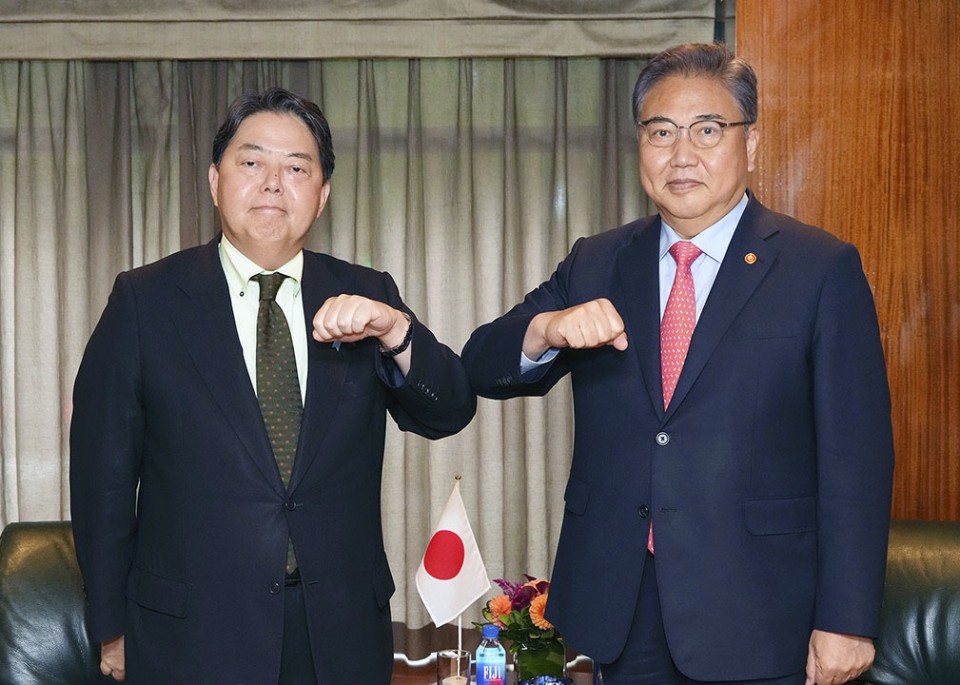 Seoul had said the two leaders were arranging a meeting on Tuesday or Wednesday in the U.S. city.

The foreign ministerial meeting came as South Korea is exploring how to deal with the issue of court orders to liquidate assets in the country seized from two Japanese companies that had been sued over alleged forced labor during Japan's 1910-1945 colonial rule of the Korean Peninsula.

The companies have not complied with the compensation orders as Tokyo maintains that all claims stemming from its colonial rule, including compensation for Koreans forced to work, were settled "completely and finally" under a bilateral agreement signed in 1965.

A public-private consultative body was set up in July, with Yoon's government seeking to prevent the liquidation of Japanese corporate assets in the hope of avoiding a further deterioration in bilateral relations.

Yoon won the presidential election in March as the conservative main opposition party candidate with a pledge to take a future-oriented approach toward relations with Tokyo. In May, he replaced Moon Jae In, who saw Tokyo-Seoul relations sink to their lowest point in years while he was in power from 2017.

Following the launch of the new South Korean government, expectations have been growing that a summit between Kishida and Yoon could lead to better bilateral relations. The summit would be the first in-person talks of the two East Asian nations' leaders since December 2019.

In June, Kishida and Yoon met in person in Madrid for the first time as leaders of their respective nations, attending a North Atlantic Treaty Organization gathering as Asia-Pacific partners. But they only spoke briefly on the sidelines of the gathering.

Since Park took up his position as foreign minister following the president's inauguration, he and Hayashi have met frequently, holding talks in Phnom Penh in early August and in Tokyo in mid-July.

On the security front, meanwhile, Hayashi and Park pledged to ramp up their bilateral and trilateral defense cooperation involving the United States to counter North Korea, which repeatedly test-launched ballistic missiles earlier in the year in defiance of U.N. Security Council resolutions.

Concerns are growing that Pyongyang may carry out its seventh nuclear test, which would be its first since September 2017, as the nation is believed to have completed the necessary preparations.