The foreign ministers of Japan and Cambodia agreed Thursday to beef up security cooperation amid Beijing's growing clout in the Indo-Pacific region, the Japanese Foreign Ministry said.

Japanese Foreign Minister Hayashi said in a meeting with his Cambodian counterpart Prak Sokhonn in Phnom Penh that Japan aims to make regular visits to the Ream Naval Base on the Gulf of Thailand, near the South China Sea, according to the Japanese Foreign Ministry. The port has been modernized with Chinese financial aid. 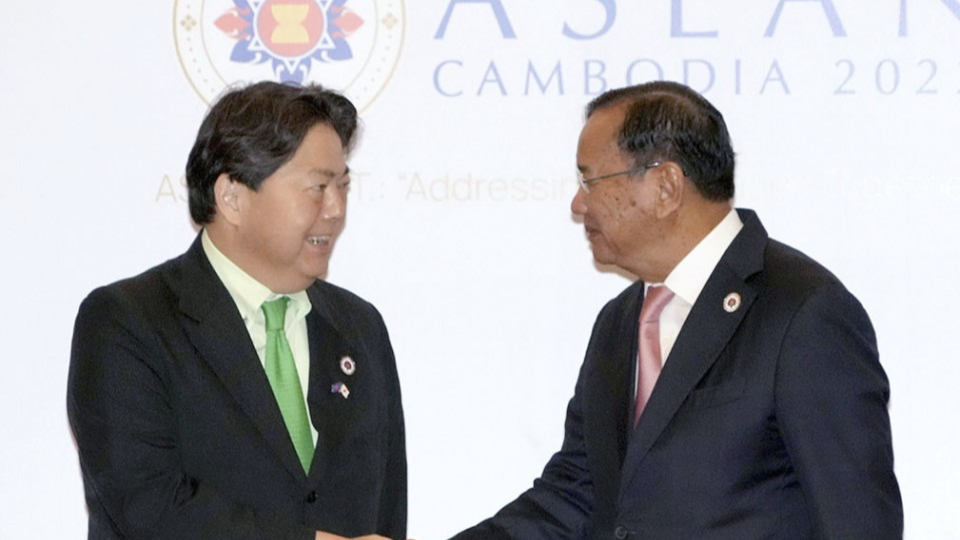 Sokhonn, who doubles as deputy prime minister, said he wants to promote bilateral defense cooperation with Japan, including visits by Japan's Maritime Self-Defense Force following a port call at Shihanoukville by MSDF vessels in March, the Japanese ministry said.

Cambodia, known to have friendly ties with China, is planning to host the Chinese navy at the Ream base in exchange for Beijing's support for the recent construction and upgrading of structures there including a drydock slipway and pier according to a U.S. media report, although the Southeast Asian nation has denied it.

Hayashi pledged Japan's continued support for enhancing the functioning of Shihanoukville, a commercial port with the deepest berths in the nation located near the naval base.

Hayashi and Sabry discussed the ongoing political and economic crises in the South Asian nation, the Japanese Foreign Ministry said.

The bilateral meetings were held on the fringes of a series of Association of Southeast Asian Nations-related foreign ministerial gatherings from Wednesday through Friday in the Cambodian capital. Sri Lanka is part of the 27-member ASEAN Regional Forum, whose ministerial talks are scheduled for Friday.