Ritsu Doan made a big impression on his debut for Bundesliga outfit Freiburg on Sunday, sealing a 2-1 comeback win over Kaiserslautern in the opening round of the German Cup with a spectacular free kick in extra time.

German Cup runners-up last season, Christian Streich's Freiburg side had their hands full away to second-division Kaiserslautern, who took a 1-0 lead through Marlon Ritter before halftime at Fritz-Walter-Stadion. 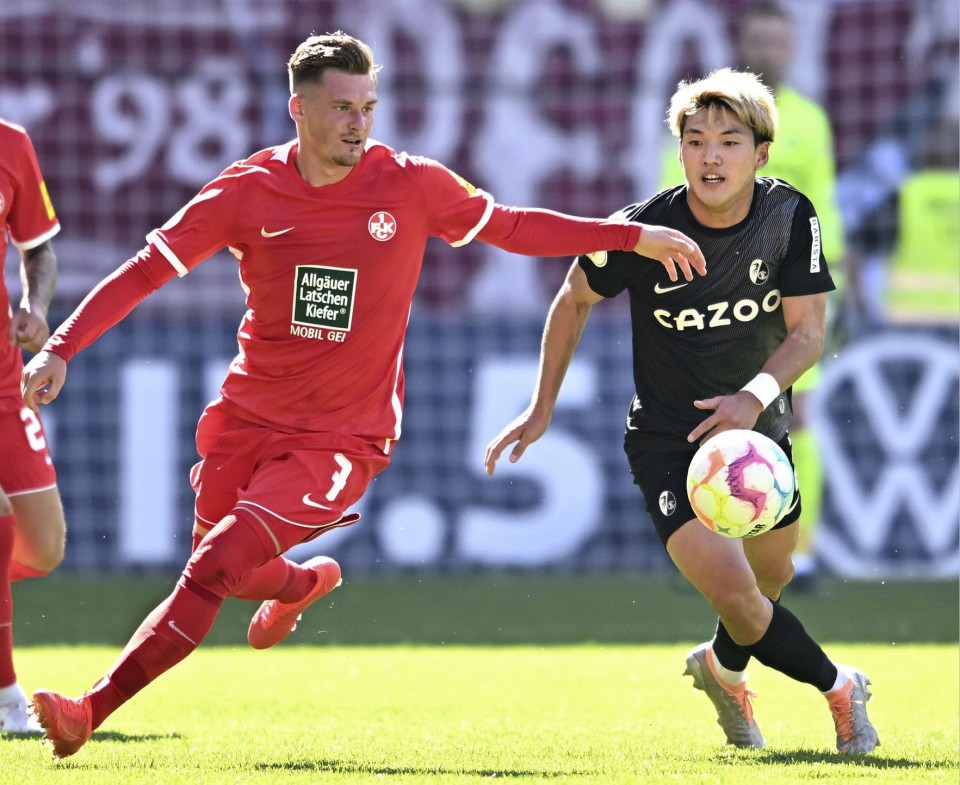 Ritsu Doan (R) of Freiburg in action during the German Cup first round match against Kaiserslautern on July 31, 2022, in Kaiserslautern, Germany. (Kyodo)

Roland Sallai's late equalizer sent the game into extra time, with Doan taking over the contest and netting the winner in the 111th minute.

The 24-year-old Japan winger drew a foul in a dangerous area outside the box, then stepped up to take the kick, bending it over the wall and into the bottom corner past Kaiserslautern keeper Andreas Luthe.

"I'm happy the team won," Doan said. "In that position, I thought we had the best chance if I kicked it. It was about making the best choice for the team."

Doan transferred to Freiburg from Dutch heavyweights PSV Eindhoven last month. He spent the 2020-21 season in Germany with Arminia Bielefeld on loan from PSV.

The Gamba Osaka youth product was among a handful of Samurai Blue players stepping out for the first time with new teams in the German Cup.

The 33-year-old, who made 154 English Premier League appearances for Southampton, joined re-promoted Schalke in an off-season move from Sampdoria in Italy's Serie A.

"I have respect (from my teammates) for my past career, but it's what I do from now that matters. I have to establish my position," said Yoshida, who wore the captain's armband for his new club.

"If I can secure my starting position, it could open up a new world," former Manchester City signee Itakura said.

The German top-flight season kicks of next weekend.