Japan lost 79-68 to Iran in the second round of basketball's Asian World Cup qualifying Thursday in Tehran, the already-qualified co-host of next year's tournament falling to its fifth defeat in seven Group F matches.

Yudai Baba starred for Japan with 27 points on 10-for-13 shooting from the floor and 5-for-6 from behind the arc, but only Makoto Hiejima with 11 points and Soichiro Inoue with nine provided any significant offensive support. 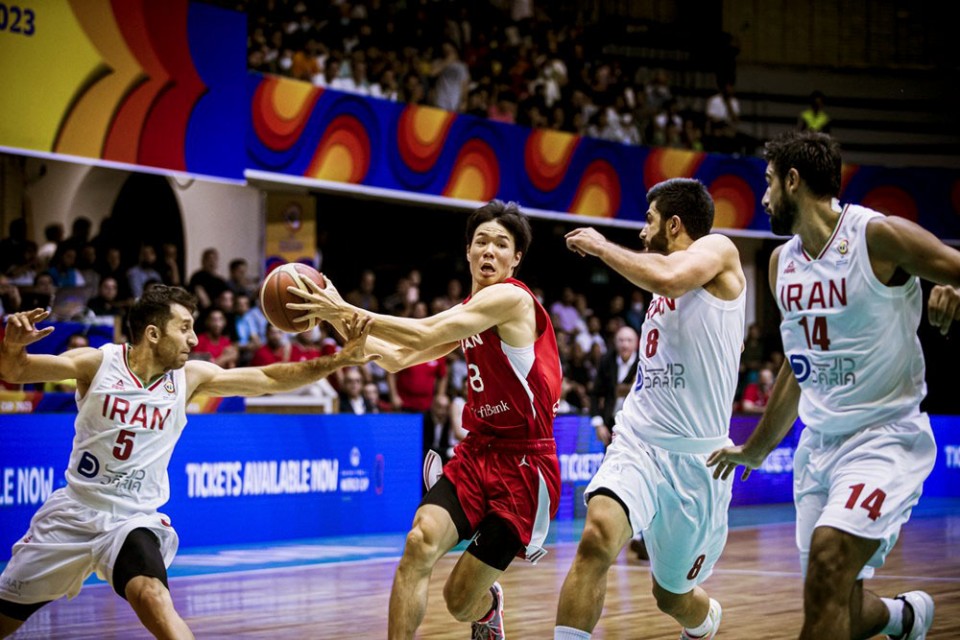 Yudai Baba (2nd from L) of Japan plays in a game against Iran in the second round of basketball's Asian World Cup qualifying in Tehran on Aug. 25, 2022. (Photo courtesy of the International Basketball Federation)(Kyodo)

Japan shot just 39.1 percent from the floor and was outrebounded 51-32 by Iran, with the home team commanding the offensive boards.

A hot shooting start, with seven first-quarter three-pointers, helped Akatsuki Japan lead 27-25 at the first break, but the physically imposing Iran, which lost both friendly warm-up games to Japan earlier this month, dominated in the paint to lead 44-32 by halftime.

Iran's lead blew out to 18 points at the end of the third.

The world No. 38-ranked Japan was without NBA players Rui Hachimura and Yuta Watanabe as well as American head coach Tom Hovasse, who could not travel due to the U.S. government's ban on its citizens entering Iran.

The 2023 FIBA World Cup will be co-hosted in Japan, Indonesia and the Philippines. Japan will welcome Kazakhstan in Okinawa in its next match on Tuesday.