KDDI Corp., a major Japanese telecom company, said Sunday it has finished work to restore services to up to 39.15 million mobile connections that have been affected by a network disruption for around two days, in what has been viewed as the industry's most serious outage to date.

But the "au" mobile brand operator stopped short of saying when its connections will fully recover after the failure not only prevented its users from making calls and getting online but also impacted such areas as banking, transmission of weather data, parcel deliveries and network-connected cars.

Internal Affairs and Communications Minister Yasushi Kaneko said in an ad hoc press conference he believes the disruption should be classified as a "serious incident."

KDDI, which is currently verifying its network, completed work to resume services in eastern Japan around 5:30 p.m. after most of its customers in the western part of the country were gradually regaining wireless access.

The company had prioritized restoring services to users in western Japan, with work completed at 11 a.m., due to an approaching typhoon.

Holding a press conference, KDDI President Makoto Takahashi apologized over the disruption, which began at around 1:35 a.m. Saturday, and said he would consider compensating individual and corporate users. 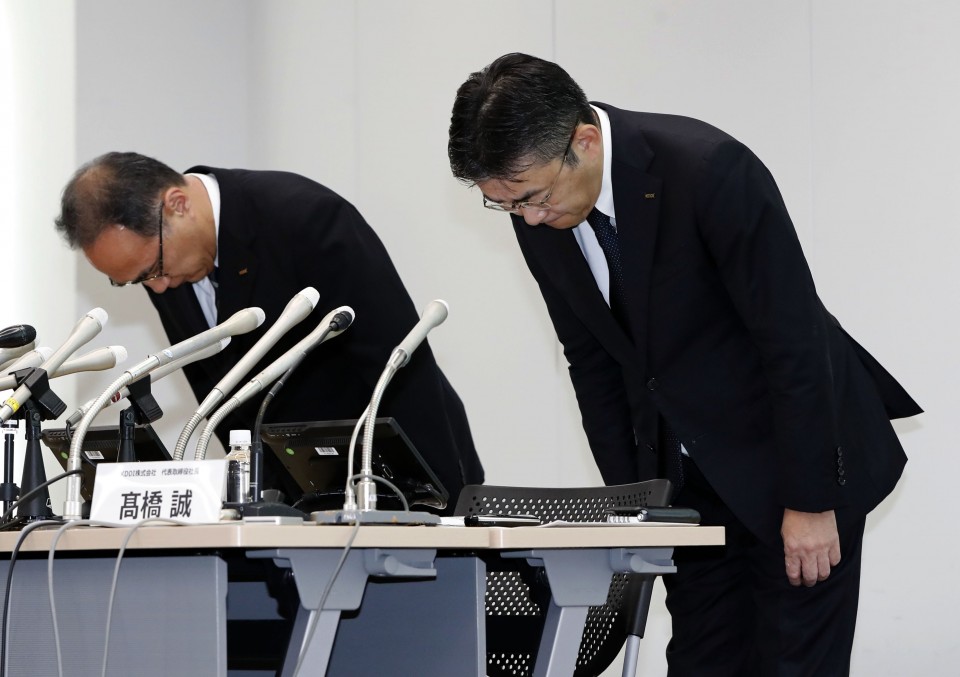 KDDI Corp. President Makoto Takahashi (R) bows in apology for the nationwide disruption of the company's mobile network at a press conference on July 3, 2022, in Tokyo. (Kyodo)

"This is the largest outage in the history of our company," Takahashi said.

KDDI said a problem occurred while replacing its switching system for voice calls during regular maintenance, with repair work triggering a concentration of traffic that led the company to reduce user access.

During that time, another system experienced a chain reaction of failures which further prolonged the connection difficulties.

The recent string of issues at major Japanese mobile carriers is "extremely regrettable," Kaneko said as he acknowledged that KDDI's outage was on a larger scale than NTT Docomo Inc.'s nationwide disruption last October.

Reiterating his call for carriers to keep in mind that cell phones are an important part of social infrastructure, Kaneko said appropriate steps would be taken to deal with the matter, hinting at the issuance of an administrative order.

The disruption that continued for an unprecedentedly long time caused numerous inconveniences. Passengers were briefly unable to use IC rechargeable cards on buses traveling in the Tokyo metropolitan area, while a regional bank said automated teller machines located outside its branches also could not be used.

The network problem has also affected its low-cost UQ Mobile brand and its lower-priced "povo" wireless customers, as well as smaller rivals leasing connections from the telecom company, such as Rakuten Mobile Inc.

As of March, KDDI was providing around 62 million mobile connections, with individual contracts for the au, UQ Mobile and povo brands accounting for about 31 million. 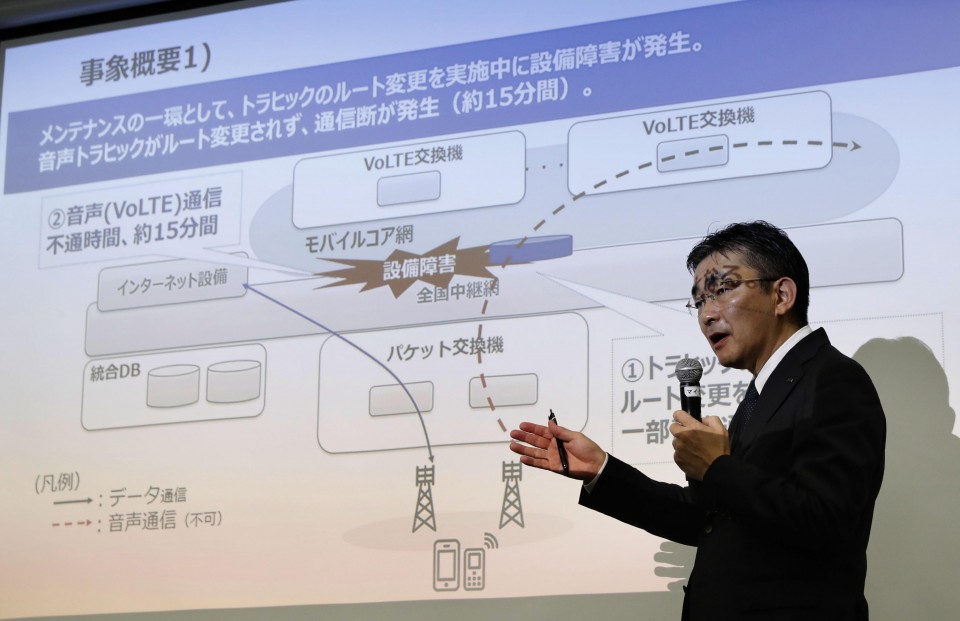 Japan's telecommunications business law stipulates that the government can classify a problem as a "serious incident" if 30,000 people or more who subscribe to services capable of dialing emergency numbers, such as 110 or 119, are affected for an hour or longer.

In October last year, Japan's largest mobile carrier by subscribers, NTT Docomo, suffered a system failure and was subsequently issued with an administrative order to prevent a recurrence.

The disruption, lasting around 29 hours and affecting at least 12.9 million users, was labeled a serious incident by the communications ministry.

SoftBank Corp., the country's third-largest mobile carrier by subscribers, in December 2018 also suffered an outage which affected around 30.6 million users. Its phone and data services were restored in around four and half hours.