China has apparently become wary that Japanese Prime Minister Fumio Kishida may adopt a hard-line approach to the Communist-led government after his ruling party enjoyed a sweeping victory in Sunday's upper house election. 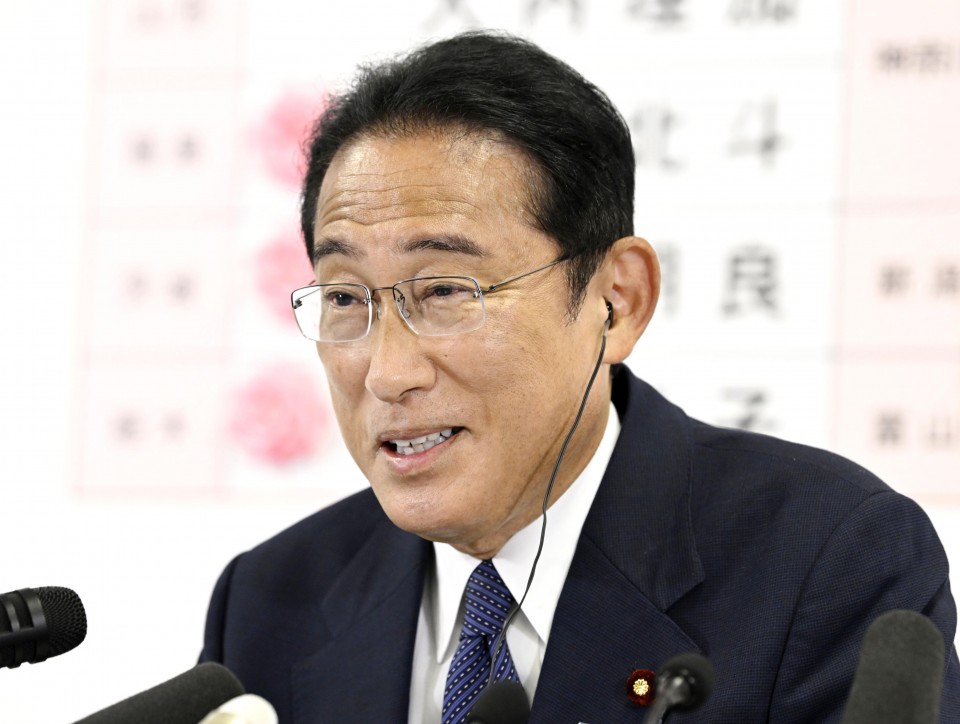 Japanese Prime Minister and Liberal Democratic Party leader Fumio Kishida has an interview at the party's headquarters in Tokyo as the results of the House of Councillors election come in on July 10, 2022. (Kyodo) ==Kyodo

Chinese President Xi Jinping is believed to be reluctant to avoid a diplomatic spat with Japan, as he has been keen to bolster his influence at home so he can secure a contentious third term as leader at the ruling Communist Party's twice-a-decade congress in the fall.

This year marks the 50th anniversary of the normalization of Sino-Japanese diplomatic ties, prompting Xi's leadership to attempt to improve bilateral relations in cooperation with Kishida's government.

Since Kishida took office in October 2021, Beijing has hoped that Tokyo would pursue a well-balanced diplomatic strategy toward the neighboring nation, with Yoshimasa Hayashi, seen as a "pro-China" lawmaker, serving as foreign minister, the sources said.

But a Chinese government source said, "We have to review the Kishida administration's policy toward China," given that he has started to pledge to carry on the "legacy" of Abe, who showed his commitment to amending Japan's U.S.-drafted pacifist Constitution.

Abe's remarks on security and nuclear issues in East Asia as well as Taiwan, considered by China as a renegade province to be reunified with the mainland by force if necessary, often flayed relations between Beijing and Tokyo.

The Global Times, a tabloid of the Communist Party, said Sunday, "For the Chinese public, Abe was a controversial political figure," citing his frequent visits to Tokyo's Yasukuni shrine enshrining Class-A criminals responsible for Japan's war of aggression.

By denying Japan's invasion history, Abe gained a "bad reputation" in China and other Asian countries, which were invaded by the now-defunct Imperial Japanese forces before and during World War II, the newspaper added.

Abe, a 67-year-old lawmaker who became Japan's longest-serving prime minister, died on Friday after he was shot by a gunman in the western city of Nara while campaigning ahead of the election.

From 2006 to 2007, Abe served as prime minister and again from 2012 to 2020. After stepping down, he became the head of the largest faction within the ruling Liberal Democratic Party, retaining clout over the current administration of Kishida.

In the early 2010s, Beijing and Tokyo were mired in a row over the uninhabited islets in the East China Sea. The dispute intensified after the Japanese government of then Prime Minister Yoshihiko Noda brought them under state control in September 2012.

During his tenure as prime minister, Abe tried to restore Japan's ties with China, while effectively shelving some political matters between the two nations, including the Senkaku Islands, administered by Tokyo and claimed by Beijing, which calls them Diaoyu.

In 2019, Abe invited the Chinese president to visit Japan as a state guest for the first time since Xi came to power in 2013, though the trip was postponed in the wake of the COVID-19 pandemic.

In a message of condolence to Kishida over Abe's death, Xi said he had reached important consensus with Abe on building a China-Japan relationship that meets the requirements of the new era, according to the official Xinhua News Agency.

After he resigned as prime minister in 2020, however, Abe irritated Beijing with aggressive comments on the security situation surrounding East Asia and Taiwan, with foreign affairs experts saying he escalated China-Japan tensions.

In December 2021, Abe said any emergency concerning self-ruled Taiwan would be an emergency for Japan and the Japan-U.S. security alliance, triggering a harsh backlash from mainland China. He also voiced hope of visiting the democratic island.

Japan cut diplomatic ties with Taiwan and established them with mainland China in 1972. A joint communique signed that year stipulates China "reiterates that Taiwan is an inalienable part of the territory" and Japan "fully understands and respects this stand."

Earlier this year, Abe said Japan should discuss whether to seek a nuclear sharing arrangement similar to the North Atlantic Treaty Organization's policy to counter nuclear-armed countries near Japan, such as Russia, North Korea and China.

If Japan -- which had two cities, Hiroshima and Nagasaki, devastated by U.S. atomic bombs in World War II -- wants to hold nuclear weapons, a constitutional amendment is needed, most likely drawing a rebuke from China.

"We hope that Japan will earnestly learn the lessons of history, adhere to the path of peaceful development and take concrete actions that would win the trust of its Asian neighbors and the international community," Wang told reporters in Beijing.

As a result of Sunday's election, Kishida's LDP, together with other pro-constitutional revision forces, forged a two-thirds majority in the upper house.

Should Kishida really inherit the legacy of Abe, relations between Japan and China would "certainly worsen further," a Japanese government source said.

"We want Prime Minister Kishida to communicate with China in a way that will not hurt bilateral ties," without giving thoughts to goals sought by Abe who frustrated China after he became "a kingmaker" of the LDP, the source added.