Representatives from Ukraine and Russia signed Friday an agreement to resume grain exports in a meeting mediated by the United Nations, as fears mount over a food crisis triggered by soaring commodity prices.

The deal, reached in Istanbul during a four-way meeting also including the United Nations and Turkey, will guarantee safe sea routes, after passage through the Black Sea was blocked due to Russia's invasion of Ukraine. 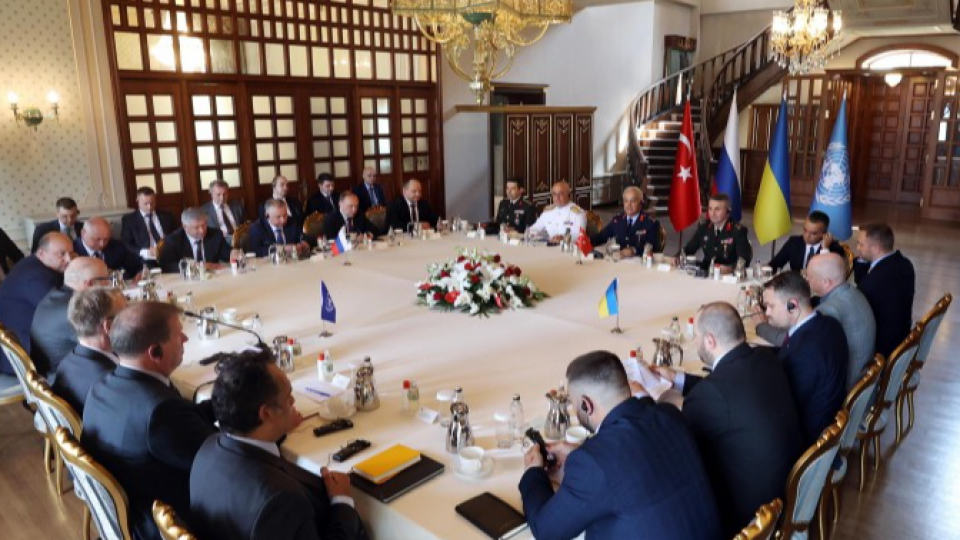 Military delegations from Turkey, Russia, Ukraine and U.N. officials attend a meeting to discuss shipment of Ukrainian grain stuck due to blockade of Black Sea ports, on July 13, 2022, at Kalender Pavilion in Istanbul, Turkey. (Anadolu Agency/Getty/Kyodo)

Delegates at the meeting agreed to establish a joint coordination center that will be managed by Ukraine, Russia, Turkey and the United Nations. U.N. Secretary General Antonio Guterres and Turkish President Recep Tayyip Erdogan were also in attendance.

The center will ensure safety in the entryways of Ukraine's harbors and check ships traveling through Turkish ports for weapons, while Russia and Ukraine are barred from attacking any commercial or private sector vessels traveling through the Black Sea.

Ukraine is a leading exporter of grains, but such exports have been obstructed by the Russian invasion, which on Sunday will mark five months since it was initiated.

Over 22 million tons of grain have been piling up within Ukraine, according to a U.S. think tank.