Defense Minister Nobuo Kishi conveyed to his Chinese counterpart on Sunday concern over a recent joint flight by Chinese and Russian bombers near Japan as a "show of force" against his nation.

Kishi told reporters after a meeting with Defense Minister Wei Fenghe in Singapore that he called for China's "self-restraint" in the East China and South China seas, airing strong concern over Beijing's ongoing "unilateral attempts to alter the status quo by force." 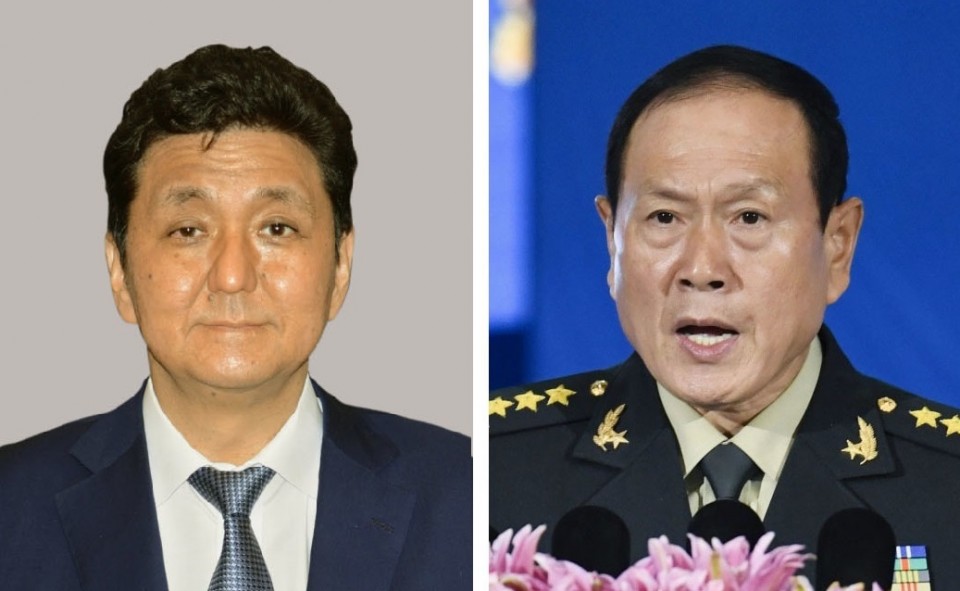 Meanwhile, the two ministers agreed to promote interactions and dialogue between the defense authorities of Tokyo and Beijing, according to Kishi, who said, "Since Japan-China relations have matters of concern, we need to have candid communication."

Kishi and Wei met on the sidelines of the three-day Asia Security Summit through Sunday, also known as the Shangri-La Dialogue. The talks were the first in-person meeting between the defense chiefs of the two neighbors since December 2019.

Late last month, six Chinese and Russian strategic bombers, including suspected ones, flew a long distance over the Sea of Japan, the East China Sea and the Pacific, according to Japan's Defense Ministry, in apparent protest at a summit of Japan, the United States, Australia and India in Tokyo held on the same day.

"A series of joint actions" by Beijing and Moscow, such as the joint flight, are still continuing, Kishi added, although he stopped short of elaborating.

The roughly hourlong talks also came as Chinese vessels have repeatedly intruded into waters near the Senkaku Islands in the East China Sea, a group of Tokyo-controlled, Beijing-claimed uninhabited islets that China calls Diaoyu.

Japanese officials including Kishi have expressed concern over the Chinese military's recent activities near Japan. These include fighter jets taking off from and landing on the Chinese aircraft carrier Liaoning near the southern prefecture of Okinawa, which is close to Taiwan, for a total of 12 days last month.

With China keeping military pressure on Taiwan, a self-ruled island viewed by it as part of its territory, Kishi also said he told Wei that peace and stability across the Taiwan Strait are also important for the international community.

Wei, in his remarks at the security summit Sunday, pledged that China "will definitely realize its reunification" with Taiwan and said that should the island seek independence, Beijing "will not hesitate to fight, we will fight at all costs, and we will fight to the very end."

The defense minister also sent a warning to the United States not to meddle in the Taiwan issue, saying Taiwan is its internal affairs and that "foreign interference is doomed to failure."

Last month, U.S. President Joe Biden stirred controversy by expressing his commitment to defending Taiwan if China tries to seize it by force. The remarks appeared to signal a break with Washington's policy of "strategic ambiguity" on whether it would defend Taiwan, but the White House denies any change to U.S. policy.

On Saturday, the defense chiefs of Japan, the United States and South Korea highlighted "the importance of peace and stability in the Taiwan Strait" in a joint statement issued after their talks.

It was the first reference to Taiwan in such a statement in defense ministerial talks among the three nations.

Criticizing Russia for its aggression against Ukraine, Kishi also urged China to "play a responsible role" in the global community as one of the five permanent members of the U.N. Security Council.

Beijing abstained from voting for a U.S.-led draft Security Council resolution condemning the Russian invasion in late February. The resolution was vetoed by Moscow, another permanent member of the council, exposing dysfunction of the United Nations in managing international disputes.

Earlier Sunday, Kishi also held separate meetings with his counterparts from Fiji, Australia and New Zealand. He confirmed with them that the nations would keep working together toward the realization of a free and open Indo-Pacific region, according to the Defense Ministry.

A free and open Indo-Pacific is a vision vigorously promoted by Japan and the United States to counter China's growing military and economic clout in the region.