Chinese Premier Li Keqiang has urged government officials to take steps to expand exports, as the world's second-biggest economy has become sluggish due largely to its radical "zero-COVID" policy, sources close to the matter said Thursday.

While China put emphasis on shoring up domestic demand in its five-year economic plan through 2025 with its prolonged trade dispute with the United States weighing on exports, it has apparently reversed course against a backdrop of a severe economic downturn.

As the all-encompassing COVID-19 constraints imposed by President Xi Jinping's leadership have dealt a heavy blow to private spending and investment at home, the influence of Li, who is mapping out economic policies, has increased, some China watchers said. 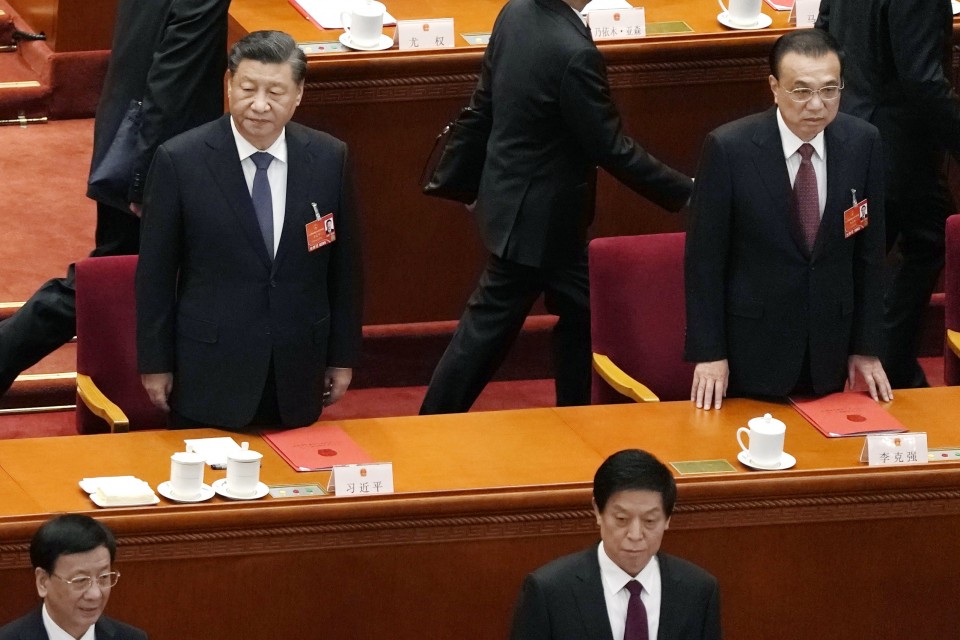 Chinese President Xi Jinping (Top L) and Premier Li Keqiang (Top R) attend the closing ceremony of the National People's Congress at the Great Hall of the People in Beijing on March 11, 2022. (Kyodo)

Since 2020, the Communist-led government has pledged to uphold a "dual circulation" strategy to bolster domestic demand while trying to boost exports, but Li may have concluded it is more necessary to sell Chinese products abroad to prop up the broader economy.

Xi might also be forced to depend on Li, given that economic stability is essential for the power of the president, who has been striving to secure a controversial third term as leader at the ruling Communist Party's twice-a-decade congress in the fall, the watchers said.

During the January to March period, China's economy grew only 4.8 percent from a year earlier and is expected to slow further in the aftermath of a two-month-long lockdown of Shanghai, the nation's financial and commercial hub with a population of about 25 million.

In China, people living in areas under lockdown are banned from stepping out of their homes, causing them to struggle to purchase food items and daily necessities. The lockdown in Shanghai, which had started in a phased manner on March 28, was lifted on Wednesday.

According to the sources, Li told Xi it is difficult to stimulate domestic demand under the zero-COVID policy and China should implement measures to jack up exports to other countries, whose economies are recovering from the novel coronavirus shock.

Xi has agreed with the proposal by Li, who said earlier this year that achieving the central government's gross domestic product growth goal of around 5.5 percent in 2022 is "not easy," the Chinese sources said.

In a bid to expand exports, Li has asked local government officials to prohibit companies from suspending operations at their factories, the sources said, adding some municipal authorities have already begun to increase tax refunds on exports.

While Li is due to step down in 2023 after serving two five-year terms as premier, he is believed to have regained his clout although Xi has been attempting to concentrate power in his hands over the years.