Japanese Prime Minister Fumio Kishida welcomed Sweden's "historic" decision to join the North Atlantic Treaty Organization and agreed with his Swedish counterpart to oppose any unilateral use of force to change the status quo amid Russia's invasion of Ukraine.

Kishida and Sweden's Magdalena Andersson, meeting on the fringes of a NATO summit in Madrid, agreed to step up bilateral cooperation as Japan takes over the Group of Seven presidency next year and Sweden will chair the Council of the European Union. 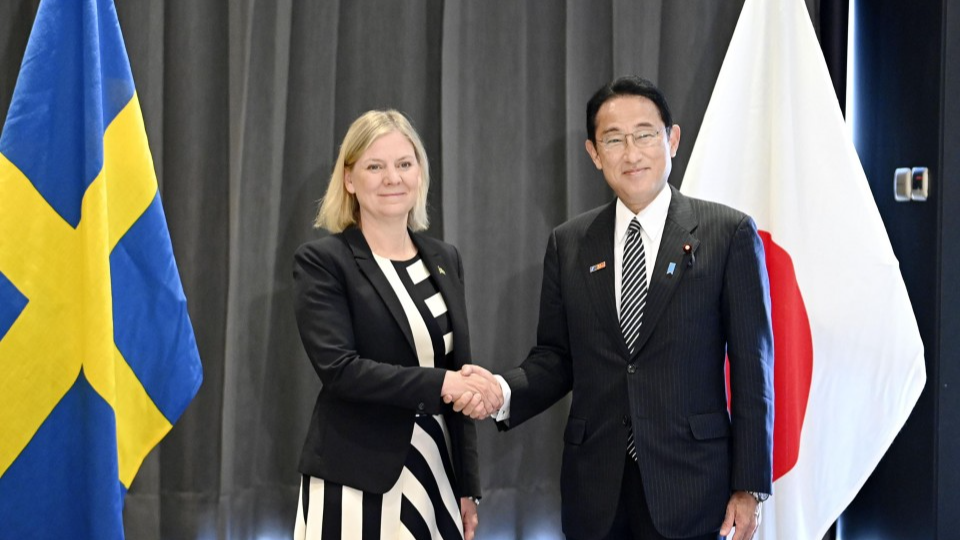 Turkey had opposed the accession of Sweden and Finland to NATO, claiming that the two countries support people who Ankara deems terrorists.

But Turkey has withdrawn its opposition to the accession after it had an agreement with the two nations that addresses its concerns. Sweden and Finland have now committed to supporting Turkey against threats to its national security.

The move cleared an obstacle to the two countries' future membership.

During the meeting, Kishida praised Andersson's efforts at securing support from Turkey, efforts the Swedish prime minister characterized as challenging, according to the Japanese Foreign Ministry.

Both leaders agreed Russia's invasion of Ukraine has shaken the foundation of order, not just in Europe but also in Asia, and that coordination among nations sharing the same basic values is more important than ever, the ministry said.

As Kishida is pushing for a nuclear-weapons-free world, the two leaders confirmed they will cooperate on realizing a successful U.N. review conference on the Treaty on the Non-Proliferation of Nuclear Weapons in August.

Japan and Sweden are not members of NATO but were invited to the two-day summit.