Japanese Prime Minister Fumio Kishida is projecting himself as a pragmatic leader whose diplomatic decisions can be unconventional.

Kishida used his attendance at a Group of Seven summit in southern Germany to show that the hardening of Japan's stance on Russia is real and Tokyo is firmly aligned with the rich club in adding sanctions to pressure Moscow to end the war in Ukraine.

In a symbolic move, he then traveled to Spain as the first Japanese leader to participate in a summit of the North Atlantic Treaty Organization that provides collective defense for its members, sending a message to Russia -- and an increasingly assertive China -- that their behavior will be watched.

Japan, a NATO partner, will strengthen ties with the 30-member military alliance, he said. 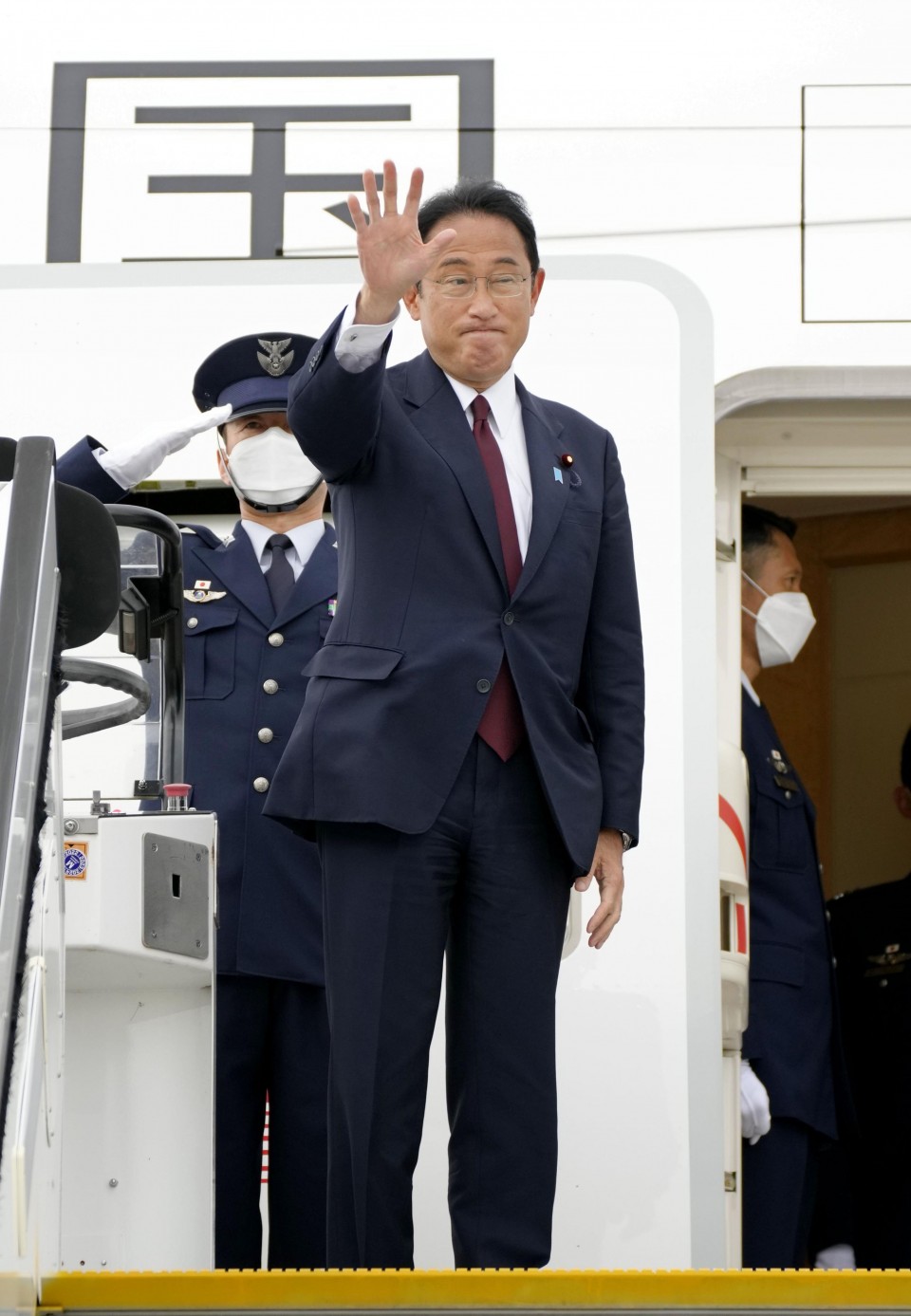 Japanese Prime Minister Fumio Kishida waves before boarding a government plane in Munich on June 28, 2022, following his attendance at a Group of Seven summit in southern Germany. Kishida will attend a two-day summit of the North Atlantic Treaty Organization from June 29 in Madrid. (Kyodo) ==Kyodo

Viewed as a liberal-leaning lawmaker, soft-spoken Kishida has said he will be "thoroughly realistic" when his country faces history-making challenges.

For some, a series of diplomatic decisions made since he took office last year, and especially after Russia launched its attack on Ukraine in late February, are already eye-openers.

"Mr. Kishida is doing things that former Prime Minister Shinzo Abe would not have achieved, such as taking a hard-line stance on Russia and boosting defense spending. And he does not seem to be raising a sense of alarm among the public because he is known to be moderate," said Ken Jimbo, a professor at Keio University.

"Gone are the days when Japan can focus on China as long as it manages its relations with Russia. Russia and China are now adding pressure on Japan and there is the threat of a nuclear-armed North Korea," said Jimbo, an expert on international security.

Kishida weighed the need to embark on the trip to Germany and Spain amid the severity of the security environment against remaining in Japan where campaigning is under way for an upper house election on July 10.

The prime minister has vowed to fundamentally reinforce Japan's defense and secure a substantial increase in defense spending. His ruling Liberal Democratic Party is aiming to double the country's defense spending to 2 percent or more of gross domestic product, on a par with NATO members.

During talks with his counterparts, Kishida explained such plans, warning, "Ukraine today may be Asia tomorrow," a phrase he frequently uses to underscore his sense of urgency, a senior Japanese government official said. He used strong language to say the G-7 needs to prevent other nations from drawing the "wrong lessons" from the Ukraine crisis, with China in mind.

Kishida served as foreign minister under Abe, a conservative LDP lawmaker who paved the way for Japan to exercise the right to collective self-defense, or coming to the aid of allies even when Japan itself is not under attack. Abe had sought to build rapport with Russian President Vladimir Putin to resolve a territorial dispute over islands called the Northern Territories by Tokyo and the Southern Kurils by Moscow.

Japan slapped a slew of sanctions on Russia in response to its war in Ukraine and froze an economic cooperation plan pushed by Abe. At the G-7 summit, Kishida announced another round of punitive measures. Among them, Japan joined some other members in placing a ban on gold imports from major producer Russia.

"Russia itself seems to have been taken aback by the strength of Japan's response (following the war)," said James Brown, an associate professor at Temple University in Tokyo, who is an expert on Japan-Russia relations. "Under Abe, Russia got the impression that Japan was a soft touch. Kishida has shown that this is no longer the case."

The prospects for progress toward resolving the territorial issue and reaching a postwar peace treaty now look low.

For economic reasons, Kishida also needs to take a tough approach to Russia, whose invasion of Ukraine has sent energy, commodity and food prices higher, raising the cost of living for households, a sensitive issue ahead of the national election.

Experts say Kishida's attendance at the NATO summit will send a strong message to Russia and China that Japan is on the alliance's side. The real work will now begin on shaping how Japan and the military alliance deepen cooperation in Europe and the Indo-Pacific. 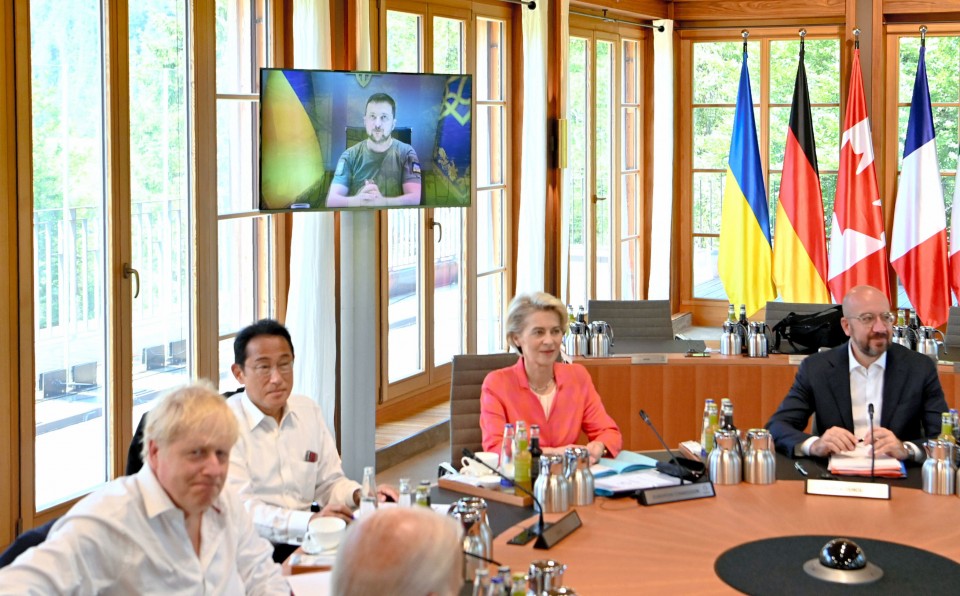 Shortly after the G-7 summit ended, Kishida said he called for the group's unity in opposing unilateral attempts to change the status quo by force and a great amount of time was spent discussing issues related to China.

The group consists of Britain, Canada, France, Germany, Italy, Japan and the United States plus the European Union.

"What Japan can do and is expected to do is to provide proper input on China," said Atsuko Higashino, a professor at the University of Tsukuba, who is well versed on NATO.

NATO knows Japan well after years of partnership and is unlikely to demand something that goes beyond the limits of the war-renouncing Article 9 of the country's Constitution, despite some domestic concern that Japan will be dragged into the military alliance, Higashino said.

"At the same time, Japan's stance on China will come under greater scrutiny because NATO is not only a military alliance but an organization that places emphasis on fundamental values like human rights. Japan cannot warn of the threat of China while not being hard on human rights issues," she said.