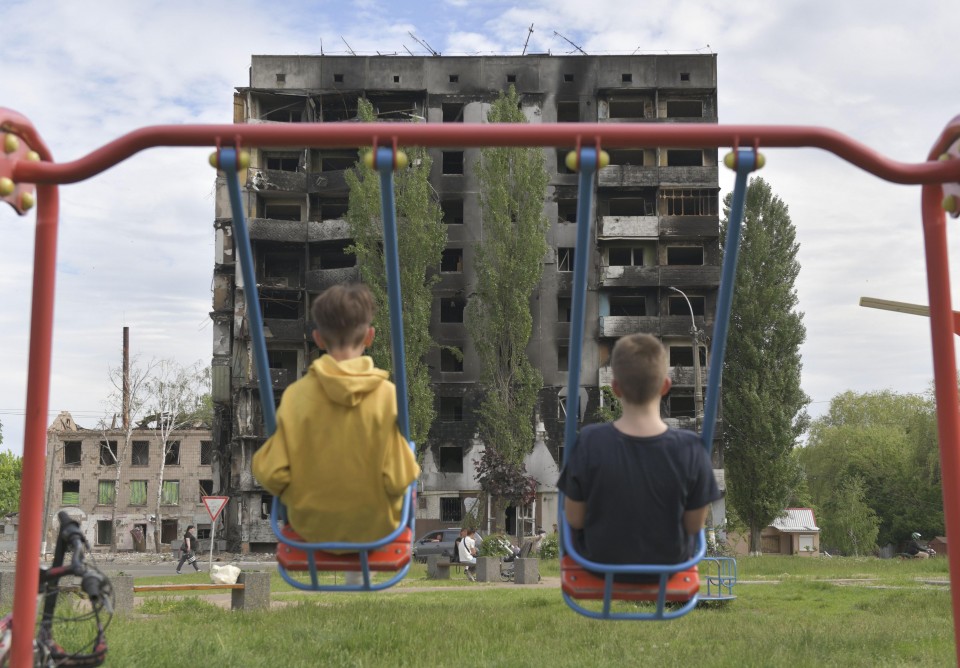 Children sit in swings at a park near a condominium damaged by Russia's military attacks in the suburbs of Kyiv on May 25, 2022. (Kyodo) ==Kyodo

TOKYO - The number of babies born in Japan fell to a record low of 811,604 in 2021, showing that the number of children in the country is declining faster than the government anticipated, according to data released Friday.

The decline of 29,231 from the previous year means the country's annual newborns have already fallen to the level that the government's 2017 study forecast for 2027.

FUKUSHIMA, Japan - More than a decade since the March 2011 nuclear disaster, some registered residents of part of a Fukushima village made off-limits by high radiation levels can finally return home after the government decided Friday to lift evacuation orders on June 12.

A 0.95 square kilometer part of Katsurao, located near the defunct Fukushima Daiichi nuclear power plant, will have its "difficult-to-return" zone classification lifted, the government's nuclear emergency response headquarters and the Reconstruction Agency agreed in a joint meeting.

SEOUL/TOKYO - Senior diplomats from South Korea, Japan and the United States on Friday agreed to bolster their security cooperation and deterrence against North Korea, condemning its repeated ballistic missile launches amid growing concerns over a possible nuclear test by Pyongyang.

During a meeting in Seoul, Sung Kim, U.S. special representative for North Korean affairs, and his South Korean and Japanese counterparts, Kim Gunn and Takehiro Funakoshi, also confirmed their shared view that the North's reinforcement of nuclear and missile development is "a clear and serious challenge to the international community," the Japanese Foreign Ministry said in a statement.

TOKYO - Japan is planning to compile a supplementary budget worth more than 10 trillion yen ($77 billion) after this summer's upper house election to finance measures aimed at stimulating the economy and mitigating the impact of rising prices, government sources said Friday.

The government is likely to issue more bonds for the envisaged second extra budget for fiscal 2022 starting in April, according to the sources, which would further deteriorate Japan's fiscal health.

WASHINGTON - The U.S. government on Thursday imposed further sanctions on Moscow over its invasion of Ukraine, targeting yachts linked to Russian President Vladimir Putin and a cellist allegedly serving as his middleman, among others.

Noting that Putin and other Russian elites rely on complex support networks to hide their wealth and luxury assets, Brian Nelson, a Treasury Department official, said, "Today's action demonstrates that Treasury can and will go after those responsible for shielding and maintaining these ill-gotten interests."

NEW YORK - Shohei Ohtani gave up three early home runs and was charged with his fourth loss Thursday as the Los Angeles Angels fell 6-1 to the New York Yankees in the first half of a doubleheader.

Ohtani (3-4) hoped to make amends after being knocked out in the first inning of his previous start at Yankee Stadium 11 months ago, but the Yankees once again had answers for the two-way star, ushering him to another early exit.