When the coronavirus pandemic began over two years ago, people in Japan quickly donned masks en masse with little complaint. But now the government has relaxed its guidance on outdoor mask usage, the message appears not to be filtering through.

On May 23, the ministry of health changed its advice to approve removing face coverings outside provided people maintain 2 meters' distance from each other and do not converse. Quiet, spacious indoor environments can also be used mask-free, it said.

But Tokyo's streets have since shown few signs of a mass unmasking, in an outcome anticipated by a survey released the day after the relaxation. A sample of 708 employed adults taken between May 11 and 16 by polling firm Laibo found just 30.3 percent of people would unmask because the government said it was okay to do so. 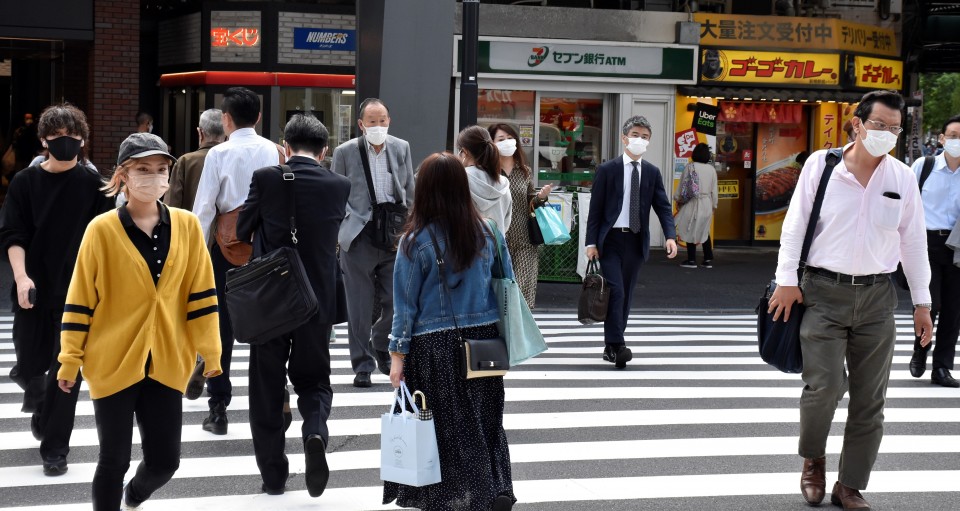 Kazuya Nakayachi, a psychology professor at Kyoto's Doshisha University specializing in trust and risk perception, says that rather than following government advice, people wear masks because they see others with them on.

More likely to be effective in changing behavior, he said, is encouragement to unmask from employers and other organizations closer to people's lives. Then, he said, the domino effect that saw people quickly don masks in large numbers could suddenly go into reverse.

In the meantime, though, unlike in some Western countries, Japan's patience with mask wearing is unlikely to run out soon. Tomohisa Sumida, a mask historian and visiting research fellow at Tokyo's Keio University, for instance, notes that mask-wearing is deeply ingrained in Japanese society.

Masks are present in people's lives from as early as elementary school, he says. At lunchtime, class lunch monitors wear masks to avoid contaminating food served to classmates. 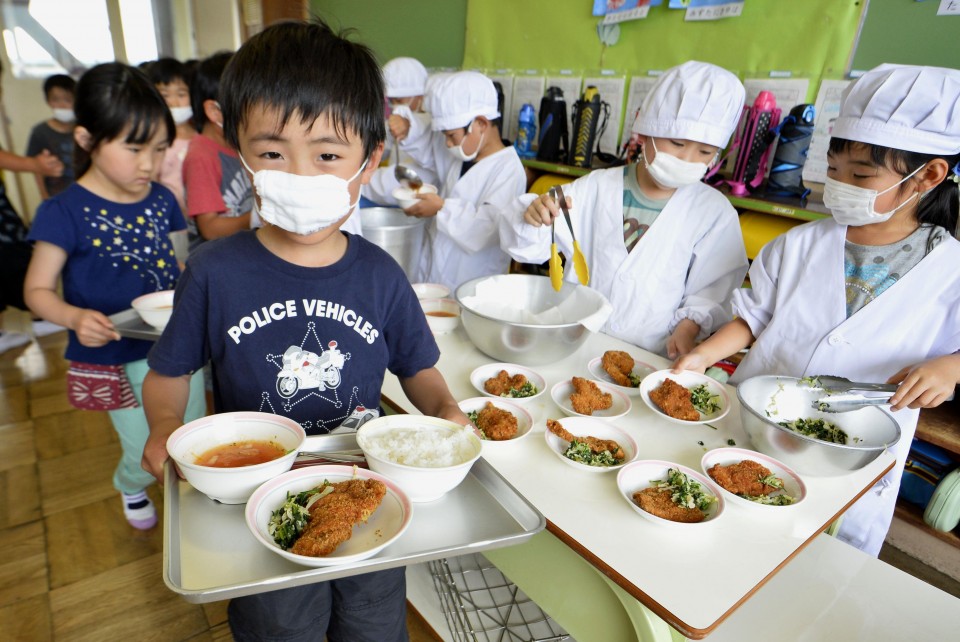 The early lesson is that "mask wearing isn't for the wearer, but for others," he said. Prior to the pandemic, for instance, people tended to don masks after catching a cold, rather than to avoid one.

First introduced to Japan in the 19th century from Britain, masks are thought to have initially been used for infection prevention during early 20th century Osaka plague outbreaks. Recent exponential rises in hay fever sufferers are among factors pushing usage even further, he said. The proportion of sufferers reached 42.5 percent in 2019, according to government figures.

Japan's pandemic mask usage has therefore been high enough to see it top 14 countries and regions in a May 26 survey by the Nippon Research Center with British market research firm YouGov. In April 2021, 89 percent of people were masking up, with the proportion down by just 2 percentage points in April 2022. 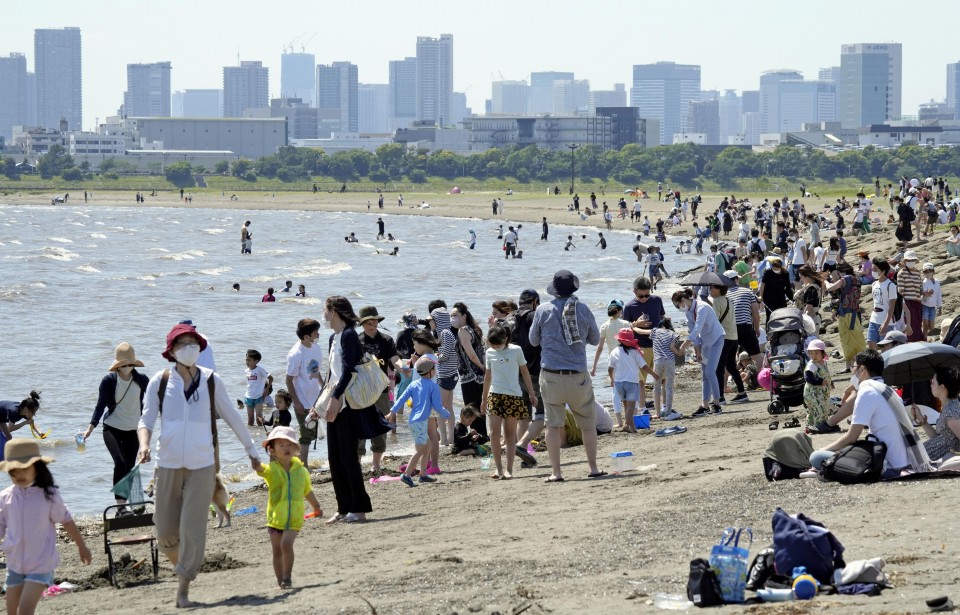 People, many of them masked, visit a beach at Kasai Marine Park in Tokyo during unseasonably hot weather on May 29, 2022, the first weekend after guidance on outdoor use of face coverings was eased. (Kyodo)

Out on the streets of Tokyo, opinions diverged even among the maskless on how far to acknowledge the government's latest guidance.

Yoshifumi Mizuno, 73, who often takes bare-faced strolls along the Sumida River with his wife, was critical of people's reliance on masks, including when alone in their cars, and said government messaging "hasn't been clear enough" to get people to take them off.

But Masahide Inoue, 65, whose face was also uncovered when no one was nearby, is nevertheless reluctant to see further easing.

The Laibo survey suggested that, rather than government advice, people place far more importance on the development of effective COVID-19 treatments when deciding whether to wear masks, with 48.5 percent saying they would be happy to unmask under such circumstances.

Yoko Yoshida, a Tokyo resident who only goes maskless to walk her dog, expressed such a view. "I think it would be fine to remove our masks if there was some official medication. After that it's an individual judgment. The government's view is an individual judgment, too. You can't just accept everything they say," she said.

Lawyer Niharika Dhall, 33, from India, has lived in Japan since March 2020 and masks up around others. She says her time in the country has made her more sympathetic of facial coverings. "I think it makes people feel safer, and I think that's important because people have lived through a difficult, unsafe time," she said. 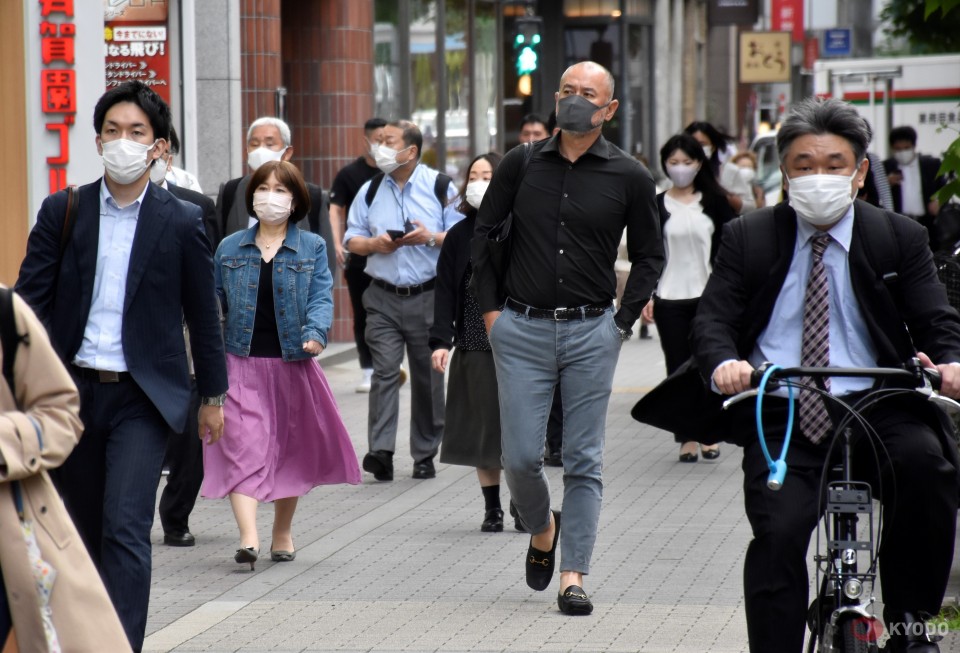 Nakayachi, meanwhile, warned against simple contrasts ascribing Japan with a collectivist mentality to masks as opposed to a Western, individual-choice approach. The conformist argument, rather, can be made regardless of country.

"In the United States, rallies for then-President Donald Trump saw people encouraged not to wear masks. Conversely, Democratic Party supporters wore them. That, too, is a kind of conformity and collectivism," Nakayachi said.

Sumida, the mask historian, suggested choosing to eschew masks in countries unused to them is itself a manifestation of local social pressures.

"It's often said social pressure to conform is partly why Japanese people wear masks. But if we think about the world before coronavirus, couldn't we say there was also social pressure in Western countries to not wear masks in daily life?"

But he added, "I do wish personally that people were a little less worried about what those around them think, and that more people would take off their masks. I don't have mine on outside, and I do think people use them too much."

Still, a complete end to Japan's mask advisories appears a ways off, with Prime Minister Fumio Kishida ruling out comprehensively scrapping guidance as "currently unrealistic" during a May 31 House of Representatives' budget committee.