Flights between the capitals of South Korea and Japan resumed Wednesday after being suspended for more than two years due to the coronavirus pandemic.

Four airlines from the two countries -- Korean Air and Asiana Airlines of South Korea and Japan Airlines and All Nippon Airways -- started operating a total of eight round trips a week through the route between Seoul's Gimpo airport and Tokyo's Haneda airport.

Kim Eun Jeong, an official of Asiana Airlines, said, "I hope (the flight resumption) will be a catalyst for overcoming coronavirus and revitalizing South Korea-Japan exchanges," prior to the departure of the first flight of the airline. 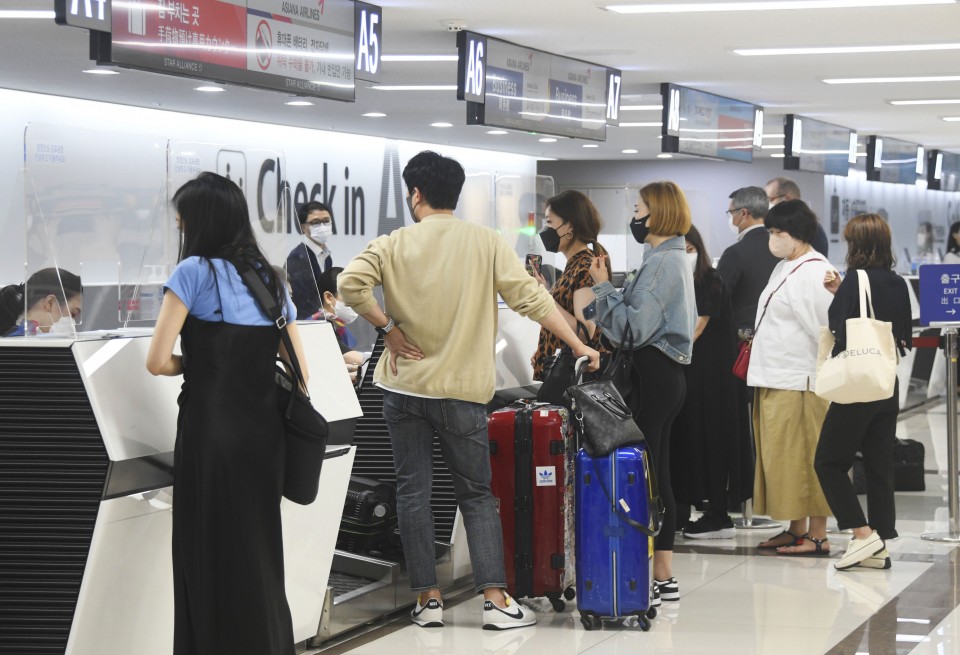 Passengers go through boarding procedures at Gimpo airport in Seoul on June 29, 2022, as flights between the South Korean airport and Tokyo's Haneda airport partially reopened the same day following a more than two-year suspension due to the coronavirus pandemic. (Kyodo) ==Kyodo

Kim Doo Hwan, head of the Seoul Regional Headquarters of the Korea Airports Corp., expressed the organization's expectation to restart flights between Kansai and Seoul soon.

Seoul and Tokyo last week agreed to resume the route between Gimpo and Haneda airports, both close to their respective city centers, with hopes it would help boost exchanges between the two countries.

South Korean President Yoon Suk Yeol, an advocate of improving bilateral ties after years of friction over wartime issues, had shown a willingness to see the flights resume.

South Korea's Justice Ministry said Wednesday it will simplify the process of issuing visas to tourists from Japan and several other countries starting Friday, in a move to increase the number of visitors from overseas.