An estimated 30,000 people participated in New York City's 53rd annual Pride March in late June, marking the return of the LGBTQ rights demonstration to a fully in-person format for the first time since the coronavirus pandemic began.

Held annually since 1970, the event originally commemorated the one-year anniversary of spontaneous protests and clashes with police following a June 1969 raid on a gay bar called the Stonewall Inn. The march was initially called Christopher Street Liberation Day in honor of the area in lower Manhattan where the uprising occurred.

With a theme this year of "Unapologetically Us," the first fully in-person Pride March in three years drew large crowds along the route, with spectators thronging sidewalks and climbing scaffolding to watch Sunday's festivities.

Aika Takeshima, a 36-year-old dance artist from Osaka Prefecture who is currently based in New York, marched in the event for the first time, leading a group of about 70 people organized with help from her partner Sara Pizzi, 23. 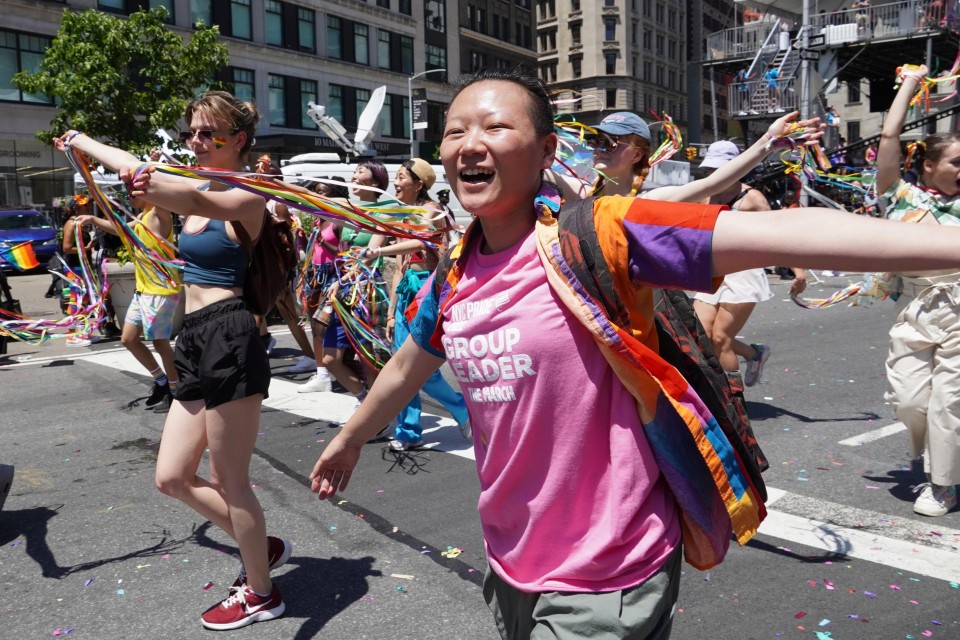 "I watched the Pride March eight years ago and saw that non-LGBTQ people also celebrated," Takeshima said. "It was then I realized there was nothing negative about being different."

"This time, I would like to give back as a performer," she added.

The march took place two days after the Supreme Court issued a decision overturning a landmark 1973 ruling in the Roe v. Wade case, which had guaranteed the right to abortion under the U.S. Constitution. The court's latest ruling opens the door to abortion bans at the state level for the first time in decades.

In response to the decision, Planned Parenthood, an American reproductive healthcare services organization, was placed at the head of the march. Many of the marchers and spectators carried signs protesting the top court's controversial decision.

Among the participants who were concerned about the ruling was Keely Segui, an 18-year-old student from Hartford, Connecticut.

When asked about the possibility of abortion being made illegal, she said, "I live in a blue state, so I'm not sure that's going to happen where I live," referring to the Democratic leadership which supports abortion rights.

"But I'm worried for all these people who might not have the luxury to move away" from more restrictive states, she said.

Akihito Otani, 42, of Osaka Prefecture, who identifies as gay and runs a bar in Manhattan that is seen as LGBTQ-friendly, also made the connection between court rulings and broader societal attitudes.

Since a Supreme Court ruling in 2015 that struck down bans on same-sex marriage as unconstitutional, Otani has witnessed greater acceptance of LGBTQ people, and noted that "a legal system that recognizes LGBTQ rights could allow more people to come out in Japan."

Natalie Alford, a 19-year-old university student, emphasized the inclusivity of the Pride March.

"It's an event for anyone who is a strong believer and an ally" in the ongoing struggle for equal rights for the LGBTQ community, Alford said.