The Ukraine and U.S. ambassadors to Tokyo called on the Japanese public Monday to give to a newly launched fund helping Ukrainian evacuees adjust to life in Japan, including with language-learning aid.

To ensure evacuees can become linguistically competent to find jobs and lead fulfilling lives, the fund covers tuition at Japanese language schools and pays scholarships. It will also offer everyday items like cards for public transportation, and some cash will go to facilitating experiencing Japanese summer festivals.

At a press conference at the foundation's Tokyo headquarters, Korsunsky stressed the fund is not just "spending money," and cited future potential IT and agricultural partnerships to call it an "investment of Japan into the nation which will always be friendly to you, which can help you in many terms in the future." 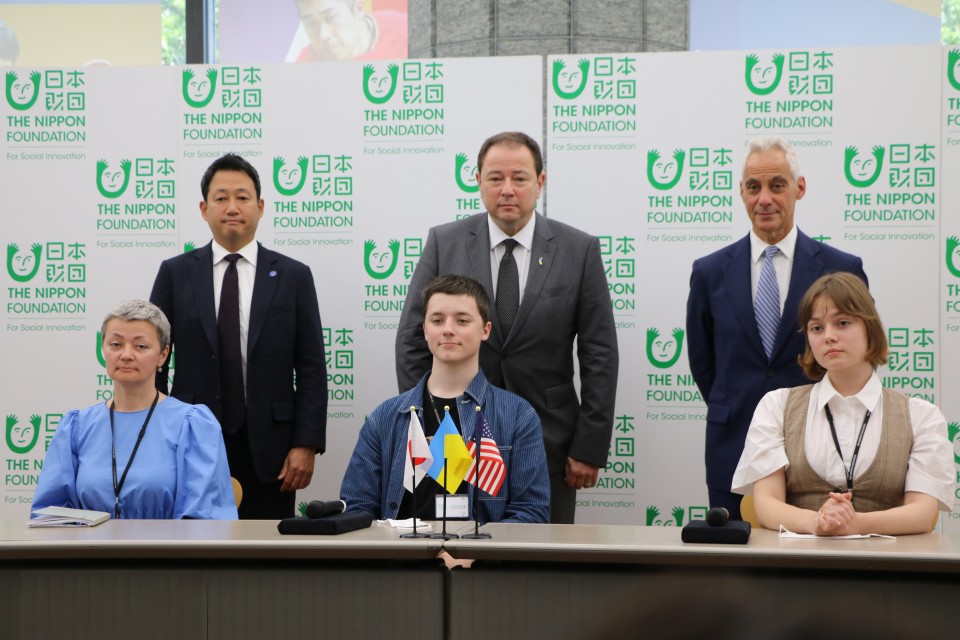 Mark Yelenets (C, front row), Ukrainian Ambassador to Japan Sergiy Korsunsky (C, back row), and U.S. Ambassador to Japan Rahm Emanuel (R, back row) are seen among the attendees to a press conference at the Nippon Foundation's Tokyo headquarters to announce a new donations-financed fund supporting Ukrainian evacuees in Japan, on June 13, 2022. (Kyodo)

Emanuel, who approached the foundation about the fund, praised Japan's response to Ukrainians' plight so far, saying, "The Japanese people have stepped up since day one, and opened their hearts, opened their homes and opened their wallets, and we're asking them to continue to do that."

Also attending were evacuees Oksana Bila, 48, and her son Mark Yelenets, 22, and daughter Rimma Yelenets-Memor, 18. Mark said the family, who arrived in May, is "really grateful" for educational support because it offers the "possibility to be directly integrated into the society by learning the language, by learning the culture."

Tuition for language classes can cost 700,000 to 800,000 yen annually plus enrollment fees, according to the foundation, which said the money would also help Japanese language schools struggling due to the coronavirus pandemic.

Other Nippon Foundation Ukraine initiatives have included a fund announced in March providing around 5 billion yen to evacuees and nongovernment organizations helping them.

Ukrainian nationals evacuating to Japan can currently stay up to a year. They receive temporary visitor 90-day visas upon arrival, which can be upgraded to designated activities visas affording a year's residence and work eligibility.

An estimated 4.9 million people have fled Ukraine for other countries in Europe, UNHCR figures on June 9 showed.

Contributions to the fund can be made at the following link (https://kifu.www.nippon-foundation.or.jp/ukrsp/), with payment options including credit card or bank transfer.