All Blacks star Damian McKenzie steered Tokyo Sungoliath to a 30-24 victory over Brave Lupus Tokyo in a gripping League One semifinal battle on Saturday.

The momentum swung back and forth between the two sides at Osaka Prefecture's Hanazono Rugby Stadium before Ryoto Nakamura's 59th-minute try gave Sungoliath the lead for good. 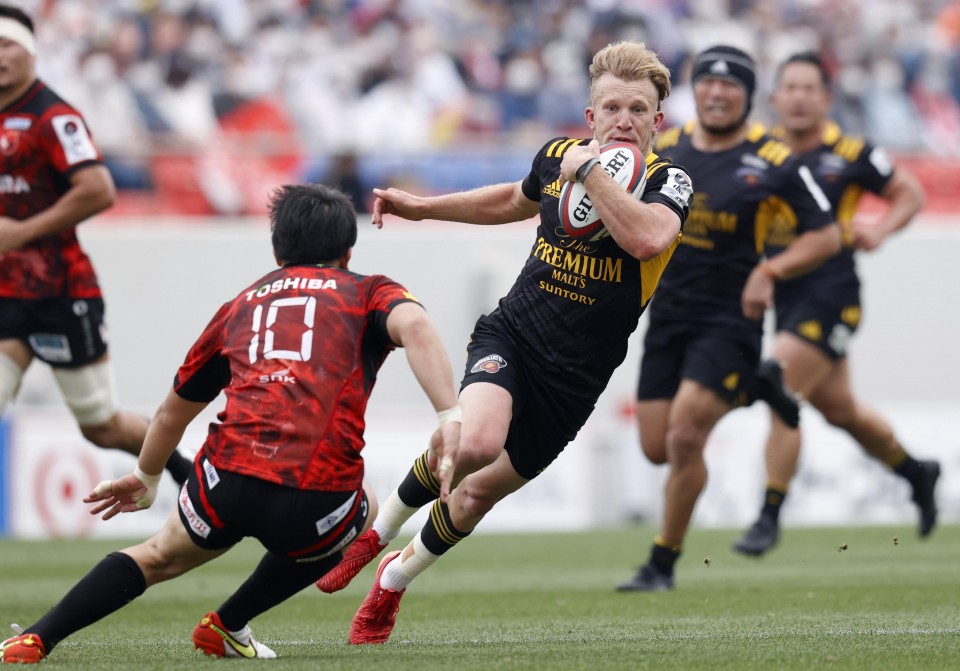 Damian McKenzie of Tokyo Sungoliath in action during the first half of a Japan Rugby League One playoff tournament semifinal against Brave Lupus Tokyo at Hanazono Rugby Stadium in Higashiosaka, Osaka Prefecture, on May 21, 2022. (Kyodo)

With fullback McKenzie providing pinpoint kicking and tough tackling in big moments, the Milton Haig-coached Sungoliath, who finished the regular season top of the table, were able to hold off a late surge from fourth-placed Brave Lupus.

They will play the winner of Sunday's semifinal between Saitama Wild Knights and Spears Funabashi Tokyo Bay for the inaugural League One championship a week from Sunday at Tokyo's National Stadium.

McKenzie missed an early penalty before Hayata Nakao put Brave Lupus on the board with a successful three-point attempt in the 17th minute.

Sungoliath scored the first try seven minutes later, when winger Seiya Ozaki intercepted a pass intended for Brave Lupus flanker Michael Leitch and sprinted across from deep inside his own half.

Brave Lupus went back in front after Jacob Pierce dotted down off a rolling maul, but the lead was short-lived, with McKenzie leveling the scores at 10-10 from a penalty. 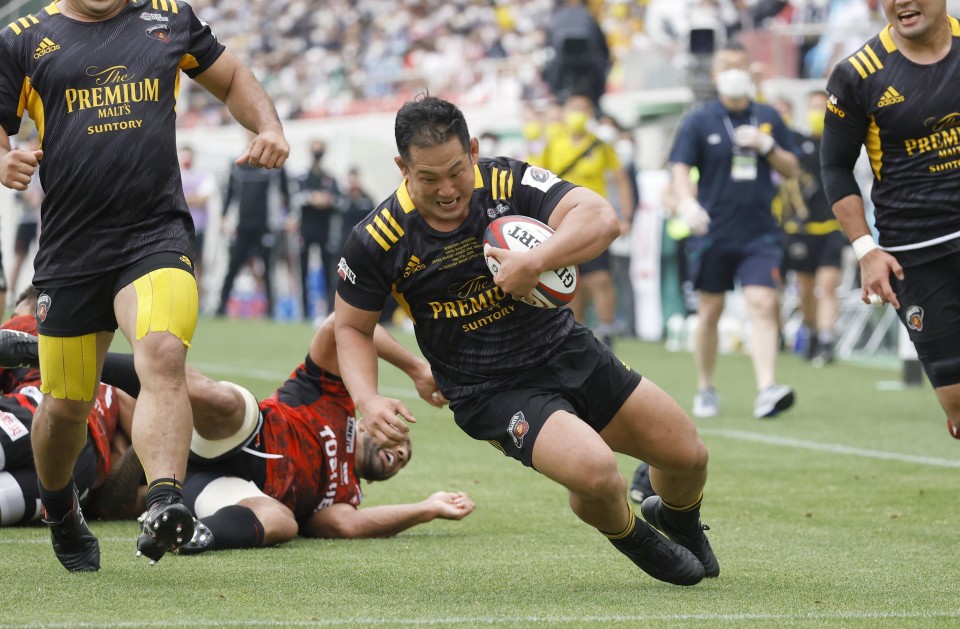 Shintaro Ishihara of Tokyo Sungoliath scores a try during the first half of a Japan Rugby League One playoff tournament semifinal against Brave Lupus Tokyo at Hanazono Rugby Stadium in Higashiosaka, Osaka Prefecture, on May 21, 2022. (Kyodo)

Takahiro Ogawa's converted try off a turnover put Brave Lupus up 17-10 before Sungoliath prop Shintaro Ishihara's five-pointer in the corner led to a 17-all halftime deadlock.

Ogawa darted over for his second try just five minutes after the break, with Nakao adding the extras for a 24-17 lead that Sungoliath quickly whittled to 24-23 thanks to back-to-back McKenzie penalties.

Sungoliath regained the lead when Japan international Nakamura crossed from 10 meters out after a bruising carry toward the goal line by Wallabies World Cup star Samu Kerevi.

In a crucial decision, the television match official ruled Brave Lupus replacement Sione Lavemai was held up in goal late in the game after bulldozing across the line through multiple tacklers.