In a meeting in Ulaanbaatar, Hayashi told Battsetseg that Moscow's invasion of Ukraine violates international law and shakes the foundation of international order also in Asia, and therefore global solidarity is strongly required, according to the Japanese Foreign Ministry. 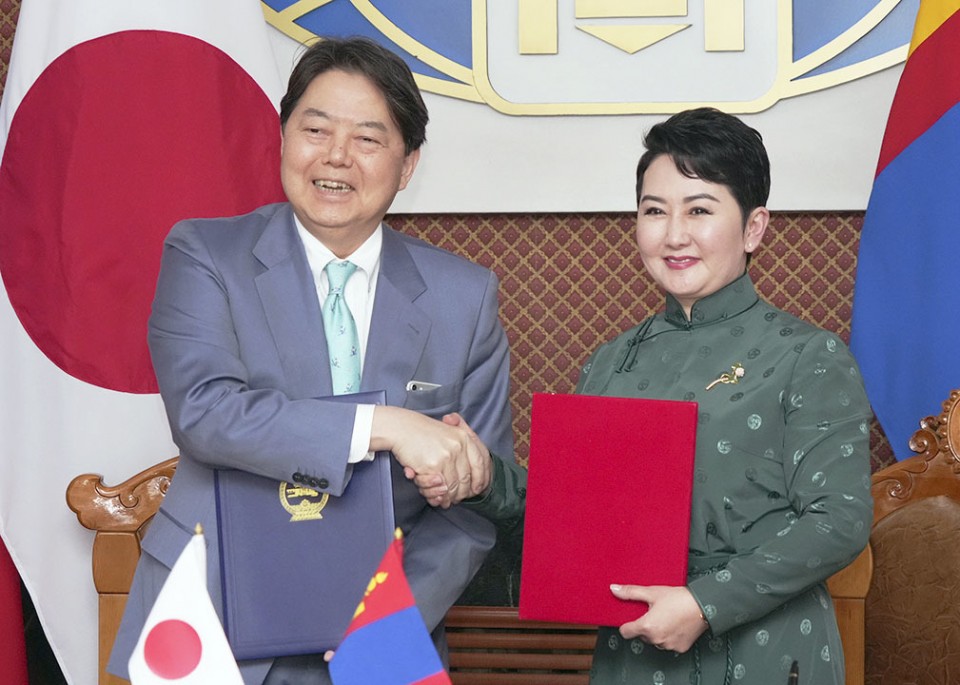 Besides conveying that position, it was not known how she responded to Hayashi's request, except saying it is important to immediately bring about a cease-fire and ease the tense situation in Ukraine, according to a Japanese government official.

Mongolia, a landlocked country in East Asia sandwiched by China and Russia, has long been highly dependent on the two big powers in terms of energy supplies, trade and even electricity especially in the western part, according to the Japanese ministry.

In early March, Mongolia abstained from voting on a U.N. General Assembly resolution condemning Moscow for its invasion of Ukraine, which ended up being adopted with the approval of 141 out of the 193 members of the United Nations.

After their first in-person meeting as foreign ministers, Hayashi and Battsetseg signed an agreement for 260 million yen ($2 million) in Japanese aid to host young Mongolian government officials at graduate schools in Japan.

Given that Mongolia has close ties with North Korea, the ministers agreed to maintain their cooperation in dealing with Pyongyang's missile and nuclear development, as well as the issue of its abductions of Japanese nationals in the 1970s and 1980s.

Later Sunday, Hayashi visited the Shine Mongol Harumafuji School, founded in 2018 with support from Harumafuji, a Mongolian-born former sumo wrestler who rose to the sport's highest rank of yokozuna.

Hayashi is on a five-day trip from last Thursday, during which he also visited Kazakhstan and Uzbekistan.

On Monday, Hayashi will meet with Mongolian President Ukhnaa Khurelsukh before leaving for Japan.