Japan's industry minister showed a negative view Wednesday about keeping pace with the European Union over its plan to ban oil imports from Russia as an additional sanction against Moscow following its invasion of Ukraine.

"Japan has limited resources and it is difficult for us to immediately align ourselves" with the EU, Economy, Trade and Industry Minister Koichi Hagiuda told reporters in Washington after meeting with senior U.S. officials. 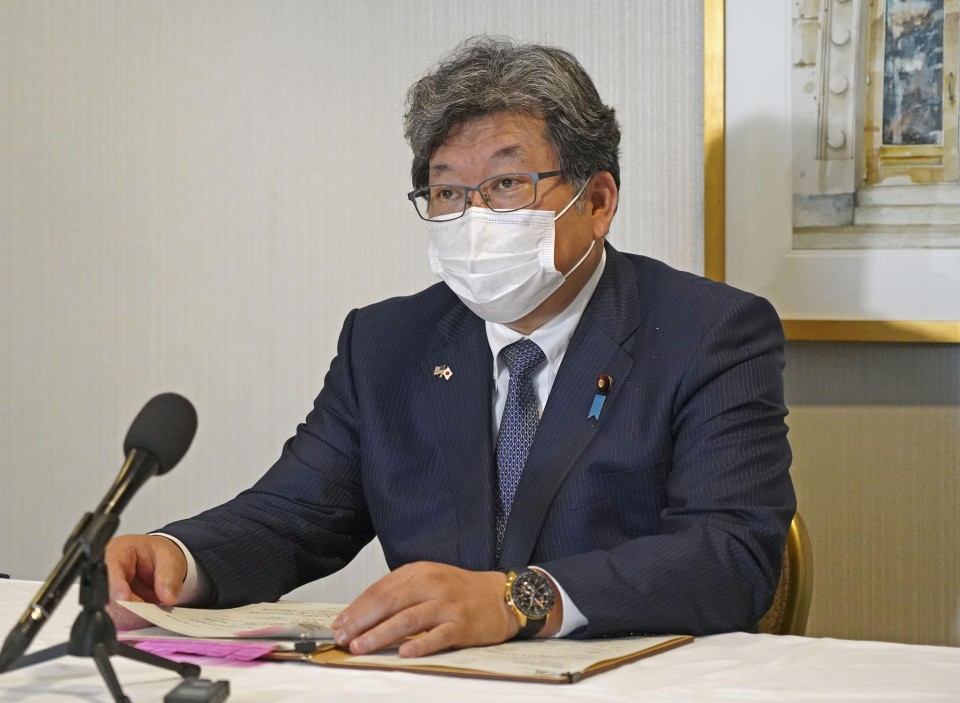 Koichi Hagiuda, Japan's minister of economy, trade and industry, speaks at a press conference in Washington after meeting with U.S. officials, including Secretary of Commerce Gina Raimondo, on May 4, 2022. (Kyodo) ==Kyodo

His remark came after European Commission President Ursula von der Leyen said the regional bloc is proposing to ban all oil imports from Russia by the end of this year.

"It is necessary for countries to do what they can do to keep pace," Hagiuda said, while adding his government wants to "share the same direction" after U.S. President Joe Biden expressed his intention to hold talks among the Group of Seven nations by the end of this week on imposing more sanctions against Russia.

In his meeting with U.S. Energy Secretary Jennifer Granholm earlier Wednesday, the two shared "the importance of maintaining energy security" amid the Russian invasion of Ukraine that started in late February, according to their joint statement.

Hagiuda said he told Granholm that each country has a different energy security situation and each country's stance is important.

To reduce dependence on Russia in the energy field, Japan asked the United States to increase liquefied natural gas output, Hagiuda said, adding that Japan is considering providing loans to Japanese firms which take part in the U.S. LNG projects.

In resource-poor Japan, Russia accounted for 3.6 percent of its crude oil imports and 8.8 percent of LNG imports in 2021, according to Japan External Trade Organization data.

The two also expressed an intention to collaborate in realizing net-zero carbon emissions, as they work jointly to develop cutting-edge clean energy solutions in areas that include offshore wind, geothermal energy, hydrogen and nuclear power.

Hagiuda separately agreed with U.S. Commerce Secretary Gina Raimondo to cooperate in boosting research and development of semiconductors, which are used in many fields including the defense industry, and their supply chains.

Under the basic principles on semiconductor cooperation, the two nations will also collaborate in diversifying semiconductor production capacity, increasing transparency, coordinating emergency response on shortages and promoting workforce development, according to their joint statement.

Hagiuda and Raimondo also agreed to aim for an early launch of the Indo-Pacific Economic Framework, a regional engagement initiative that the Biden administration is promoting amid efforts to push back against China's increasing economic clout.