Cityscape-defining Tokyo Skytree, Japan's tallest structure, on Sunday marked the 10th anniversary of its opening to the general public and becoming a symbol of the country's pre-pandemic tourism boom.

Commemorative events celebrating the opening of the 634-meter structure's Tembo Deck and Tembo Galleria observation areas include an ongoing "JoJo's Bizarre Adventure" anime collaboration and a performance by Kabuki actor Ichikawa Ebizo livestreamed on a screen from the tower's topmost point on the day. 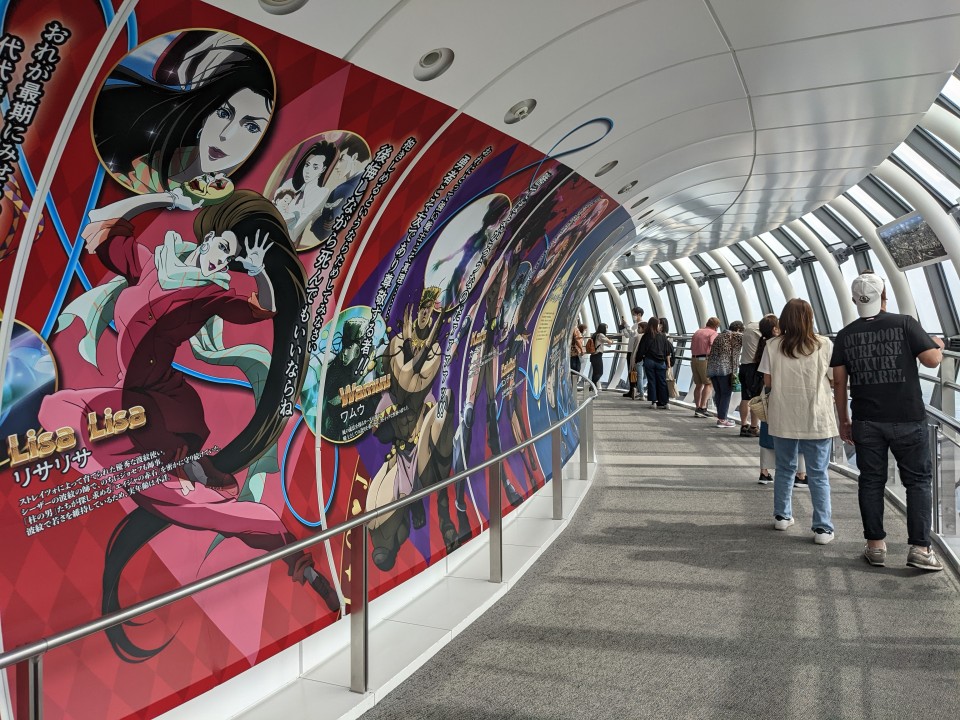 The interior of Tokyo Skytree’s Tembo Galleria deck with panels for the joint 10th anniversary “JoJo Tree” event with popular anime “JoJo’s Bizarre Adventure” is seen in Tokyo on May 19, 2022. (Kyodo) 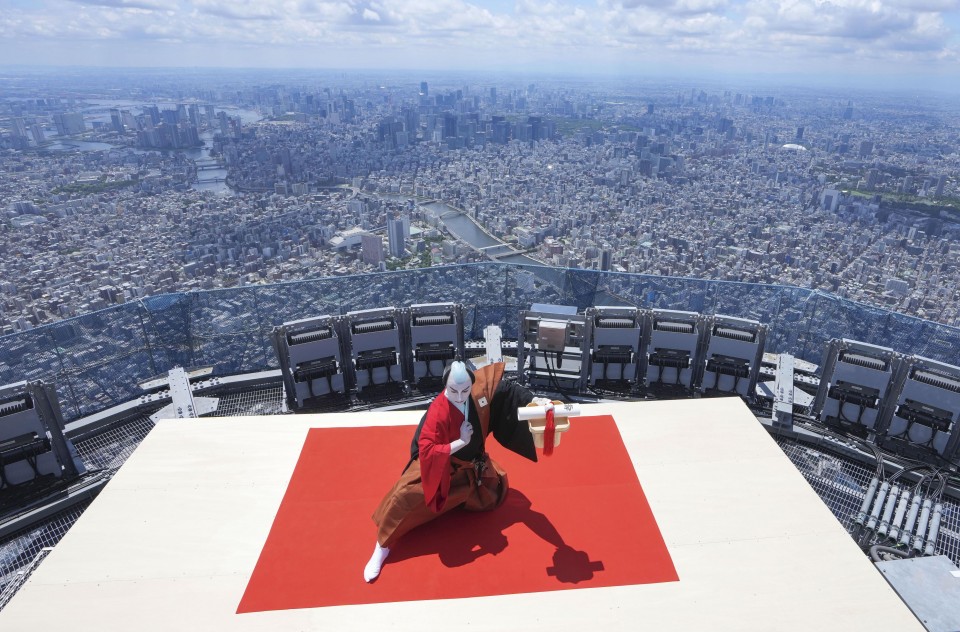 Kabuki actor Ichikawa Ebizo performs at the topmost point of the Tokyo Skytree broadcasting tower on May 22, 2022, during a ceremony marking the 10th anniversary of the tower's opening. (Kyodo) ==Kyodo 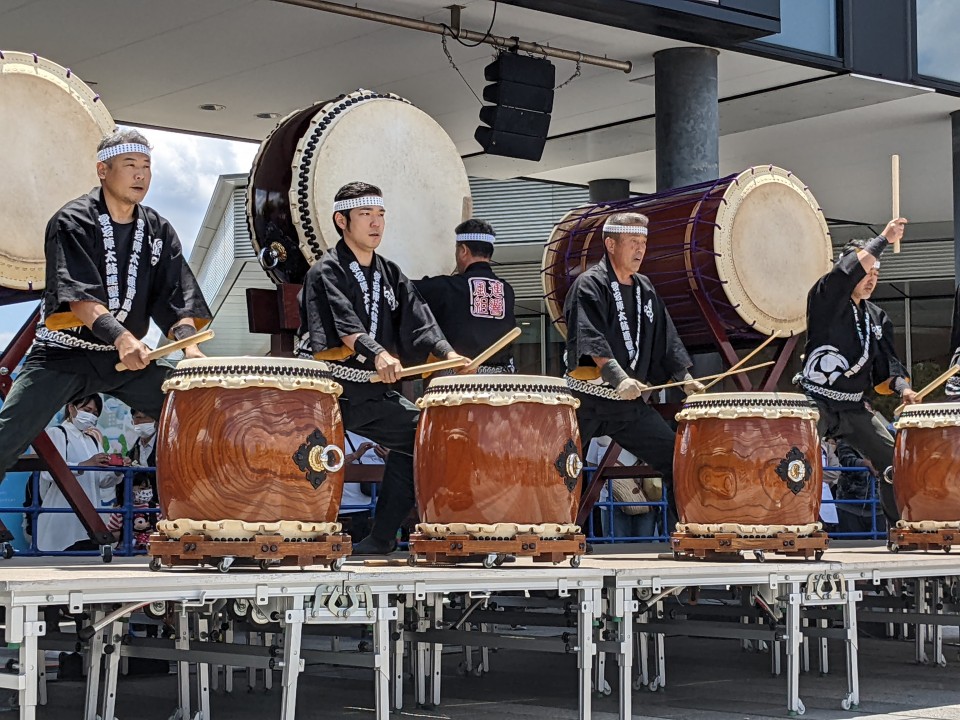 Members of a taiko drum group play at an event to mark the 10th anniversary of Tokyo Skytree's public opening on May 22, 2022. (Kyodo)

Tenth-anniversary leather coasters made by two local workshops were available to the first 634 people in line for tickets, handed out from 9 a.m. at Tokyo Solamachi shopping center's Sky Arena, with eager fans queuing from 6:30 a.m.

Among them was Masaki Yoshida, 40, from Kawaguchi, Saitama Prefecture, near Tokyo, and four other family members. They all received the coasters.

Yoshida, who said they attended previous Skytree anniversary events before the coronavirus pandemic, said the building and its construction remind him of when they were expecting the birth of his eldest son Koki, now 11.

Built on a disused railway shunting yard in the Oshiage neighborhood of east Tokyo's Sumida Ward, Tokyo Skytree doubles as a broadcasting tower and forms part of the Tokyo Skytree Town facility that includes the Tokyo Solamachi shopping center and Sumida Aquarium.

The tower project, led by Tobu Railway Co. at a total cost of around 65 billion yen ($508 million), was devised following major broadcasters' proposals for a structure to ensure digital TV transmissions without interference from the capital's numerous 200-meter plus buildings.

Huge nationwide interest followed Skytree's public opening on May 22, 2012. Admission lotteries in the first week offered odds of 1 in 335 for the 45 slots available at midday on the 22nd, and its millionth customer was welcomed on Aug. 1 that year.

Tokyo Skytree is seen in this file photo taken from a Kyodo News helicopter in October 2018. (Kyodo)

Despite passing the 40-million guest milestone in December 2021, Skytree has been affected by the pandemic.

Its 780,000 admissions in fiscal 2020 were the first annual attendance under a million and well below the around 3.6 million and 4.27 million ascending its elevators in fiscal 2019 and 2018, respectively.

But there are signs of recovery. In fiscal 2021 it welcomed 1.04 million customers and was open for its first Golden Week in three years in early May this year. Inbound tourism's gradual return projected from June onward is expected to improve prospects further.

Tourists from abroad accounted for 28.9 percent of admissions in 2019, according to the operator of Tokyo Skytree.

"The lack of inbound tourists has had an effect, so we really hope they'll visit when restrictions are lifted," said a spokeswoman for Tobu Tower Skytree Co.

Just ahead of the 10th anniversary, the Tembo Deck 350 meters up was busy with tours, couples and others.

A group of first-year Tokyo high school students visiting for the first time said Skytree had become synonymous with the capital and is cooler than older rival Tokyo Tower.

Natsumi Tsukui, a 21-year-old beatboxer from Osaka Prefecture, who came with her mother, praised the "amazing" views of the sprawling buildings below.

But for local businesses and residents just outside the tower and shopping center, its presence has had a mixed effect on the area.

Kiyoshi Tanaka, who for over 50 years has run the local store Ajigin specializing in inarizushi fried-tofu packaged rice and maki seaweed rolls, said the area had become busier and more convenient.

Masataka Omine, who runs the Omineratan workshop specializing in furniture, agreed that it has been "energized and renewed." But he added that the project had reduced the sense of community. "The old shopping streets, they've disappeared."

Time proven to tick faster on Tokyo Skytree than ground