Japanese Prime Minister Fumio Kishida and his EU counterparts agreed Thursday to cooperate in realizing a "free and open" Indo-Pacific as Russia's continued war in Ukraine and an increasingly assertive China have increased uncertainty in the region. 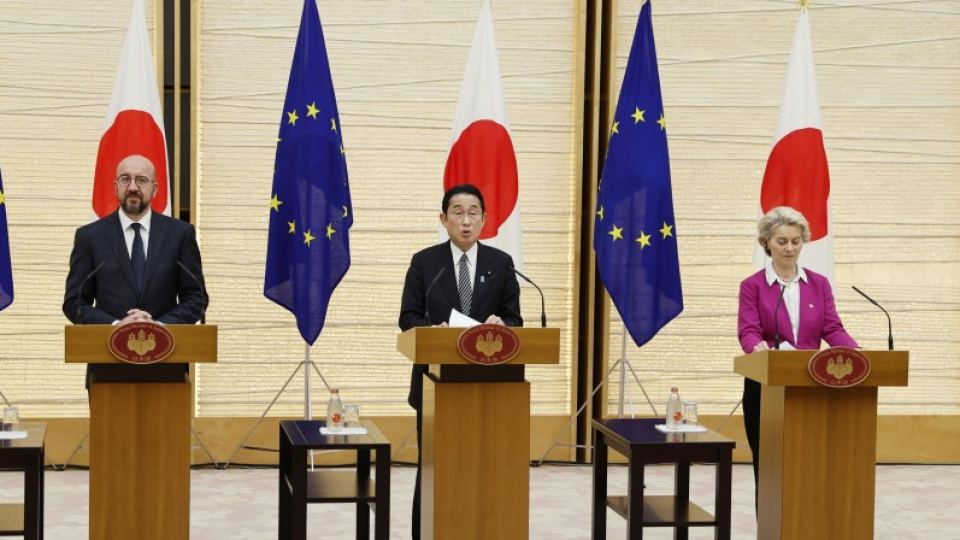 In a joint press appearance, von der Leyen said the 27-member bloc "wants to take a more active role" in the region that is thriving but is also "a theater of tensions," referring to the East and South China seas, where China is increasing its activities, as well as North Korea's threat.

Kishida said Russia's invasion is "absolutely impermissible" as it shakes the "foundation of international order not just covering Europe but also Asia."

Michel said Japan and the European Union have a "deep and dynamic relationship united by the fundamental values of democracy and rule of law," and called for strengthening the partnership.

"Russia's war against Ukraine has shown that deeper cooperation is not a luxury, it's a vital necessity," he added.

Von der Leyen called Russia "the most direct threat to the world order," citing Moscow's "worrying pact" with China and their calls for "new and very much arbitrary international relations."

Already, both Japan and the European Union have strongly condemned Russia for its invasion and its alleged war crimes, and imposed financial and trade sanctions on the Russian government and individuals to isolate Moscow. They also recently unveiled plans to phase out Russian oil imports. 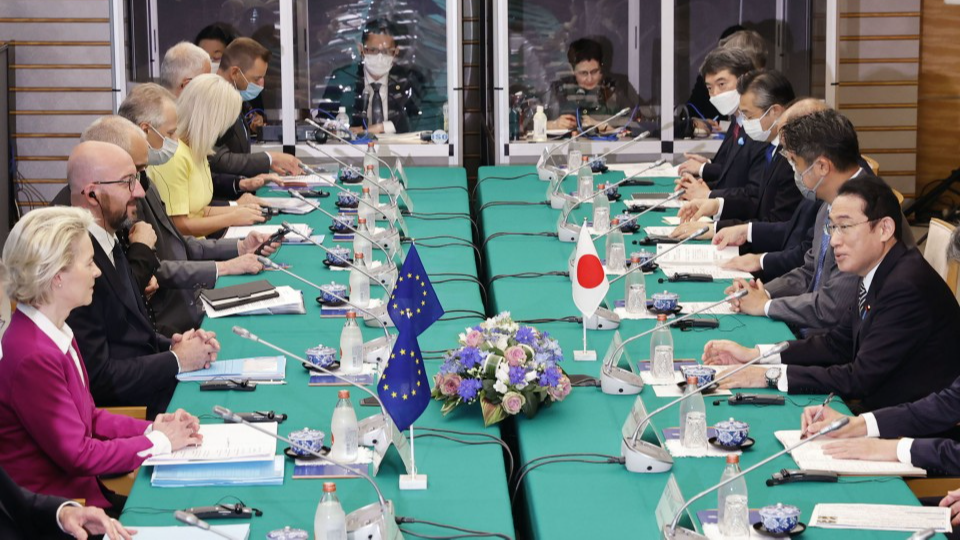 Kishida has also warned of the implications of the Ukrainian crisis for regions beyond Europe and stressed the need to never allow the use of force to alter the status quo, at a time when the rise of an assertive China is heightening regional concerns.

Kishida and the EU leaders also confirmed their cooperation in energy and food security as well as economic security.

In a joint statement released after the meeting, Japan and the European Union said, "We strongly oppose any unilateral attempt to change the status quo by force, regardless of the location, as a serious threat to the entire international order."

The statement also referred to the situation in the East and South China seas as well as the Taiwan Strait, where China has been stepping up its military pressure against the democratic island. 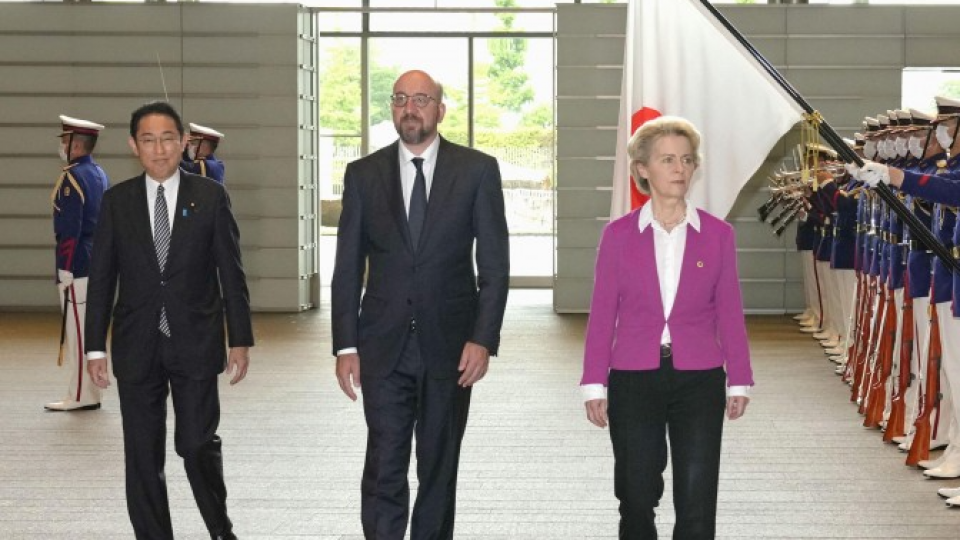 "We remain seriously concerned about the situation in the East China Sea, including in the waters surrounding the Senkaku islands, and South China Sea," it said.

The Senkakus have been a source of friction between Japan and China as China claims the Japan-administered islands and has repeatedly sent vessels near them.

"We underscore the importance of peace and stability across the Taiwan Strait, and encourage the peaceful resolution of cross-Strait issues," the statement also said.

In their latest meeting, the Japanese and EU leaders also agreed on launching a framework of comprehensive cooperation in the digital area, with the two sides recognizing the importance of a free and secure flow of data.

They also affirmed diversifying and strengthening the supply chain of materials such as semiconductors and cooperating on infrastructure.

The European Union has been stepping up its engagement with the Indo-Pacific and aligned with Japan, the United States and other nations in a bid to make the region a free, open and rules-based one. It has identified key areas of cooperation such as security, digital connectivity and climate change.

During Thursday's talks, Kishida also called for removal of EU import restrictions on some food items from parts of Japan imposed in the wake of the 2011 Fukushima nuclear crisis.

Japan and the European Union hold a regular summit at least once a year, and the previous one took place in May 2021 in a virtual format due to the COVID-19 pandemic.