Japanese Prime Minister Fumio Kishida and his Vietnamese counterpart Pham Minh Chinh on Sunday affirmed respect for the sovereignty of states and warned against the use of weapons of mass destruction as the war in Ukraine continues.

Kishida and Chinh, however, did not single out Russia's military aggression in Ukraine in a joint press conference after their meeting in Hanoi, apparently taking into account Vietnam's traditional ties with Russia since the Soviet era. 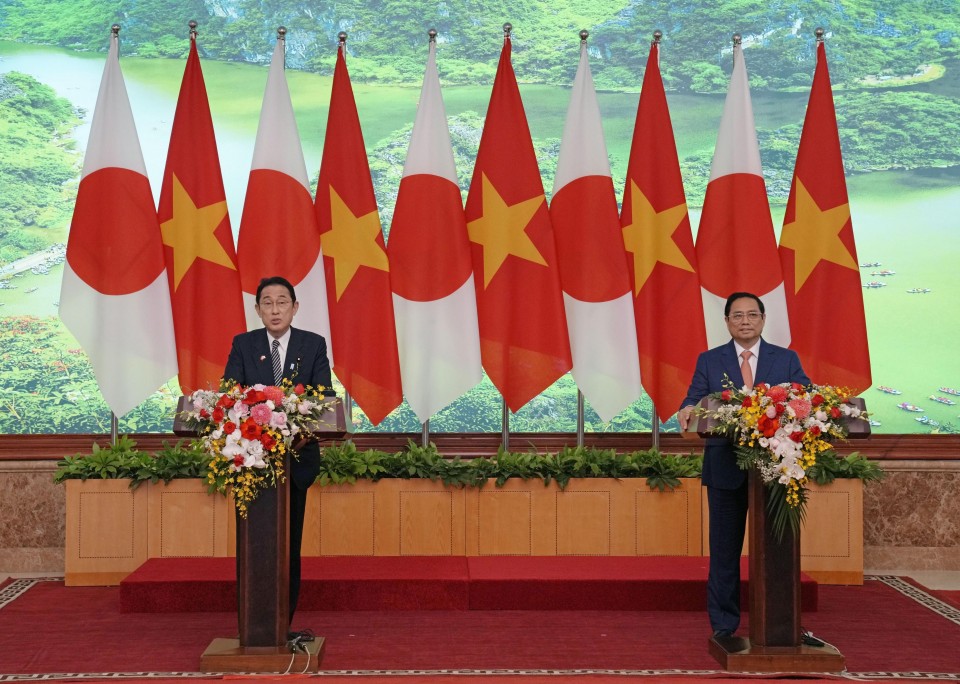 "We confirmed that countries must abide by the principle of respecting the independence and the sovereignty of states," Kishida said. "In any region, changing the status quo by force is intolerable."

The two agreed on the importance of an immediate cease-fire in Ukraine and the provision of humanitarian aid, Kishida said, as he hailed Chinh's pledge to offer $500,000 in humanitarian aid to Ukraine through international organizations.

It marked Vietnam's first offering of humanitarian assistance to Ukraine.

Kishida also said the two leaders affirmed they "strongly oppose threats and uses of weapons of mass destruction and attacks on civilians."

Last week, Russian President Vladimir Putin warned of the possibility of "lightning-fast" retaliatory strikes if a third country intervenes in military operations in Ukraine and poses threats to Russia.

Putin said Russia possesses weapons others do not have and that his country will "use them if needed."

"There are many countries that have not taken the same steps as the Group of Seven nations in relations with Russia," Kishida told reporters, in reference to the seven advanced democracies of Britain, Canada, France, Germany, Italy, Japan and the United States.

"It is important to gain their (countries other than the G-7) understanding and cooperation as much as possible," Kishida said. "I appreciate Vietnam announcing humanitarian aid to Ukraine for the first time as a positive first step."

In the run-up to the meeting, the focus was on whether Japan and Vietnam could agree to work together over Russia's invasion of Ukraine.

Tokyo is stepping up sanctions on Moscow in coordination with other G-7 nations, but Hanoi abstained in a U.N. vote in March on a resolution condemning Russia's attack on its neighbor.

With Japan taking a tough line on Russia with other G-7 countries, Kishida is seeking to push forward collaboration with the members of the Association of Southeast Asian Nations, most of which -- including Vietnam -- have so far stood aloof from actions against Moscow.

Speaking at the press conference, Chinh said the two sides discussed global issues including the situations in Ukraine and in the South China Sea.

"We are committed to strengthening ties for maintaining peace and stability in the region," he said.

Kishida also said the two agreed to strongly oppose attempts to change the status quo in the South China Sea at a time when the region faces an increasingly assertive China.

He called Vietnam an "important partner" in realizing Japan's vision of a free and open Indo-Pacific.

They also decided to set up a website for Vietnamese people seeking to train in Japan under the country's technical internship program and allow them to directly access information on job offers and the sending organizations.

The program for transferring skills to developing countries has come under international scrutiny for issues including brokers charging excessive fees to those applying for the program.

Before heading off on his eight-day tour covering Southeast Asia and Europe starting Friday, Kishida said the trip is aimed at building peace.

Kishida was in Hanoi on the second leg of his five-nation trip that will also take him to Thailand, Italy and Britain. He arrived in the Vietnamese capital from Indonesia on Saturday.