A growing list of Japanese companies have opened the door for employees to work four days a week, instead of five, offering them more flexibility so they can improve their work-life balance to meet responsibilities at home or acquire new skills outside of their workplace.

While companies can benefit from introducing the compressed work schedule as it can help attract more talent or prevent employees from leaving, it remains to be seen whether the relatively new workstyle will gain traction in Japan.

Panasonic Holdings Corp. became the latest company to embrace the four-day workweek, with the industrial conglomerate saying last month it will give some of its employees the option of taking a third day off during the current fiscal year through March. 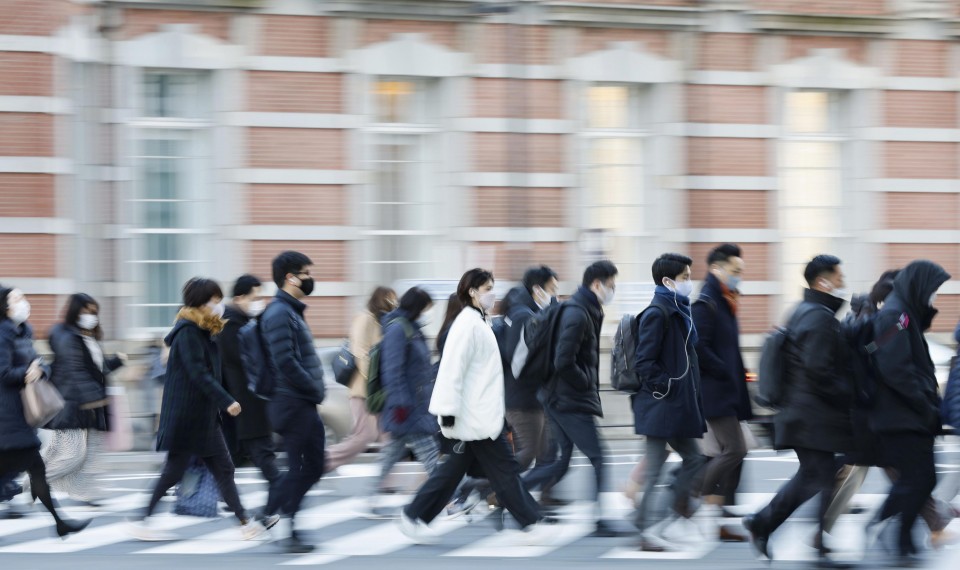 Commuters wearing face masks walk in front of JR Tokyo Station on their way to work on Jan. 18, 2022. (Kyodo)

Panasonic's announcement came after the Japanese government stated in its annual economic policy guideline last year that it encourages firms to offer an optional four-day workweek, as it can benefit workers for various purposes, such as child rearing, taking care of elderly family members and volunteering.

Panasonic, which will introduce the scheme on an experimental basis, joins other firms, including conglomerate Hitachi Ltd., Mizuho Financial Group Inc. and Fast Retailing Co., the operator of the Uniqlo clothing chain, to accept the four-day workweek.

"It is our responsibility to ensure a work-life balance to our diverse workers," Panasonic President Yuki Kusumi told a press conference in January.

Hiromi Murata, a senior researcher at Recruit Works Institute, said, "Companies see the four-day workweek as a way to hold onto skilled employees as it takes time to hire someone new and raise them to the same level."

"There are many skilled workers, including mothers with small children, who cannot work five days a week. So firms can improve their chances of hiring someone with good qualifications if they implement the four-day workweek," she added.

As of last year, 8.5 percent of companies were giving employees more days off than under a five-day workweek, according to a survey conducted on over 4,000 companies by the labor ministry.

Among companies that have accepted the optional four-day workweek, pharmaceutical firm Shionogi & Co. began allowing workers to take a third day off in April in the hope that they will acquire new skills or develop a network of contacts through additional education or working a second job.

As the Osaka-based drugmaker aims to expand its business to health care services using digital platforms, it saw the four-day workweek as an opportunity for employees to obtain knowhow in the digital field, the company's public relations official said.

"We want workers to meet new people and experience things that they cannot at this company, and thus make use of them in their jobs here," the official said.

Shionogi, which has applied to the health ministry for approval for its COVID-19 drug, will give employees on a four-day workweek about 80 percent of their regular salary. But the firm allows workers to take a second job.

Meanwhile, Hitachi said in April it will allow employees to organize their work schedule flexibly, allowing them to take a four-day workweek, as long as they meet the necessary work hours per month.

In the new labor system to be introduced at a later time, Hitachi employees will receive the same level of salary even if they take a third day off.

Panasonic said last month it will decide on the specifics about the salary of workers on a four-day workweek before its launch.

"Companies that have so far accepted the system in Japan have done so in a way that won't cause a burden" on their finance, said Takuya Hoshino, a senior economist at the Dai-ichi Life Research Institute.

"The importance of meeting employees' hopes to work flexibly has increased as Japan's working population is expected to shrink in the future" due to the country's aging population, he said.

However, there are still doubts whether the new workstyle will gain popularity in Japan, where many companies only began offering two days off per week in the late 1980s.

A survey by job information provider Mynavi Corp. released in February found that 78.5 percent of workers between in their 20s and 50s said they did not want to take three days off if their pay was cut.

Furthermore, 60.1 percent of the 800 respondents said it was impossible to introduce a four-day week at their workplace. Their reasons varied from being understaffed or the workload being too great.

While Murata of Recruit Works Institute said the disadvantages of the four-day workweek include the difficulty of managing work shifts and the lack of communication among workers, she said that large firms that will embrace the work schedule could set an example.

"Whether the four-day workweek brings benefits varies depending on the industry or type of jobs that workers have. Japanese companies could implement the idea on a trial basis and see whether it works for them," Murata said.

"More firms may follow if they learn the benefits from those that have already utilized it," she said.