On the face of it, consumer inflation in Japan finally hit 2 percent, an elusive goal set by the Bank of Japan. Households know firsthand prices are actually rising, a situation that may have been unimaginable years ago.

But the BOJ is unconvinced -- and unsatisfied -- because the latest bout of inflation, driven by higher energy and commodity prices largely blamed on the war in Ukraine, is not something policymakers had hoped for. The daunting task awaits the BOJ of making inflation sustainable and acceptable to a public long rooted in deflationary mindsets.

That, along with Japan's slow economic recovery from the COVID-19 fallout, boosts the likelihood of no near-term change to the BOJ's ultra-low rate policy.

The BOJ expects commodity inflation will only be temporary but economists say core consumer inflation will stay above 2 percent for the rest of the year, risking a sharp deterioration in household sentiment.

The problem with the latest inflation is that the price of fuel and the cost of food products, which are essential for everyday life, are rising quicker than other items.

A potential savior is what the BOJ and economists call "forced savings," or trillions of yen that likely have accumulated due to restrictions imposed by COVID-19, because the money could serve as a buffer in the short-term. For the longer-term, more robust wage growth is a must, economists say.

Japan's core consumer price index excluding volatile fresh food items jumped 2.1 percent in April from a year earlier, government data showed Friday. The gauge of inflation accelerated from 0.8 percent in March amid higher commodity prices and as the fading of the year-on-year effect of cheaper mobile data plans started to kick in.

Except for a one-year period between 2014 and 2015 in which the core CPI was above 2 percent due to a consumption tax hike from 5 to 8 percent, it was the first time that the figure topped 2 percent since Governor Haruhiko Kuroda took the helm of the central bank and launched powerful monetary easing in 2013. 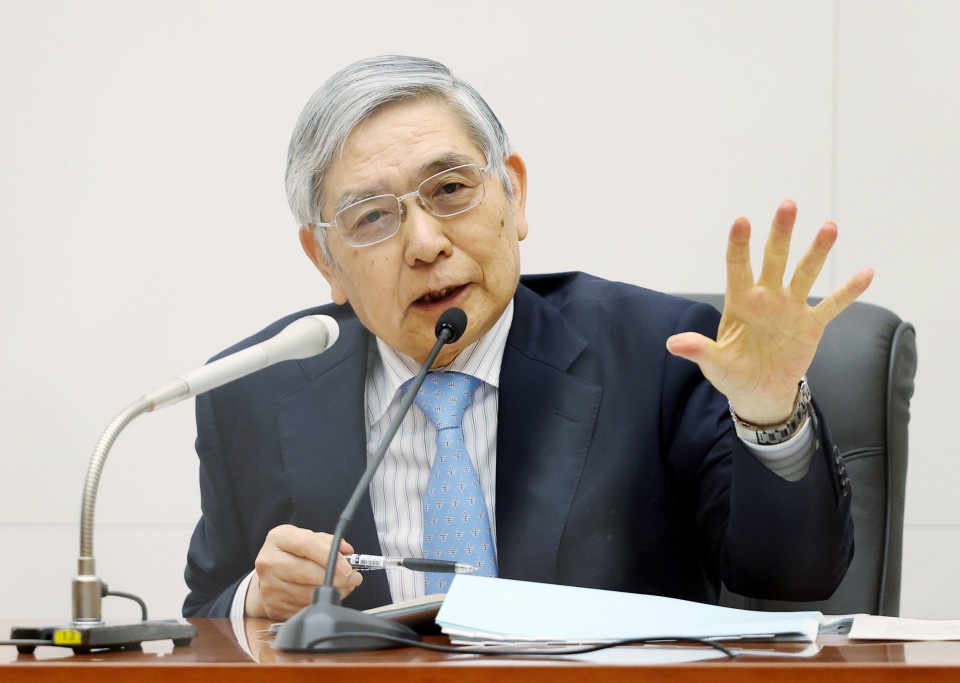 The BOJ Policy Board admits that Japan will see inflation stay around 2 percent in the coming months, though the rise in core CPI will slow to 1.1 percent in the year from next April when Kuroda's current term as BOJ chief ends.

"Japan's economy has been recovering but faces downward pressure from higher commodity prices. Under such circumstances, there is nothing more important than to firmly support economic activity with powerful monetary easing," Kuroda told a parliamentary session before the release of the latest inflation data.

"Wages should increase more so households can tolerate more price hikes and the inflationary trend can become more sustainable," the governor said.

Japan is in a critical phase, economists say, as there is a question mark as to whether consumers can withstand much higher prices that would squeeze their budgets.

Naoko Ogata, a senior economist at the Japan Research Institute, said it is "inevitable" that the prospect of accelerating inflation will cool sentiment. But so-called forced savings worth around 20 trillion yen ($156 billion) and government subsidies to cushion the negative impact of higher energy costs would offer some help.

"Provided that a working family of two or more people has around 500,000 yen in forced savings, they can absorb an estimated blow of less than 100,000 yen a year from the recent inflation," Ogata said.

"The chances are that Japan will neither return to the days of deflation nor experience a shift toward 'good' inflation supported by robust wage growth," she added.

Even though the BOJ maintains that commodity-led inflation will not last, Deputy Governor Masayoshi Amamiya said recently that households and Japan Inc. could change the way they view prices.

In a Cabinet Office survey for April, nearly 94 percent of respondents, or households with more than two people, said prices will increase in a year from now. More than half of that group expect prices to rise by 5 percent and more.

Economists at SMBC Nikko Securities Inc. forecast the core CPI to rise 2.2 percent in the fiscal year to next March and 0.7 percent the following year.

Inflation could become a hot-button issue in the run-up to the House of Councillors election in July as consumers may feel prices are rising much faster than what the CPI figure suggests.

Prime Minister Fumio Kishida, who places great importance on the distribution of wealth, is calling for more aggressive wage hikes by companies that have recovered from the COVID-19 fallout.

Labor unions have won an average 2.1 percent increase in wages from a year earlier during this year's spring negotiations with management, according to a tally as of May by Rengo, Japan's umbrella organization for labor unions. It is the first increase of over 2 percent in three years, but wage growth is slower among smaller firms.

The absence of strong wage growth makes Japan different from the United States where inflation has reached around 8 percent and the Federal Reserve is scrambling to tame it by raising interest rates.

"The BOJ has no choice but to stick with its current monetary policy because it has seen no success in attaining the inflation target in a way that it wants to see," said Suehiro, an economist at Daiwa Securities, adding that the basic price trend has not changed without the effect of higher commodity prices.

"The time may come (for the BOJ) to reflect on roughly ten years of monetary policy as Mr. Kuroda's term is approaching its end."