Seven people from the United States arrived in Japan Tuesday as part of the first small-scale test tours in the government's planned gradual reopening to inbound tourists from June.

The seven -- six from Hawaii and another from Los Angeles -- landed at Narita airport outside Tokyo and will participate in tours employing coronavirus countermeasures. 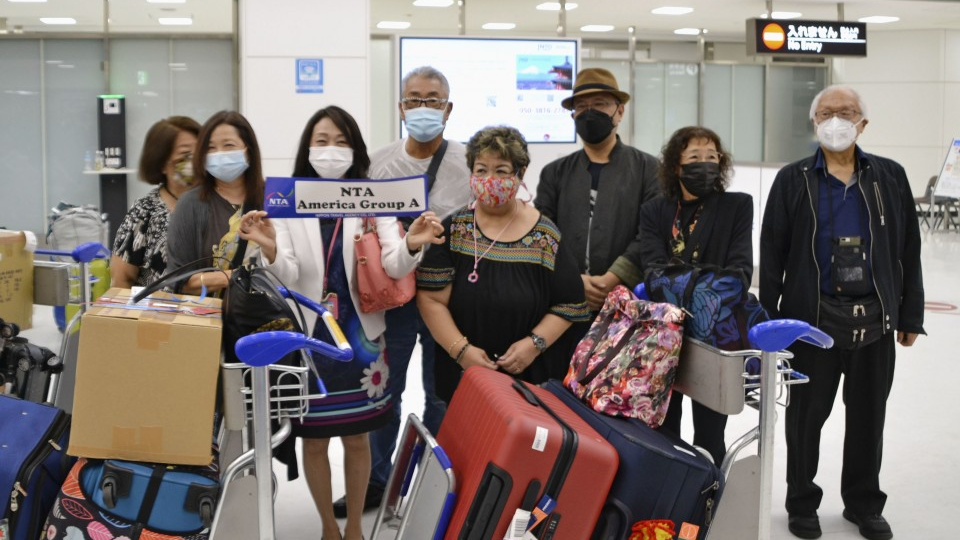 People from the United States taking part in the first small-scale test tours in Japan ahead of a possible reopening to tourists are seen in Narita airport near Tokyo on May 24, 2022. (Kyodo)

The seven will be split into two itineraries. One includes Tochigi Prefecture's Nikko Toshogu shrine and Zenkoji temple in Nagano Prefecture, while the other features Iwate Prefecture's Hanamakionsen hot spring resort and the Mogami River in Yamagata Prefecture.

People from the United States, Australia, Thailand and Singapore are eligible for the test tours, which involve about 50 individuals, including travel agency officials, split across 15 groups sightseeing in 12 prefectures.

As part of infection prevention measures, groups will comprise no more than four people, with participants asked to wear masks when visiting tourist spots or using transportation.

A correspondence system will also be set up for cases where someone tests positive mid-tour.

The number of foreign visitors to Japan totaled 31.88 million in 2019, hitting the highest level on record. Conversely, pandemic border controls made 2021 the lowest since comparable data were made available in 1964, with just 245,900 foreign nationals entering the country.

Despite plans for some restrictions to be eased, including doubling the maximum daily limit on eligible overseas arrivals to 20,000 from June, no date for lifting tourist entry restrictions has been indicated.

Takahide Kiuchi, executive economist at the Nomura Research Institute, estimates that if the government does apply the 20,000-person cap, then the economic effect from foreign students, people staying long term and tourists would add 8.13 trillion yen ($63.8 billion) to the economy a year.

Amid a worldwide trend to accept vaccinated tourists without quarantine measures, Japan takes differing measures depending on where people have come from.

From June, travelers to Japan from countries and regions with a low risk of transmission will no longer be required to have quarantine checks or self-isolate at home, regardless of whether they have had three COVID-19 vaccines.

In December 2020, Japan temporarily suspended all new arrivals by foreign nationals to prevent the spread of infections. Following a brief relaxation of the measures, in November 2021, entries were suspended again in response to the Omicron variant's sudden emergence.

Relaxations have since included raising the daily arrivals cap and shortening or excluding people from quarantine requirements based on certain factors, including vaccination status.