Former Japanese residents on the Russian-controlled, Japan-claimed islands off Hokkaido may be required to obtain visas in future travel to the islets when they visit their families' graves there, a senior official at Russia's foreign ministry has said.

The possible change in the existing program, which allows them to travel to the islands without visas for that purpose, comes as tensions mount between the two countries over Russia's invasion of Ukraine. 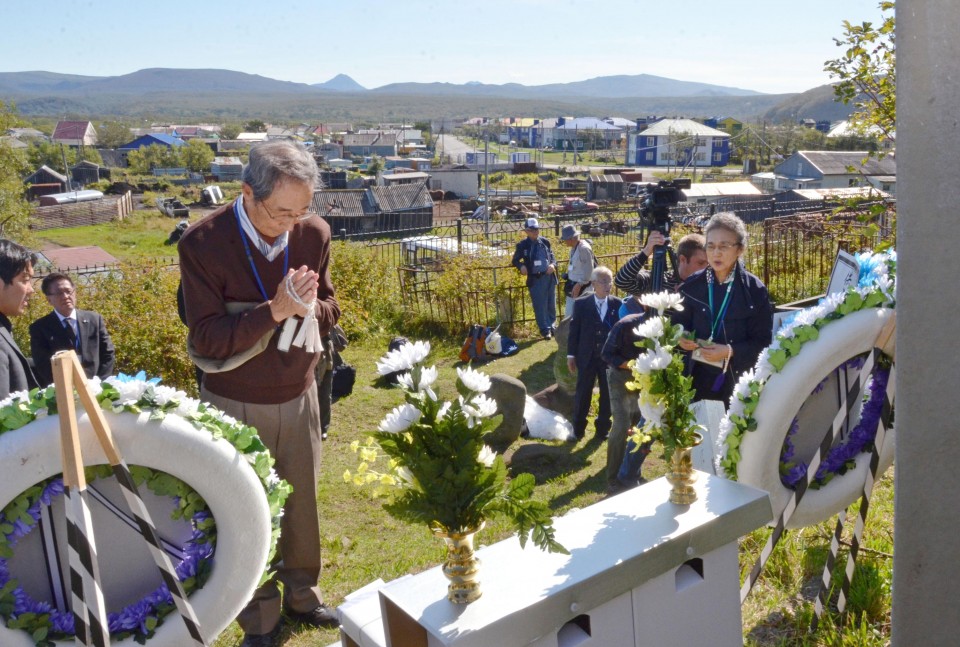 A Japanese former resident of Etorofu Island, one of a group of Russian-controlled islands off Hokkaido, prays in front of an altar on the island on Sept. 23, 2017. (Kyodo)

"No special treatment or simplified procedures will be applied" in such a case, Nikolay Nozdrev, director in charge of Japan and other Asian countries at the ministry, said in a recent written interview with Kyodo News.

The Japanese government is unlikely to accept such a change as it means admitting Russia's sovereignty over the islets.

The visa-free visits have long been allowed through a special arrangement between the two countries although they were canceled the past two years due to the coronavirus pandemic.

Russia said in March it will suspend negotiations, including on the territorial dispute, for a postwar peace treaty with Japan after Tokyo joined the United States and Europe in condemning the invasion of Ukraine.

Moscow also said it was halting a visa-free program that allows former Japanese residents to periodically visit the islands, while still maintaining a scheme for them to visit their ancestral tombs without visas.

Nozdrev said such favorable treatment will no longer be effective after the spread of the virus subsides and travel between the two countries becomes normalized. But he added that former residents are still allowed to visit their families' graves on the islands from a humanitarian viewpoint.

On peace treaty talks, Nozdrev emphasized that Russia has not only pursued conclusion of a treaty itself but also tried to build a peaceful and friendly relationship with Japan.

But he added that Russia cannot engage in negotiations with a country that "overtly poses a threat to our country."

The islands are called the Northern Territories by Japan and the Southern Kurils by Russia.