With Florida's citrus farmers facing some of their toughest ever times due to the combined effect of a spreading tree blight and the fallout from the coronavirus pandemic, innovation appears to be the key to sustain exports to Japan, one of their key markets.

A long-standing global epidemic that kills fruit trees compounded by pandemic-triggered inflation has created multiple problems for farmers in one of the world's leading citrus-growing regions. This year, shipments could be the worst since 1970. 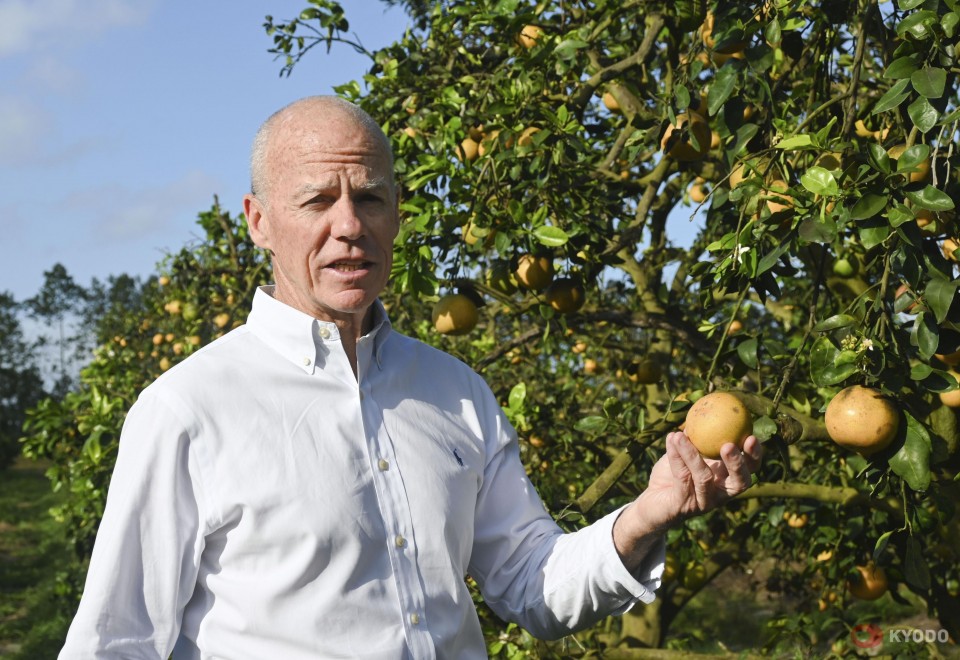 Dan Richey, a 63-year-old third-generation farmer, has been exporting to Japan, Florida's largest market for grapefruit, from a large citrus farm in Vero Beach for over four decades. He says he is determined to continue doing so.

His wife's grandfather, John Knight, started farming in the early 1900s. Knight served on the first Florida Citrus Commission in 1937. The farm's first exports of grapefruit to Japan began in the mid-1970s as the trade became liberalized and quickly took off.

But according to Richey, trouble arrived in Florida via a Chinese cargo vessel almost 20 years ago. Florida's orange trees were infected by "citrus greening disease," which had been spreading worldwide. Once infected, branches become deformed, and the fruit falls off. Before long, the trees wither and die. 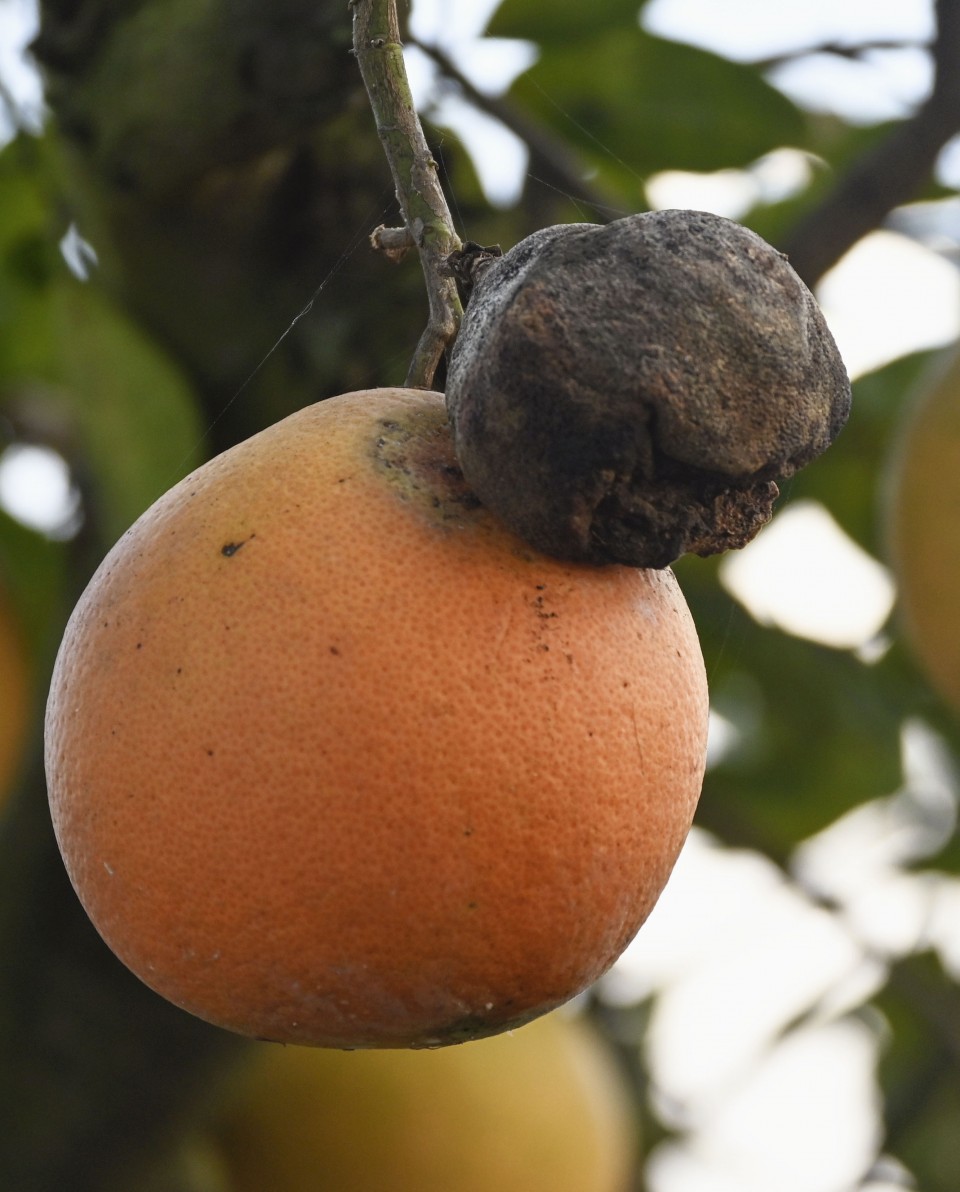 Photo taken on Feb. 17, 2022, shows a grapefruit blackened by "citrus greening disease" on a farm in Vero Beach, Florida. (Kyodo)

Even now, there is no established cure for the disease, although it has spread to Asia, Africa, and other regions. Trees must simply be cut down.

Farmers suffering from a lack of successors have gone out of business, while fertile land where birds and crocodiles gather has been abandoned as farmland or given over to sites for setting up solar panels. But farmers with the wherewithal like Richey have bought up plots and planted new trees.

On a sun-drenched evening in February at the farm located about a 90-minute drive from Orlando, Richey picks a blackened grapefruit from a tree and cuts it in half. One side of the fruit is extremely small and tastes sour. "This is not good to sell," he says. The contrast is evident after taking a mouthful of a ripened fruit bursting with sweetness from a nearby tree.

However, in the previous 2020-2021 season, shipments dropped to less than 7,000 tons, and now the double blow of soaring labor and fuel costs amid the pandemic is compounding the problem.

The spread of the coronavirus has also resulted in logistics problems that have doubled the time it normally takes for shipments to arrive in Japan from one month to two. Shipping costs have increased fivefold, leaving the company prepared to suffer a loss.

But even with the new challenges, Richey's farm and other enterprises are seeking ways to revive Florida's citrus industry.

He has launched a pilot project with Coca-Cola Co. to protect young trees from disease in cooperation with Takasago International Corp. in Tokyo, which uses essential oil extracted from citrus fruits as a raw material for fragrances. 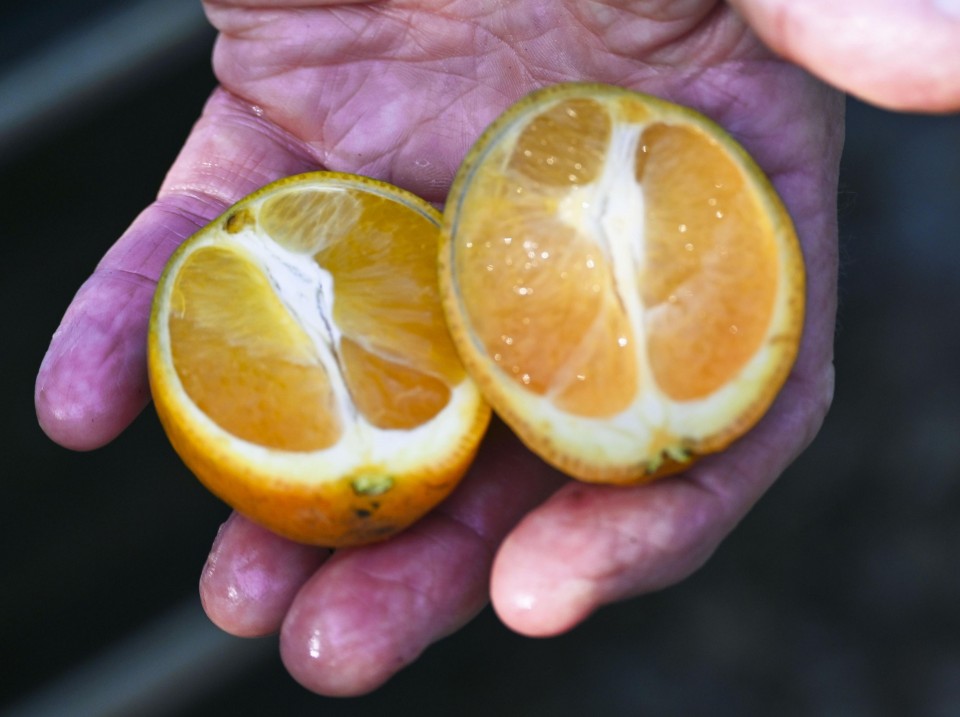 Photo taken on Feb. 17, 2022, shows a grapefruit on a farm in Vero Beach, Florida, whose shape has been distorted by "citrus greening disease." (Kyodo)

They apply red ink to the leaves of tree saplings to prevent insects that carry the disease from approaching. Richey says they are aiming to create a system that produces fruit using sustainable farming methods with techniques such as covering the ground with tarpaulin sheets that reduce evaporation and conserve water.

An official from Takasago International said, "We would like to support this project from a long-term perspective of nearly 20 years, as the fruit is the key to producing flavors and fragrances."

Richey, who has made at least 40 trips to Japan to visit supermarkets that stock his fruit and to research the farming methods of "mikan" tangerine farmers in Kyushu, says he regrets not being able to travel there over the past two years because of the pandemic.

Still, he is undeterred and determined to revive the Florida citrus export industry. "For Japanese consumers, I promise that we'll never give up and will produce excellent fruit." 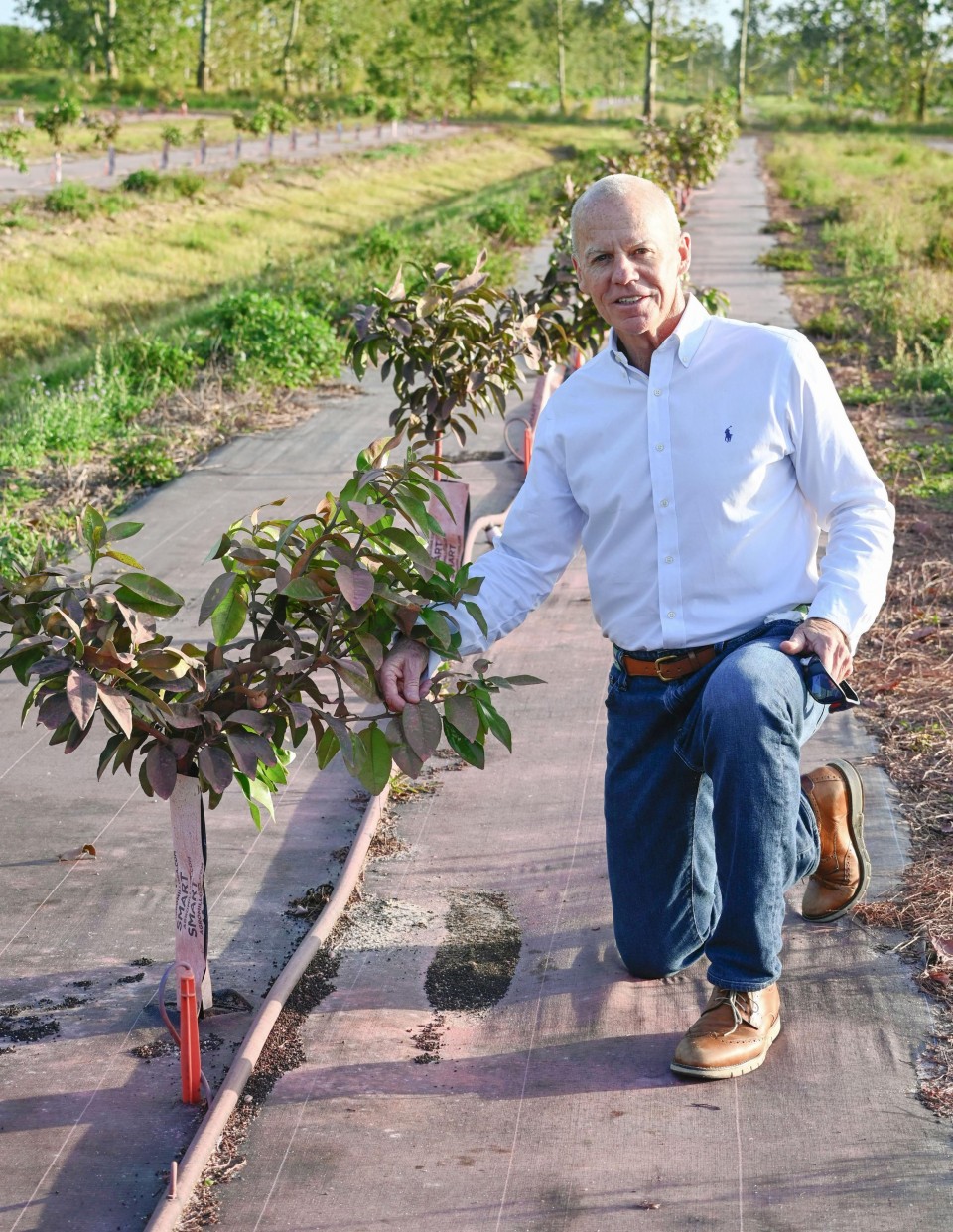 Photo taken on Feb. 17, 2022, shows Florida citrus farmer Dan Richey with a grapefruit tree sapling. Red ink has been applied to the leaves and the ground covered with a tarpaulin. (Kyodo)