A Japanese documentary film that follows a couple lovingly looking after their severely disabled daughter who was declared "near" to being brain dead at birth poses important questions to audiences about how they understand life and the meaning of existence.

The parents of Honoka Nishimura, now 14, were told by doctors that she would never exhibit consciousness when she was born in 2007. But, although she would require medical attention around the clock, the couple brought her back to their home in the city of Saitama, north of Tokyo, when she was 9 months old.

The 72-minute film called "Honoka" shows her from age 3 and her parents over three years. Like any parents, they shower her with affection, taking her on outings and reading picture books in her presence, while her mother, Risa, 45, also takes charge of her medical care. 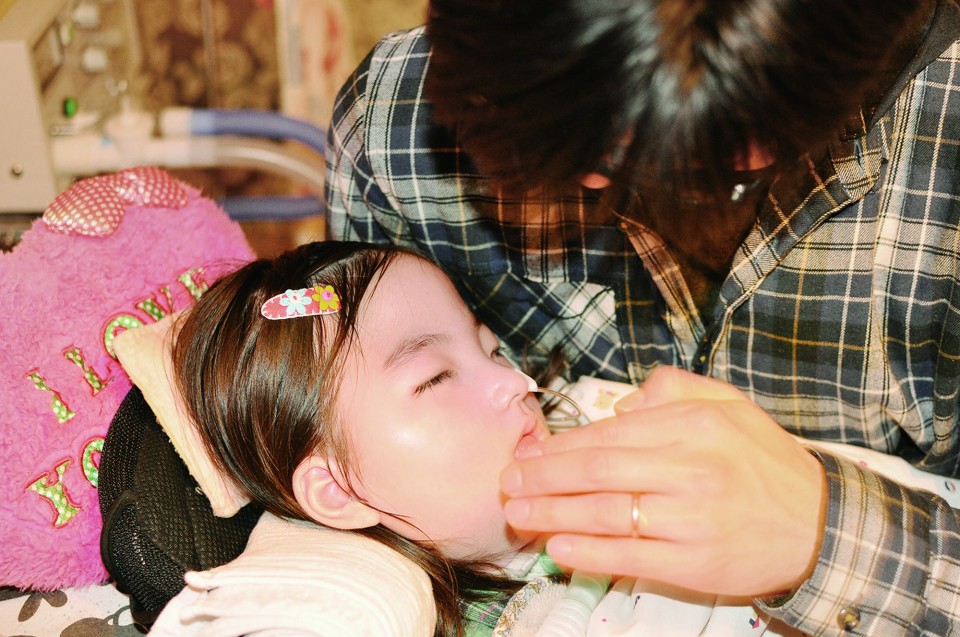 Under a 2010 law that allowed organ transplants upon recognition of brain death from children under 15, a brain death diagnosis is made if a series of criteria are met: an individual is in a coma so deep that they do not feel pain; their brainstem reflexes have disappeared, such as not coughing when the throat is stimulated; their brain waves are flat; and they are unable to breathe on their own.

But Honoka was never officially diagnosed as brain dead, having been born before the law took effect.

The director, Yugo Kunitomo, said he began to think about the issue of brain death before he started filming the family, at a time when debate was raging in Japan over the revised law.

"Although brain death is often associated with death, the body of a brain-dead person is warm and their nails and hair grow. I was asking myself whether such a state can really be defined as being dead," Kunitomo, 38, said in an interview.

What also motivated him was footage of his mother, now deceased, who used to teach at a school for disabled children. One of her students appeared to be in a similar condition to Honoka.

"When I saw the footage, I was shocked that he was actually living in such a state, but my mother was treating him with affection," Kunitomo said, adding that he had even wondered for one moment whether there was a point to the child being alive.

"When such a thought occurred to me, though, I felt disgusted with myself," he said. "I wanted to know what my mother thought about disability and life."

In the film, Honoka's father, Hidekatsu, 45, confesses his bewilderment when learning about his daughter's condition. Risa told the director that she wanted to confirm to herself through the camera lens that what she was doing every day really mattered.

Risa's hands appear rough due to the medical care she provides daily to Honoka with the assistance of helpers, including inspecting her respirator, feeding her through a tube, massaging her to help her urinate, removing phlegm, and frequently changing her position to prevent bedsores.

But much of the film is filled with the family's joy in raising their daughter, featuring a trip to a zoo and birthday celebrations. The parents often speak to her and ask her what clothing she wants to wear. 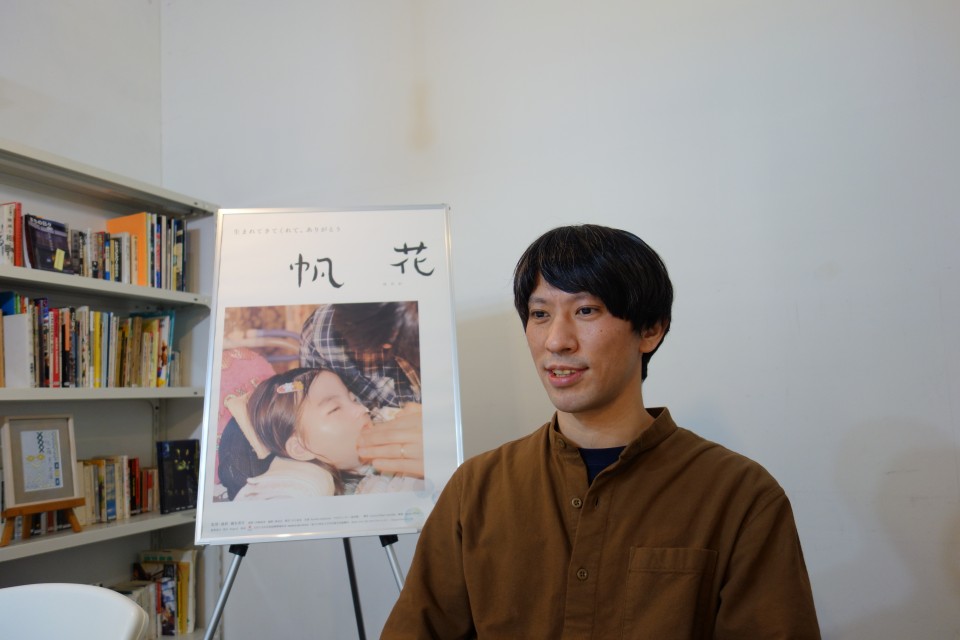 Yugo Kunitomo, the director of documentary film "Honoka" speaks during an interview with Kyodo News on March 9, 2022, in Tokyo.(Kyodo)

The film presents Risa as "communicating" with Honoka, interpreting nonverbal messages from the expressions and sounds her daughter emits through the respirator. One scene shows Honoka wearing toy cat ears equipped with sensors that are supposed to move when they detect brain waves. In the scene, the ears move.

"I have felt Honoka's temperature, her life, and her power to be alive," Kunitomo said. "Through creating this film, I discovered the great existence of life, seeing that Honoka is certainly alive at such a particular time and age."

After finishing filming the family in 2014, it took seven years for the production team to edit the movie, which omits narration and captures the family's daily life unobtrusively. The director's aim was to try to let audiences connect with the family through him and his experiences of being around Honoka.

Before the film's release in January this year, Risa was concerned about how audiences would perceive the family. They had already been subjected to criticism, such as accusations that the parents are "keeping Honoka alive only to satisfy their ego," for instance, Kunitomo said.

Her anxiety only grew after a 2016 mass murder at a care home for the mentally disabled in Kanagawa Prefecture, south of Tokyo, and the way she believed Japanese society "seemed to distance itself from the incident," according to Kunitomo.

But after seeing some of the positive reactions from audience members via social media and other news sources, Risa told Kunitomo her family felt more accepted, allowing her to rebuild trust in society.

The film distributor is considering showing the movie online after screenings at theaters in other parts of Japan, including Niigata and Saitama prefectures.

A teacher visits Honoka, now a junior high student at a special needs school, at home three days a week. The activities include showing her video footage.

According to Kunitomo, Honoka appears to show a reaction to footage concerning environmental issues. When such images are shown, the alarm of her saturation monitor, a device used to measure oxygen saturation in the blood, often sounds. 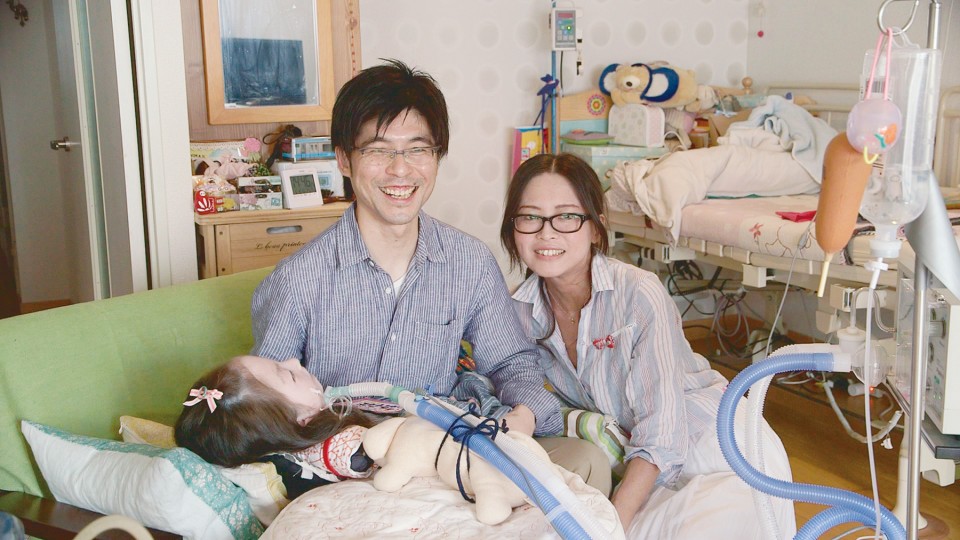 She is also connected online with other students and goes on field trips with her parents. Her physical condition stabilized as she grew, although she used to get sick every year, he said.

Her parents say they are now leading a spiritually fulfilling life after building new relationships with people related to Honoka's school -- enabling them to have associations in society that had been limited largely to relatives and those who support the family.

"This film poses a question," Kunitomo said. "There may be people who are shocked by watching it. But at the same time, children like Honoka are actually living in the same world."

Kunitomo says he is not seeking answers by posing the question of how to view and treat such children but believes it is critical that audiences ask themselves questions about the life of severely disabled people.

"I want audiences to cherish the emotional turmoil when seeing this film," he said.