After years of warning the world of the Russian threat to her homeland Ukraine and beyond, an activist and content creator found her worst prophecies fulfilled when she was forced to flee the country for an uncertain life as an evacuee in Japan.

But Lilia Tiazhka, 35, who has run a nonprofit English-language news website to combat what she says is Russian misinformation since its 2014 takeover of Crimea, is undeterred. Even now from Yokohama, near Tokyo, she works across time zones to expose the disastrous effects of the ongoing Russian invasion, all while striving to rebuild her and her teenage son's life thousands of miles from home. 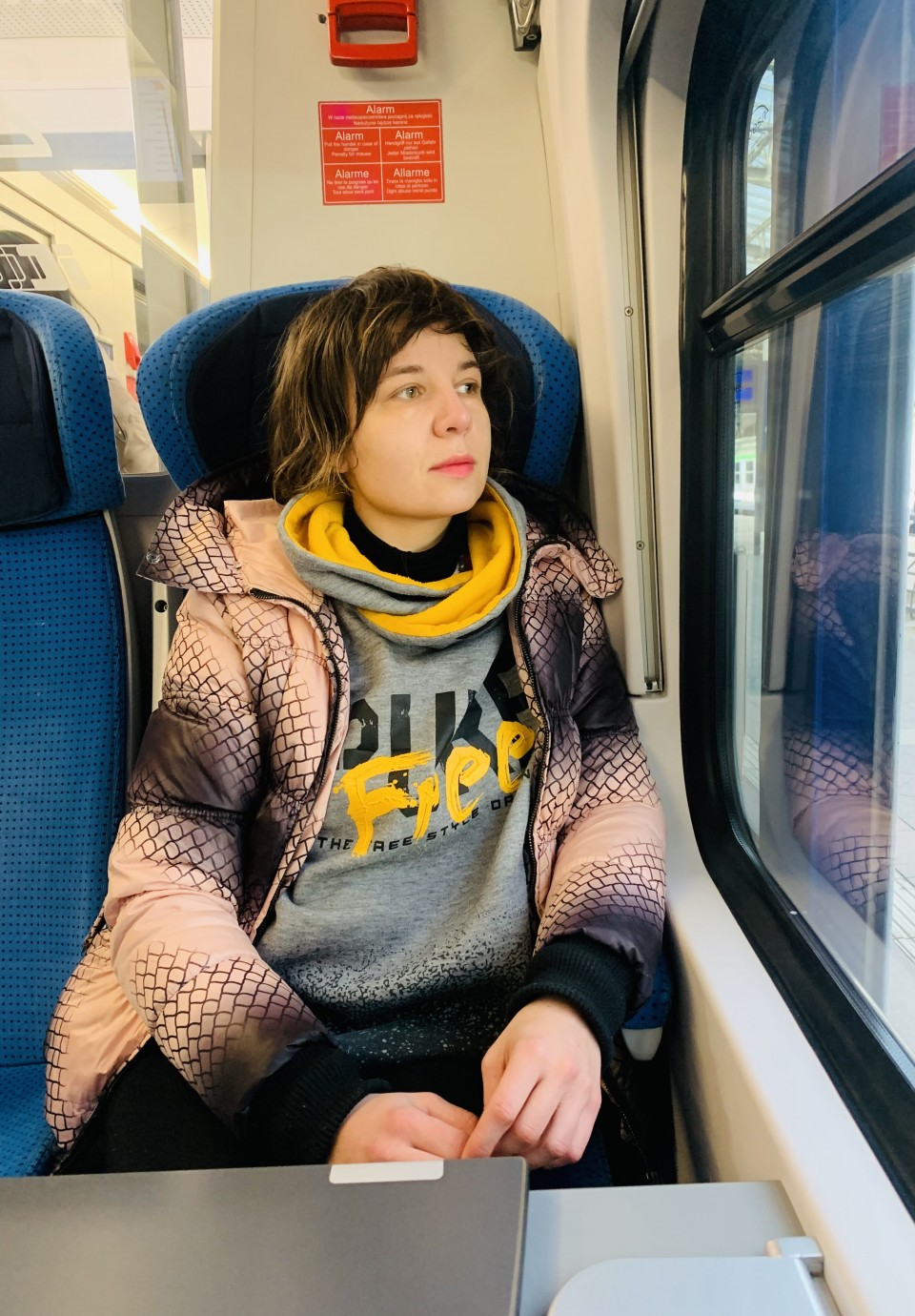 Ukrainian evacuee Lilia Tiazhka is pictured on a train to Warsaw, Poland, on March 9, 2022. (Photo courtesy of Lilia Tiazhka) (Kyodo)

"The world has to know how Russia kills Ukrainian civilians," Tiazhka told Kyodo News in a recent interview, describing the mission of UAposition, the volunteer-run news site that she set up with help from her IT engineer husband.

UAposition runs without advertisements and explicitly identifies its articles' sources of information to ensure transparency. Tiazhka works remotely with volunteers to report on the latest developments in Ukraine, including releasing statements by organizations and world leaders and the harrowing images captured on the ground.

Its reports on the downing in 2014 of the Malaysian Airways plane MH17 by a rocket over an area controlled by pro-Russia rebels in Ukraine's eastern Donbas region and Russia's involvement in backing separatists there have previously been picked up and shared by figures including Eliot Higgins, who founded the open-source journalism collective Bellingcat, and former Ukrainian Ambassador to the United Nations Volodymyr Yelchenko.

It also translated into English the entire contents of what Ukrainian authorities said was a transcript of phone calls in 2016 by Sergey Glazyev, then-adviser to Russian President Vladimir Putin, showing how Moscow took steps to create a false impression of widespread support in Crimea for joining Russia.

Before the invasion, Tiazhka neither imagined nor hoped she would leave Ukraine. She and her husband owned their home and managed websites for corporate clients in addition to UAposition. One of her other sites, Etnocook, showcases recipes and information on traditional Ukrainian cuisine, while another, also in English, raises awareness of the 1932-1933 Holodomor famine during the Soviet era that Ukraine has recognized as a genocide upon its people since 2006.

Earlier this month, Tiazhka said, she had been working late to post images coming out of Ukrainian President Volodymyr Zelenskyy's official Telegram account and other sources that showed the April 8 attack on Kramatorsk railway station that claimed 50 lives. After confirming the images, she quickly uploaded the news on UAposition's website and social media feeds.

She aims to move people across the world to support Ukraine. "We have to spread the information. We have to show the cruelty of Russian aggression, and to show the real face of Russia," she said.

Her journey to Japan began on Feb. 24, when the war overturned Ukrainian lives. She awoke to black smoke rising from where missiles had struck the airport outside her hometown of Ivano-Frankivsk in western Ukraine. 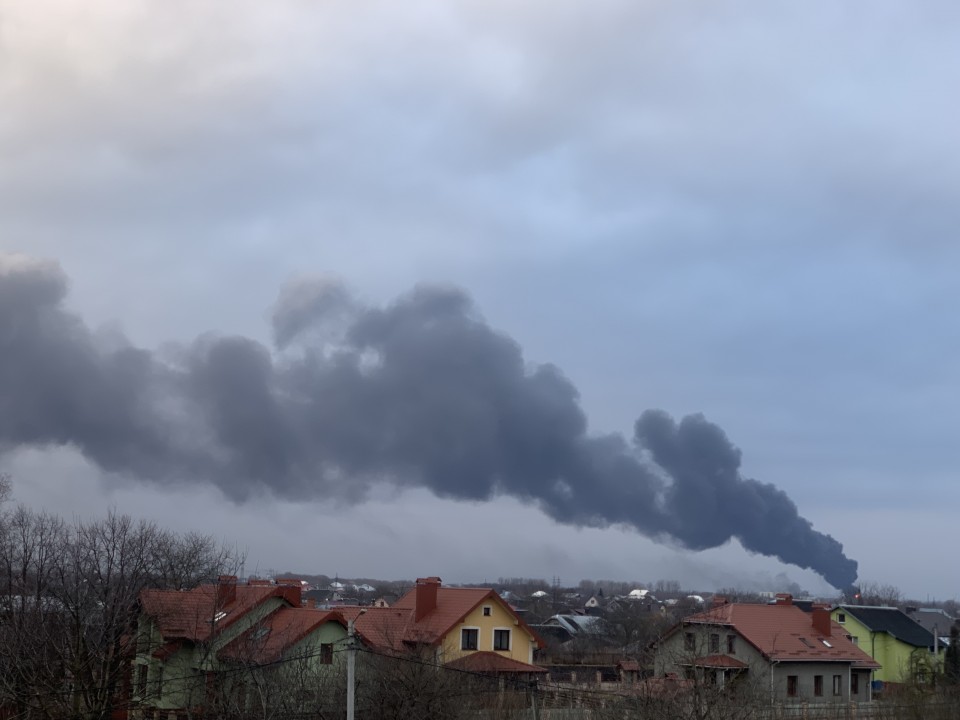 Smoke rises from a location near the airport in the western Ukraine city of Ivano-Frankivsk after it was hit by a Russian cruise missile, at the start of the invasion of Ukraine on the morning of Feb. 24, 2022. (Photo courtesy of Lilia Tiazhka) (Kyodo) 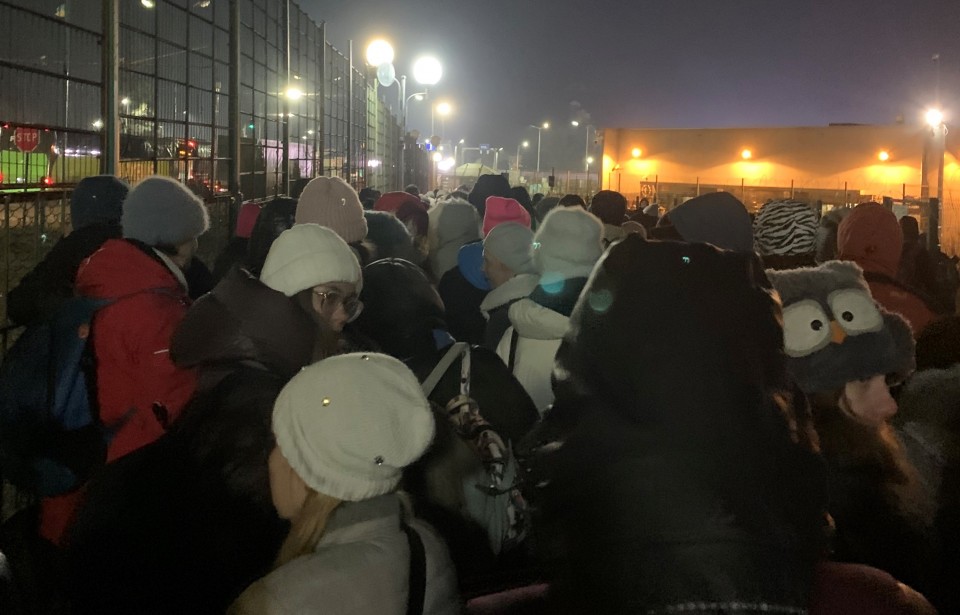 Evacuees from Ukraine wait between checkpoints in Ukraine and Poland on March 8, 2022. (Photo courtesy of Lilia Tiazhka) (Kyodo)

Her husband immediately volunteered in the Ukrainian military and now serves in the country's northeast. They agreed they would only discuss the specifics of his service upon his return -- for the nation's sake and his own safety. Now, she only knows he's safe when he calls. "We do everything with Ukraine in our heart," she said. 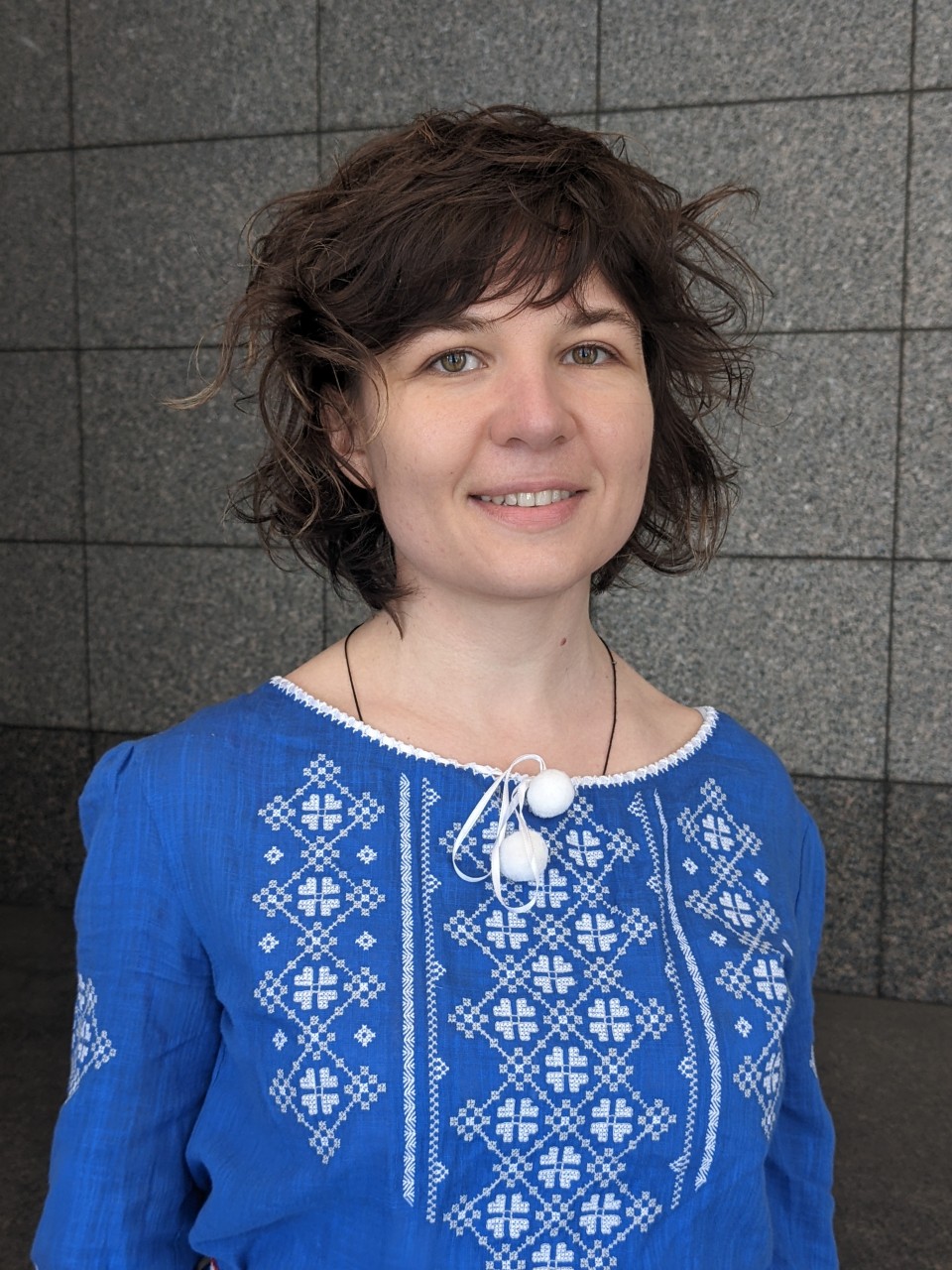 Tiazhka says her decision to leave Ukraine with her 14-year-old son came from fears of an impending nuclear disaster after reports of the Russian seizure of the Chernobyl Nuclear Power Plant and attacks on nuclear facilities.

Her son was initially resistant to leave and had to be talked around. Like his father, he wanted to stay and fight. The pair's trek to safety involved walking more than 10 hours in freezing conditions across the border to Poland -- at one point, advancing only about one or two paces every 15 minutes. Upon arriving in Poland, Tiazhka went straight to the Japanese Embassy to arrange the visas. She currently lives at the home of a Japanese family friend who acted as a guarantor for her and her son.

A total of 661 Ukrainian evacuees are known as of April 17 to have been permitted into Japan since the conflict began -- a significant proportion relative to the reported 1,865 Ukrainian residents of Japan as of December 2020.

The country's welcoming stance was telegraphed by Foreign Minister Yoshimasa Hayashi's April 5 flight from a G-7 summit in Poland with 20 evacuees. Support appears to be strong among the public, too, with the government's top spokesperson recently reporting it had received nearly 1,200 applications to provide aid from local governments and private businesses.

"I can help Ukraine here, and I have to build my life here. I have to do everything for Ukraine from where I am," Tiazhka said. While she is determined to learn the language and lead a new life, her homeland's pull is undeniable. She says she will return to Ukraine any way she can.

A Razumkov Centre survey of evacuees from Ukraine in countries around the world between March 15 and April 1 suggests Tiazhka is far from alone in her desire. Almost 80 percent of respondents said they would return after the war.

But for now, people like her and her son are forced to rely on the kindness of institutions and individuals to recreate a version of their lives in unfamiliar surroundings. In Tiazhka's case, her daily efforts to convey the conflict's reality only compound how suddenly home has become a distant place.