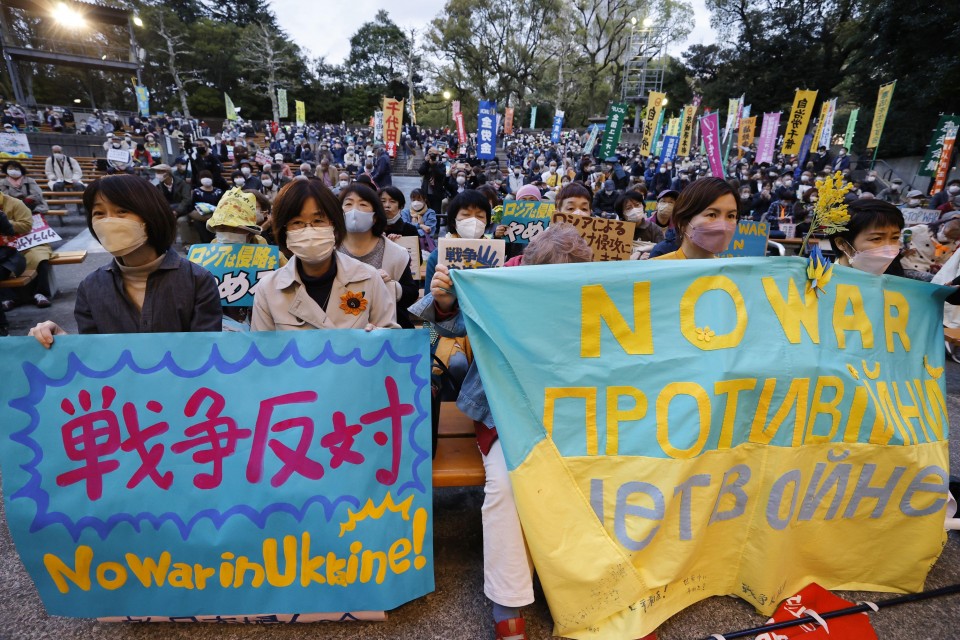 People gather at Tokyo's Hibiya Park for a rally to protest against Russia's invasion of Ukraine on April 8, 2022. (Kyodo) ==Kyodo

TOKYO - German Chancellor Olaf Scholz is planning to visit Japan in late April to hold talks with Prime Minister Fumio Kishida, with Russia's invasion of Ukraine and how to manage China's rise likely to top the agenda, a government source said Saturday.

Scholz will meet with Kishida possibly on April 28, the Japanese source said. It will be his first visit since taking office in December last year.

G-7 finance chiefs to meet in Washington on April 20: sources

WASHINGTON - Finance ministers and central bank governors of the Group of Seven major developed countries are due to meet in Washington on April 20, sources familiar with the plan said Saturday.

The finance chiefs from the seven countries -- Britain, Canada, France, Germany, Italy, Japan and the United States -- will discuss how to ramp up pressure on Russia over its invasion of Ukraine, according to the sources.

TOKYO - Japan and the Philippines on Saturday agreed to work toward signing a treaty designed to facilitate joint exercises and reciprocal visits of their forces as China's increasingly assertive pursuit of sovereignty claims in regional waters has upset its neighbors.

The deal was struck during a meeting in Tokyo of their foreign and defense ministers, in which they expressed "serious concern" about the situation in the East and South China Seas and "strongly opposed" any action that may inflame tensions, according to their joint statement.

China warns U.N of adding "fuel to fire" in responding to N. Korea

WASHINGTON - China's envoy on North Korean issues Liu Xiaoming said Friday the U.N. Security Council should not add "fuel to the fire," indicating his reluctance to back U.S. efforts to pursue a new U.N. sanctions resolution on Pyongyang following a series of recent ballistic missile tests.

Noting that he has met White House Indo-Pacific coordinator Kurt Campbell, Liu, who has been visiting the United States, said on Twitter the council should play a "constructive role for the political settlement" of issues related to the Korean Peninsula.

TOKYO - The Japanese and Russian governments are arranging to start negotiations over the fishing quota of salmon and trout spawned in Russian rivers, several Japanese government sources said Friday.

Although the two nations hope to start the talks next week, the attempt by Japan to decide on the quota for its exclusive economic zone could face difficulties as Russia opposes the economic sanctions imposed by Japan along with other countries in the face of Moscow's invasion of Ukraine.

HONG KONG - The Hong Kong government's former No. 2, John Lee, on Saturday officially announced his bid for the city's leadership election slated for May 8.

Lee, a security hard-liner widely seen as the only candidate favored by the mainland government, had tendered his resignation as chief secretary for administration Wednesday and it was approved by Beijing on Friday.

WASHINGTON - President Joe Biden on Friday signed into law a bill to suspend normal trade relations with Russia amid Moscow's ongoing invasion of Ukraine, paving the way for the United States to raise tariffs on imports.

The move came after the United States, Japan and other Group of Seven industrialized nations agreed last month to take steps to strip Russia of its "most-favored nation" status, under which the country enjoyed low tariffs and other benefits as a member of the World Trade Organization.

Insurers such as Tokio Marine & Nichido Fire Insurance Co. will also not renew existing contracts after their terms have expired, the sources said, in a move that could leave Japanese firms uninsured or facing higher premiums by entering into new agreements with local insurers.