South Korea is making its mark on the global arms trade, with President Moon Jae In shepherding large deals to export indigenous weapons systems during his recent visits to Australia and the Middle East.

The Asian country, which faces a constant security threat across the border from North Korea, is the world's ninth-largest arms exporter and has grabbed more than half of the market share for self-propelled artillery.

Moon's determination to promote South Korea's homegrown military hardware to the world was demonstrated in an eye-catching fashion last October when he flew into a military exposition on the outskirts of Seoul in a domestically developed FA-50 aircraft.

"Capable of advanced training, air combat and precision bombing, the FA-50 is an excellent light attack aircraft that has proven its remarkable price-to-performance ratio," he said at the biennial Seoul International Aerospace and Defense Exhibition, which drew at least 440 businesses from 28 countries. 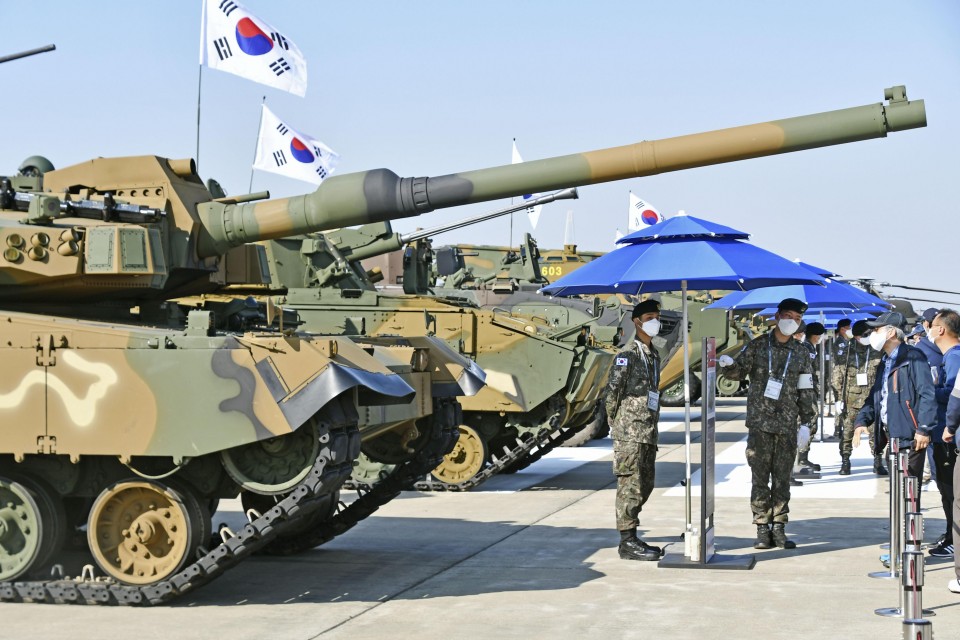 A tank is displayed at the Seoul International Aerospace and Defense Exhibition in Seongnam, South Korea, in October 2021. (Kyodo)

The exposition displayed various pieces of homegrown equipment including tanks. "We will have no fear facing the aging North Korean tanks," said a South Korean military officer who was explaining the weaponry at the event.

The South Korean defense industry is as eager to sell its weapons systems overseas as the government. That includes Korea Aerospace Industries Ltd., which allowed foreign reporters to see the production site of its KF-21 supersonic fighter jet.

Moon's recent arms deal blitz started in December, when on his visit to Australia, the country signed a contract for South Korean contractor Hanwha Defense to provide 30 units of K9 self-propelled howitzers to be manufactured in Australia.

In all, around 1,800 units of K9 howitzers have been in use in South Korea and elsewhere, and customers include Nordic countries that are wary of Russia, as well as India, which has a territorial dispute with China, according to the South Korean government and local media.

Moon's visit to the United Arab Emirates in mid-January also led to a deal to provide the Gulf country with the Cheongung 2 medium-range surface-to-air missile system, considered the South Korean equivalent of the United States' Patriot missile defense system. It would be the first time for South Korea to export its anti-ballistic missile system, and the contract is worth 4.1 trillion won ($3.4 billion).

On Feb. 1, after the president returned from the Middle East, the government announced a deal worth more than 2 trillion won in which South Korea will provide Egypt with K9 howitzers, the largest export deal involving the South Korean land-based weapon.

The deal came on the heels of Moon discussing boosting defense industry cooperation with President Abdel Fattah el-Sisi on his visit to Cairo.

Moon has boasted that the contract served as an opportunity for recognizing the excellence of South Korean weapons systems. 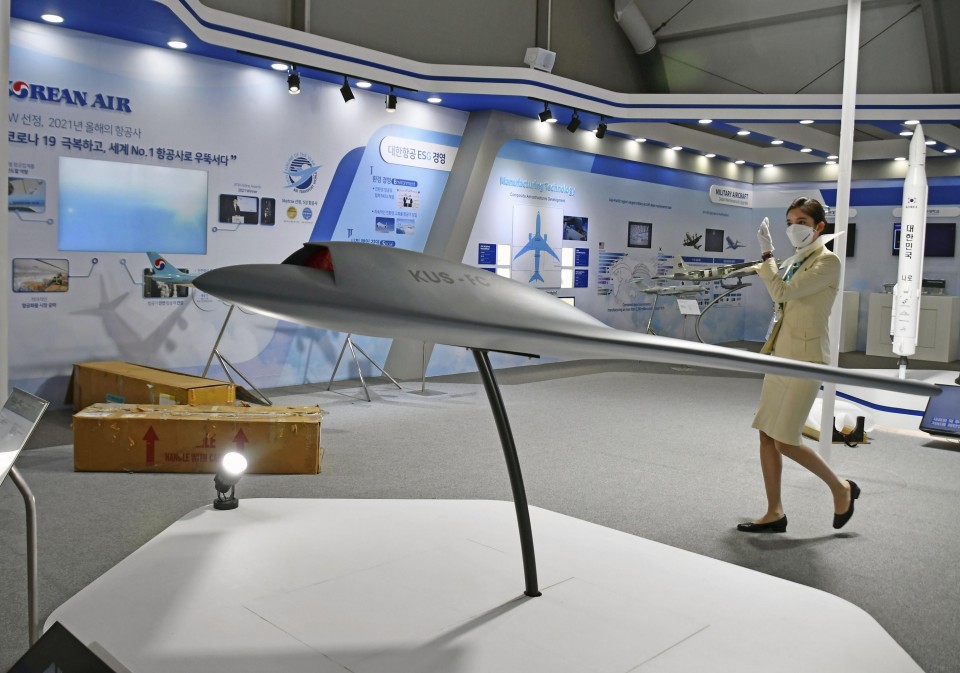 A model of a domestically developed drone is displayed at the Seoul International Aerospace and Defense Exhibition in Seongnam, South Korea, in October 2021. (Kyodo)

South Korea was the ninth-largest arms exporter during the 2016-2020 period, accounting for 2.7 percent of the world's defense exports, according to the Stockholm International Peace Research Institute. That was triple the country's share during the previous five years.

Moon, who became president in 2017 and is set to end his tenure in May, is known as being dovish toward North Korea, pushing for an end-of-war declaration for the 1950-1953 Korean War as a way to improve ties with the nuclear-armed neighbor.

But that dovishness has not translated into a peacenik meekness elsewhere. Moon remains ambitious about boosting defense capabilities and exporting domestic defense equipment.

"The defense industry will be developed into a key national growth engine that goes beyond national defense," the president said at the defense expo.

A diplomatic source in Seoul explains the popularity of South Korean defense weapons lies largely in their cost-effectiveness. "South Korean weapons are winning the hearts of middle-power countries that prefer low-cost weapons that meet certain standards to most advanced but expensive weapons," the source said.

Seoul's drive to become a major arms producer and supplier leaves some South Koreans uneasy, however, as the weapons exports would mean South Korea playing a role in foreign conflicts.

The People's Solidarity for Participatory Democracy, a major South Korean nongovernmental group, issued a statement in November opposing South Korean arms exports as a policy that aims to "achieve economic development based on someone's sacrifice."

The civic group added that people in conflict areas are dying and robbed of normal life as South Korean weapons are exported.