Japanese Prime Minister Fumio Kishida and his Indian counterpart Narendra Modi agreed Saturday they will never tolerate attempts to alter the status quo by force in any region in response to Russia's aggression in Ukraine.

The two leaders affirmed that the war in Ukraine must be resolved based on international law, Kishida said at a joint news conference after a meeting in New Delhi, while Modi made no reference to Russia's invasion of Ukraine during the press event. 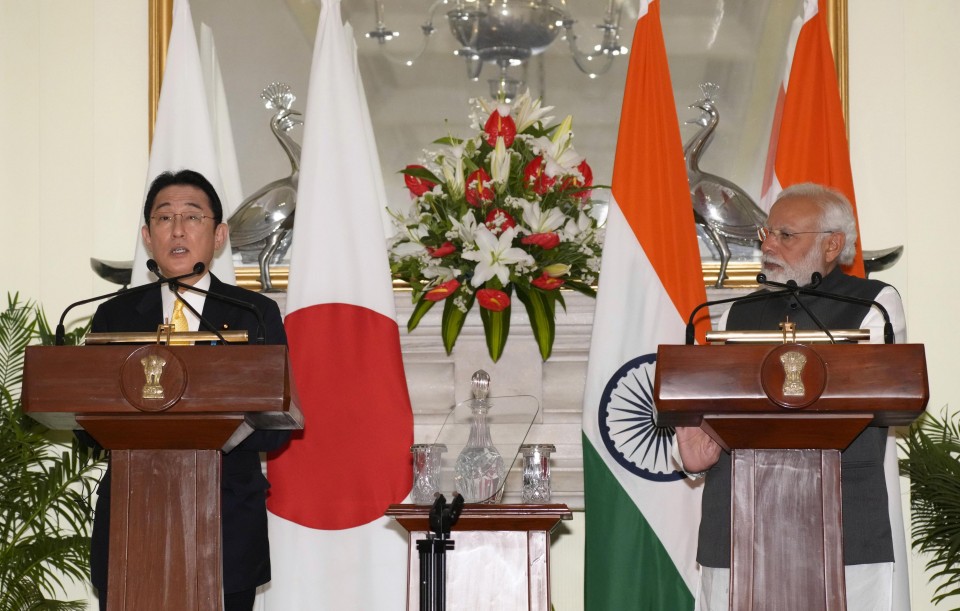 The talks came as Japan is trying to seek that India, which has traditionally had close ties with Russia, aligns with it, the United States, Europe and others in condemning the Russian aggression in Ukraine that began on Feb. 24.

In a joint statement issued after the talks, they aired "serious concern about the ongoing conflict and humanitarian crisis" in Ukraine, and urged an "immediate cessation of violence," but did not refer to Russia directly.

While the war in Ukraine is in a stalemate, Moscow's attacks have been intensifying, with indiscriminate bombardment adding to the damage to civilians.

Russian forces said Saturday they fired air-to-ground "Kinzhal" missiles to destroy an underground missile depot in western Ukraine, the first use of a hypersonic missile in actual warfare.

The number of Ukrainians forced to leave their homes has reached nearly 10 million, as 6.48 million people have been displaced internally, according to the International Organization for Migration, while the Office of the U.N. High Commissioner for Refugees said 3.32 million people have fled Ukraine.

Following Moscow's assaults on nuclear power plants in Ukraine, Kishida and Modi called for ensuring the safety of nuclear facilities in the former Soviet republic, according to the statement.

The two leaders also reaffirmed their vision of a free and open Indo-Pacific, amid fears Russian attacks on Ukraine could make China more assertive in the Indo-Pacific region.

"We agreed to oppose attempts to unilaterally alter the status quo in the East and South China seas," Kishida said.

Kishida is on a two-nation tour from Saturday through Monday that will also take him to Cambodia.

The two leaders also affirmed the importance of the Quad grouping of Australia, India, Japan and the United States. Kishida invited Modi to a Quad summit that the Japanese leader will host possibly in May.

On the economic front, Kishida unveiled a plan to invest 5 trillion yen ($42 billion) in India over five years, topping the 3.5 trillion yen pledged by then Japanese Prime Minister Shinzo Abe during his 2014 visit to the country.

"India's partnership with Japan should become deeper. Through the partnership, peace, prosperity and stability should be encouraged in the Indo-Pacific region," Modi said at the press conference, adding, "It is not only important for both of our countries but for the world."

Japan has been supporting urban infrastructure development in India, including a project to introduce Japanese high-speed trains to the South Asian country.

The two leaders welcomed an acquisition and cross-servicing agreement signed in 2020 that will allow the Japanese Self-Defense Forces and the Indian Armed Forces to share supplies and transport duties.

The visit, which marked Kishida's second overseas trip since taking office last October, coincides with the 70th anniversary of the establishment of diplomatic relations between Japan and India.

On Sunday, Kishida will travel to Cambodia to meet with Prime Minister Hun Sen as part of Tokyo's efforts to strengthen cooperation with the Association of Southeast Asian Nations.