For Kateryna Gudzii, the Ukrainian traditional instrument she plays has been her way of sharing the culture and music of her homeland with Japan -- and this more than decade-long personal mission takes on a deeper meaning now Ukraine has been thrust into the global spotlight following Russia's invasion.

"When I perform, I do so with thoughts that the war would end and there will be peace in the world," said Gudzii, who is only one of two "bandura" players actively performing in Japan where she began living in 2006.

The 35-year-old who goes by the stage name Kateryna and lives in Yokohama, near Tokyo, said the 65-stringed bandura, which dates back to the 12th century and is traditionally played by blind performers, is a "unique musical instrument like no other and one that is connected to the culture, tradition and ethnicity of Ukraine." 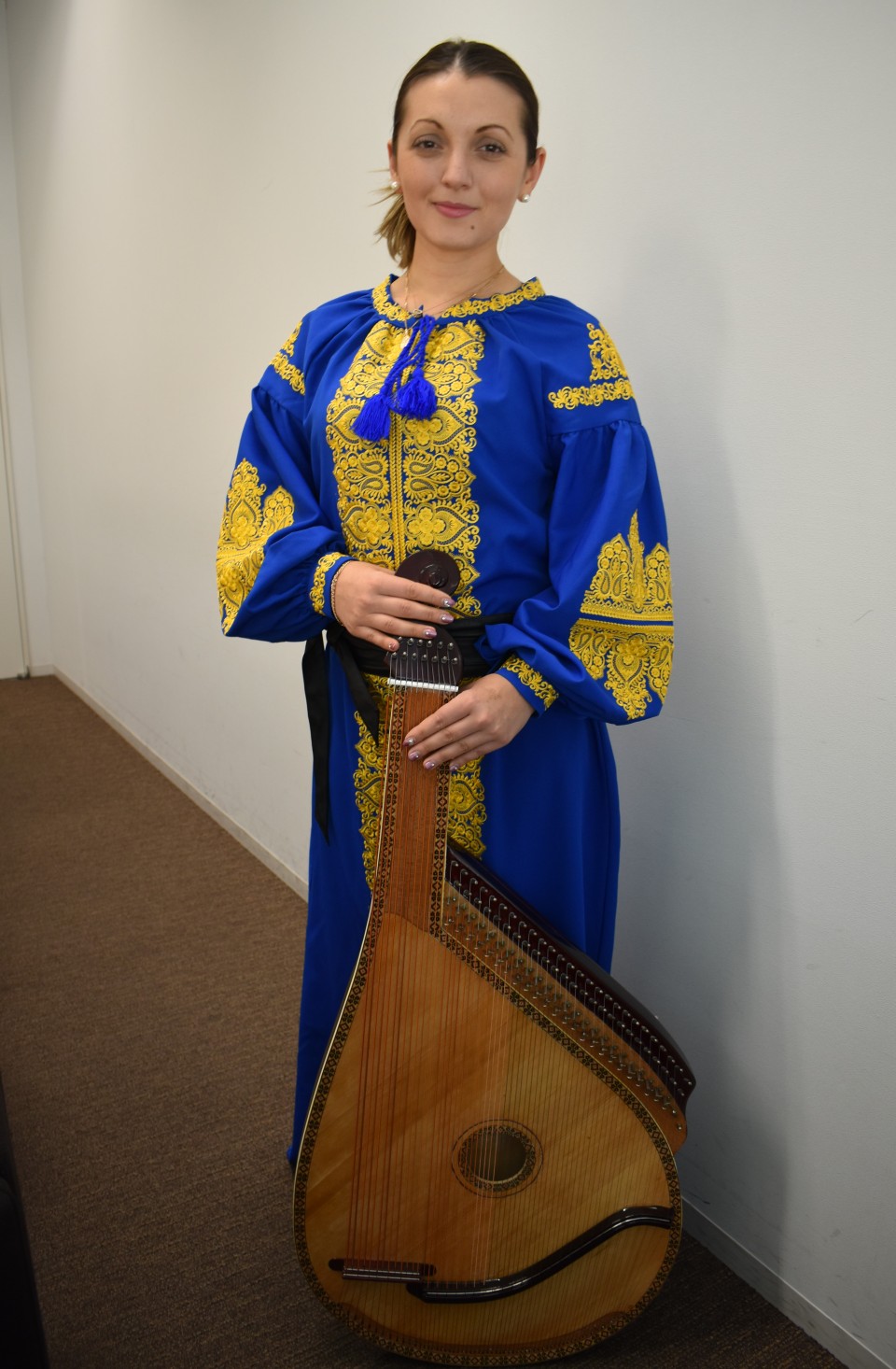 Kateryna Gudzii poses with the Ukrainian traditional instrument "bandura" she plays in a photo taken in Tokyo on Feb. 28, 2022. (Kyodo)

Music is deeply rooted in Ukraine's way of life and Gudzii has been immersed in it since childhood. She was born in Pripyat, a town about 2.5 kilometers from the Chernobyl nuclear power plant, in March 1986, a month before a reactor at the plant exploded in what would become one of the world's worst nuclear accidents.

She has no memory of Pripyat, which existed for workers at the plant and their families and is now a ghost town, as she and her family had to move to Kyiv after the accident. For now, her 68-year-old mother remains in the capital in housing dedicated to Chernobyl evacuees.

A music teacher who also evacuated went on to eventually form a musical group for children impacted by the accident. Gudzii joined from age 6 and through that group first came to Japan in 1996 for performances held across the country.

Now performing solo, she makes it a point to introduce the Ukrainian culture to her audience.

The bandura has a sad history, Gudzii said, citing an incident in which about 300 bandura players were said to have been killed and their instruments destroyed when Soviet dictator Joseph Stalin tried to deny world exposure to Ukraine's culture.

As attacks and fighting continue in parallel with diplomatic negotiations and the establishment of humanitarian corridors to evacuate civilians, there seems to be no clear, immediate sign a breakthrough in the crisis is imminent.

Gudzii thinks every day of her mother who is living on her own in Kyiv. "I get in touch with her every hour and as much as possible I talk to her" to ease her fears, said the youngest of four daughters.

In their latest conversation before the weekend, she sought to cheer up her mother, who looked "emotionally tired." The bandurist talked about how people in Japan are thinking about her mother and also of plans to someday bring her to Japan.

Initially, her mother did not think of evacuating from Kyiv as she had "never imagined a full-scale war would break out."

But tensions have since escalated, with Russian forces continuing their advance.

Gudzii said she knows she has only limited power but is determined to do her bit as a Ukrainian interpreter for Japanese television to "convey the latest information on Ukraine."

While juggling that job, she continues to prepare for upcoming performances in Japan, one of which takes place on the eve of March 11 to commemorate the massive earthquake-tsunami disaster and Fukushima nuclear accident that hit Japan's northeast.

For the past years, she plays with the 2011 disaster in mind, but for this year, she said, her performance would also be a prayer for peace in light of the Ukraine crisis.

In a similar chord to challenges faced by children in Fukushima, she also faced discrimination as someone who was born near Chernobyl, where the accident was ranked 7 on an international scale of nuclear crises, the highest rating and on a par with Fukushima.

"Some would not play with me or touch me for fear they would get radiation if they did so," she recalled. Her father died around 10 years ago due to radiation-caused cancer linked to his work related to the Chernobyl plant.

As a bandurist in Japan, she has reached out to a broader audience by playing and singing to the tunes of traditional Japanese songs such as "Furusato" (Hometown).

Before the Russian attacks ever took place, she had planned to bring people to Ukraine.

But the coronavirus pandemic deterred her envisioned tour of the Eastern European country. Now, the invasion has made her dream even more distant, with the deaths that Ukraine says already number in the thousands, including its civilians, as well as the destruction of vital infrastructure, making any journey impossible.

Gudzii had hoped to bring her mother to Japan but this also fell through due to COVID-19.

"I wish I can bring her here. Until I have her by my side, I don't think I will feel at ease," she said.