The number of people who stayed at hotels and other accommodation facilities in Japan hit a record low in 2021 for the second straight year, according to government data, as the coronavirus pandemic led to prolonged border controls and a slowdown in the recovery of domestic travel demand.

The cumulative total of guests at hotels and inns was 315.75 million, down 4.8 percent from 2020 and 47.0 percent from 2019, according to preliminary data recently released by the Japan Tourism Agency. 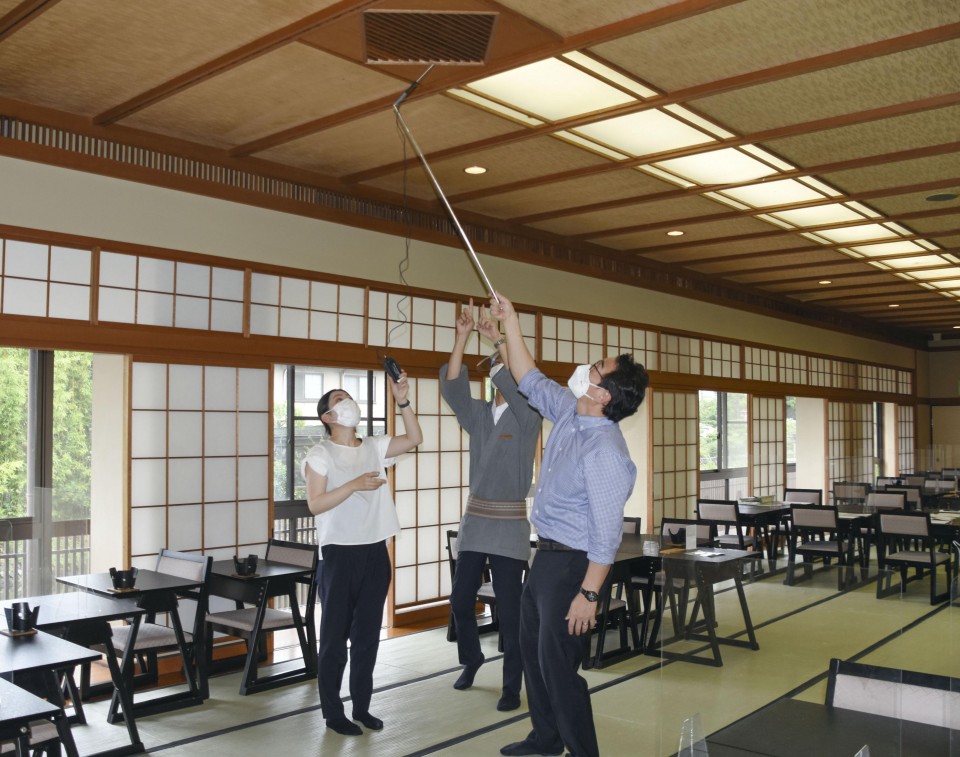 File photo shows staffers checking sanitation measures against the coronavirus in a banquet room in a long-established inn in Kyoto, western Japan, in August 2021. (Kyodo)

The figure, which includes people who may have been counted twice or more, is the lowest since comparable data became available in 2011.

The number of domestic guests was up 0.1 percent from 2020 to 311.54 million. The total of foreign guests dropped 79.3 percent from the previous year to 4.21 million, despite increasing in July and August when Tokyo staged the Summer Olympics.

The data showed that the monthly total of domestic guests increased in the final months of the year, exceeding 30 million in October, November and December, after the government lifted COVID-19 emergency measures across the country due to a decline in new infections.

As for foreign guests, the annual figure was down 96.4 percent compared with 2019 amid border controls implemented by the governments of Japan and other countries.

The Tokyo Olympics and Paralympics were held mostly without spectators. Athletes, officials and members of the media were among nonresident foreigners who entered Japan for the games.

Meanwhile, hotels have continued to struggle this year as they see few bookings due to a spike in infections triggered by the highly contagious Omicron variant.

Many of the country's 47 prefectures are under a quasi-state of emergency issued by the central government, with people asked to refrain from traveling between prefectures unless necessary.

The government has also suspended its subsidy program to support local tourism in Japan, despite its hopes to resume it as early as late January.