Incumbent Taketoyo Toguchi won a second term as Nago mayor in the southern Japanese prefecture of Okinawa on Sunday, in a relief for Prime Minister Fumio Kishida who is pushing for the controversial relocation of a U.S. military base to the city's coastal area.

Toguchi, 60, backed by the Liberal Democratic Party and its coalition partner Komeito, defeated anti-relocation candidate Yohei Kishimoto in the election, dealing a setback to local efforts to thwart the base construction by the national government.

The mayoral race was closely watched as a precursor to a gubernatorial election in the island prefecture later this year, along with an upper house race that is expected to take place this summer at the national level. 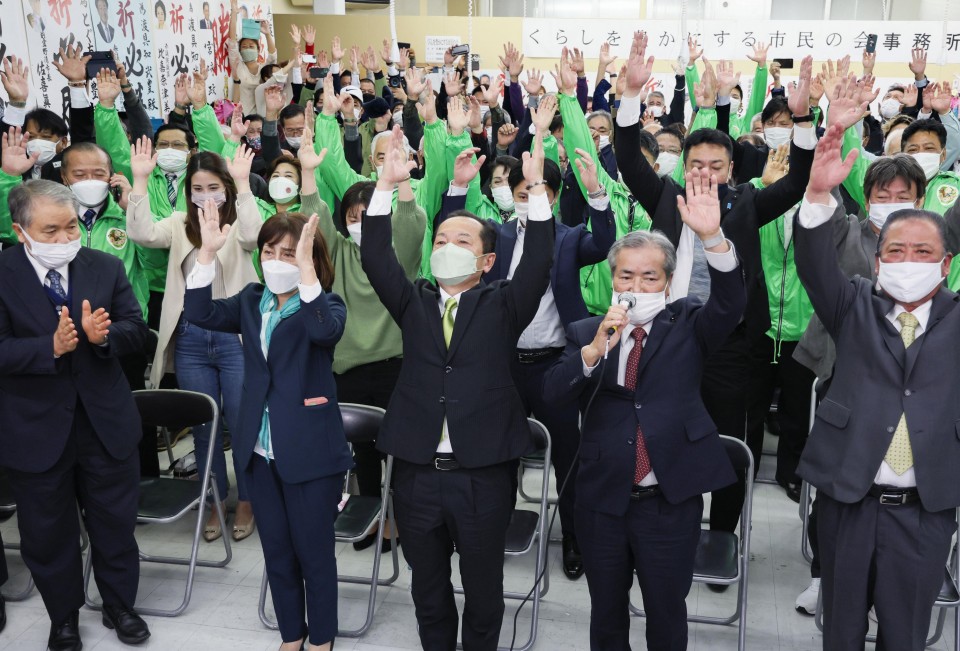 Incumbent Taketoyo Toguchi (C) celebrates after securing a second term as Nago mayor in the southern Japanese prefecture of Okinawa on Jan. 23, 2022. (Kyodo)

Okinawa Gov. Denny Tamaki had thrown his support behind Kishimoto, who was endorsed by the major opposition Constitutional Democratic Party of Japan and the Japanese Communist Party among others.

"Voters approved of my steering of the city government for the past four years," Toguchi told reporters after his victory.

Okinawa hosts the bulk of U.S. military installations in the nation and anti-military sentiment runs deep. The prefecture is celebrating the 50th anniversary of its reversion to Japan following U.S. occupation.

The relocation of the U.S. Marine Corps Air Station Futenma to a coastal area in Nago from its current, densely-populated location in Ginowan has met stiff opposition even as the Japanese government has already begun landfill for the transfer.

Toguchi has not clarified his stance on whether he supports the relocation but touted the benefits of financial support extended by the national government on the premise that the plan goes through. The government froze the aid during the time of Toguchi's predecessor who was against the base relocation.

When asked about the base transfer, he said, "There is nothing we can do other than to closely follow developments between the central and Okinawa government."

Tensions between the national and Okinawa governments remain high as Tamaki rejected in November the Defense Ministry's plan to make necessary changes to the landfill work following the discovery of weak ground that needs to be reinforced.

Nearly nine percent of the soil needed for the landfill had been poured into the area at the end of 2021, according to the Defense Ministry.

"I tried to get the message across that there should be no more military bases built in Okinawa. But it didn't resonate with people in this city," Kishimoto said at his campaign office.

The base transfer plan has divided the city with a population of around 64,000. Sunday's mayoral race was the seventh since a 1996 Japan-U.S. agreement on returning the land occupied by the Futenma base.

Following Kishimoto's defeat, Okinawa Gov. Tamaki told reporters that his government's position to oppose the base transfer "will not budge even by one millimeter."

Voter turnout was at a record low 68.32 percent, down 8.6 points from the previous election in 2018, according to the local election board.

Campaigning for the mayoral race was marred by surging COVID-19 cases in the prefecture, which has been under a quasi-state of emergency.

Okinawa is increasingly seen as strategically important due to its proximity to North Korea whose nuclear and missile development has kept Japan on alert, and to the Japanese-administered, Chinese-claimed Senkaku Islands in the East China Sea. It is also near the frontline of heightened cross-strait tensions between Taiwan and China.