Japan decided Friday to place three prefectures with surging COVID-19 cases under a quasi-state of emergency as their governors suspect the viral resurgences have started from U.S. military bases there, while the nationwide tally of infections for the day hit a four-month high of more than 6,000.

The declarations in Okinawa, Yamaguchi and Hiroshima will be effective from Sunday to Jan. 31, allowing the prefectures to bolster anti-coronavirus measures and request that dining establishments shorten their business hours and stop serving alcohol.

Health experts have warned of a sixth wave of the pandemic in Japan amid the spread of the highly transmissible Omicron variant of the virus.

The enforcement of the measures, the first under Prime Minister Fumio Kishida, who took office in October, is designed to rein in rapidly spreading infections and prevent local medical systems from being stretched too thin. 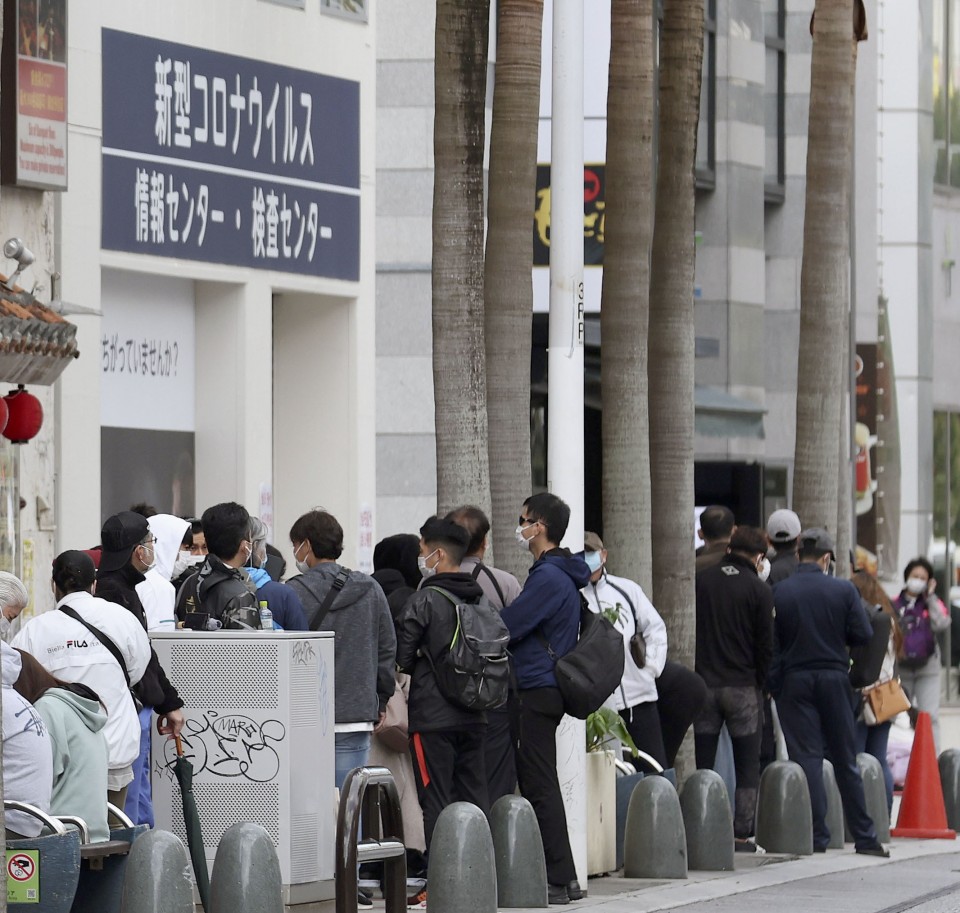 A government panel gave the go-ahead before Kishida's decision, just as the daily count of COVID-19 cases hit a record 1,414 in Okinawa and 429 in Hiroshima, its highest figure to date. Yamaguchi reported 180, its second-highest daily number.

The three prefectures made up about a third of the nation's tally, which stood at 6,214 -- an over 10-fold increase from a week earlier.

"We judged that we need to cope with the spread of infections swiftly," Kishida said at a meeting on the coronavirus response at his office.

"Infection numbers have been rising nationwide through the year-end, New Year period and community transmissions of Omicron have been reported in parts of the nation," he added.

Japan had seen a clear downtrend in newly confirmed coronavirus cases as vaccinations progressed. But the Omicron strain has posed new challenges, prompting Okinawa Gov. Denny Tamaki to describe the speed of its spread as "staggering and explosive."

Community spreads of the new strain have been confirmed in large cities including Tokyo and Osaka. The Tokyo metropolitan government reported 922 new cases of COVID-19 on Friday, the highest in about four months.

Public facilities in Tokyo, including the popular Ueno Zoological Gardens, will be temporarily closed from next Tuesday amid a resurgence of coronavirus infections, the metropolitan government said. 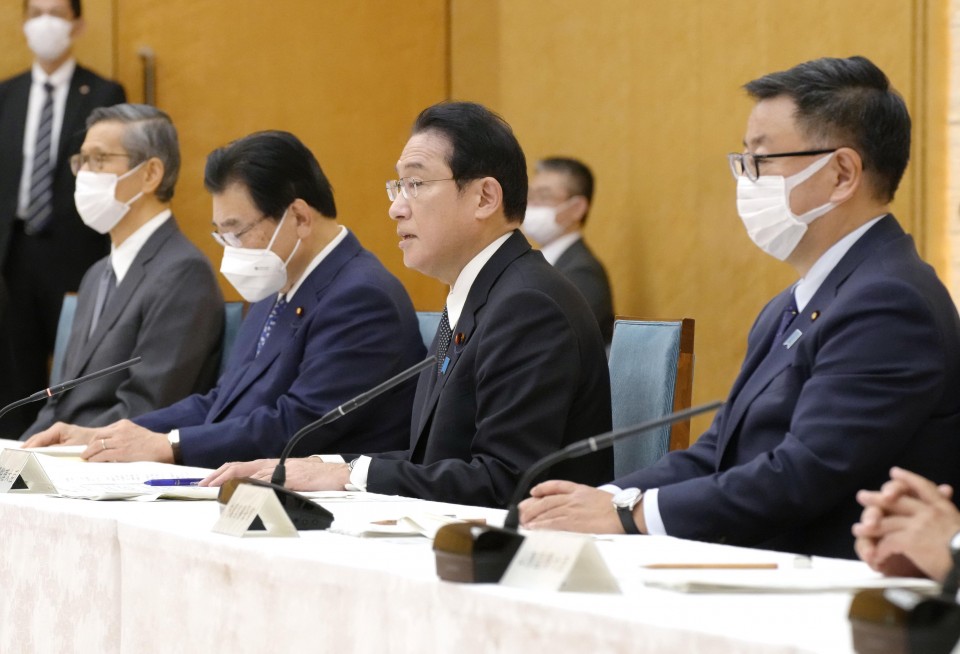 Japanese Prime Minister Fumio Kishida (2nd from R) says during a government task force meeting in Tokyo on Jan. 7, 2022, that Okinawa, Hiroshima and Yamaguchi prefectures will be placed under a quasi-state of emergency, from Jan. 9 to Jan. 31, after being hit by surging COVID-19 cases. (Kyodo) ==Kyodo

The temporary closures will not affect parks and libraries, and those selected by lottery to see the public debut of twin giant pandas born at the zoo last June will still be granted entry between next Wednesday and Friday, it said.

Following a cluster of infections at the U.S. Marine Corps' Camp Hansen in Okinawa and sharp increases in COVID-19 cases at a different base in Yamaguchi in western Japan, local officials and some health experts now believe such outbreaks have spilled into nearby areas and beyond. Hiroshima neighbors Yamaguchi.

Okinawa Gov. Tamaki has said there is "no doubt" that U.S. military bases in the southern island prefecture are one of the major factors behind the rapid increase in infections, while Yamaguchi Gov. Tsugumasa Muraoka has cited results of genomic analyses of virus samples taken from U.S. base workers and residents.

Japan has urged the United States to make sure anti-virus steps are properly enforced by U.S. forces in the country.

But Kishida remains cautious about clearly blaming the U.S. military presence for the resurgence of the virus in those areas.

In Okinawa, Tamaki asked for cooperation from local residents and businesses to rise out the crisis.

"If we see infections spread further, we will have to consider switching to a state of emergency. In that case, we would have no choice but to call for stricter restrictions," he said at a press conference. 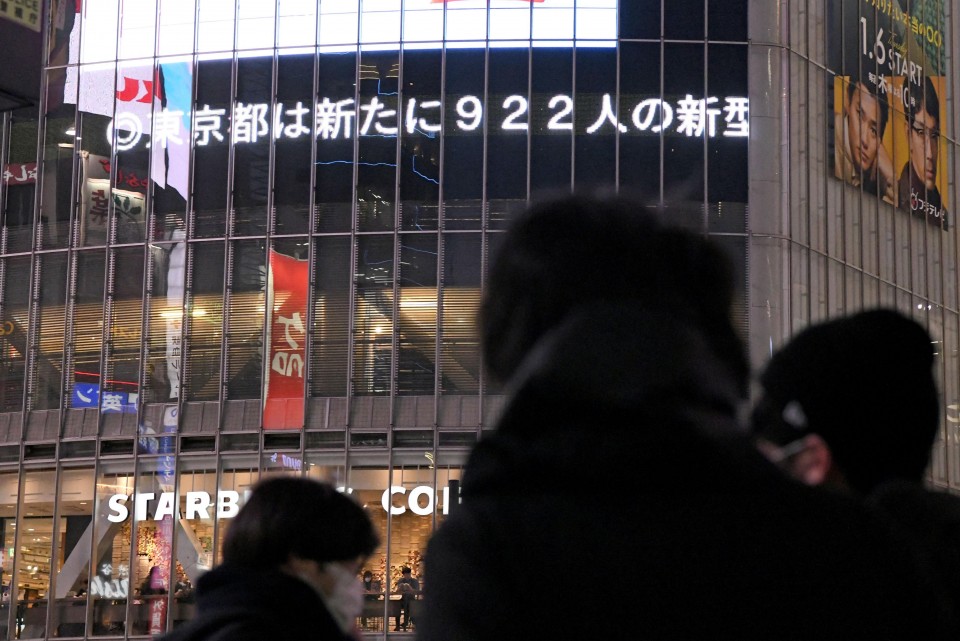 A large screen in Tokyo's Shibuya area displays news that 922 new coronavirus cases were confirmed in the Japanese capital on Jan. 7, 2022. (Kyodo) ==Kyodo

The daily count in the prefecture has yet to peak and the infection situation is unlikely to subside before the end of January, he said at a news conference.

The stakes are high for Kishida, who saw his predecessor Yoshihide Suga step down after public dissatisfaction grew over what was perceived as the government's poor handling of the pandemic.

Kishida has vowed to take all necessary steps to pre-empt a surge in coronavirus cases, banning the entry of nonresident foreign nationals in Japan and accelerating the rollout of vaccine booster shots.

While a full state of emergency is declared over a whole prefecture, a quasi-emergency can be more limited in terms of coverage and restrictions. In Yamaguchi and Hiroshima, only certain cities and towns will be subject to the measure while all of Okinawa will be covered.

Governors can ask and then order businesses such as restaurants to close early and stop serving alcohol. Defying such orders without legitimate reasons may result in a fine of up to 200,000 yen ($1,700).

Even under a quasi-emergency, dining establishments certified by local authorities as taking proper anti-virus steps have been able to provide alcohol. But the Japanese government decided to change the rule in the face of Omicron's spread, enabling prefectural governors to request that such eateries stop serving alcohol.

The change is yet another setback to service providers who have lagged in the recovery from the initial COVID-19 fallout. 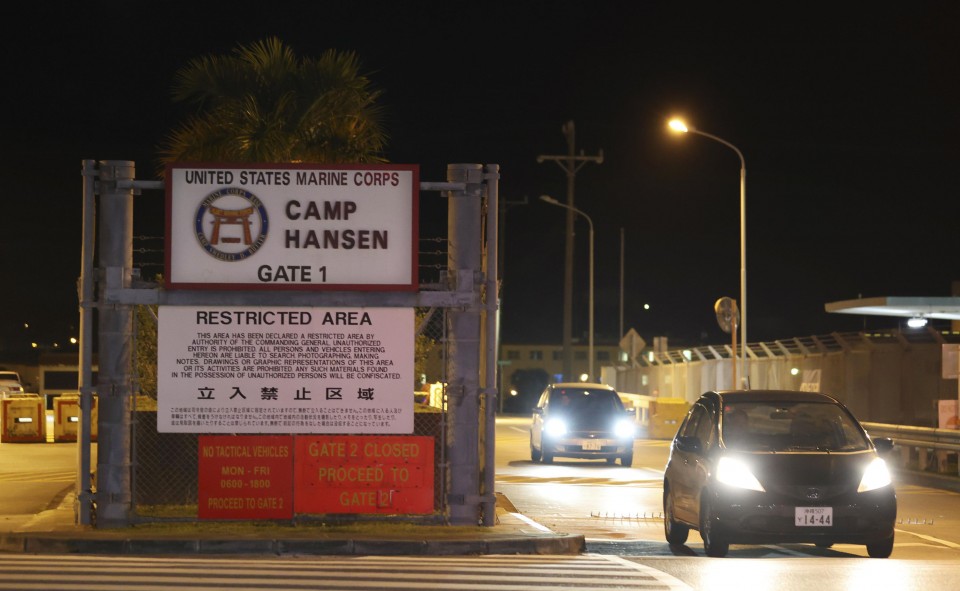 Photo taken on Jan. 6, 2022, shows the U.S. Marine Corps' Camp Hansen in the Okinawa Prefecture town of Kin, southern Japan. A large number of COVID-19 cases were recently reported at the U.S. base. (Kyodo) ==Kyodo