The Nikkei stock index plunged over 3 percent on Thursday, finishing at its lowest level in 14 months, as selling accelerated on growing fears that the U.S. Federal Reserve may implement more interest rate increases than expected.

Every industry category lost ground, except for insurance and mining issues. Decliners were led by service, precision instrument and electric appliance issues. 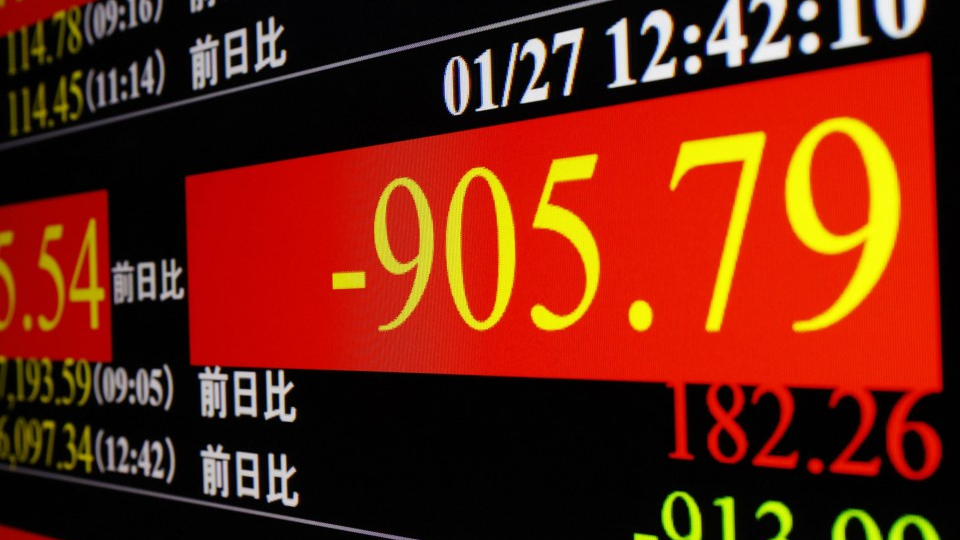 A financial board in Tokyo shows the Nikkei stock index losing more than 900 points at one point on Jan. 27, 2022. (Kyodo)

The Nikkei was in positive territory at the outset but reversed course and declined sharply throughout the day, briefly losing nearly 1,000 points. The fall came a day after the index dropped to its lowest level since late December 2020.

This year, the benchmark index has shed over 9 percent since closing at 28,791.71 at the end of 2021 amid concern over the spread of the Omicron variant of the coronavirus in Japan and fears over aggressive monetary tightening by the Fed.

In Tokyo, investor sentiment was dampened after comments by Fed Chairman Jerome Powell at a press conference on Wednesday following the central bank's policy meeting were more hawkish than anticipated, brokers said.

The market consensus had been that the Fed will conduct four rate hikes this year starting with a 25 basis points increase in March, brokers said. Rate hikes lead to higher borrowing costs for companies and households.

"While Chairman Powell signaled that the Fed would start raising interest rates in March, he did not comment on how big the hike will be or the pace of the hikes this year," said Yutaka Miura, senior technical analyst at Mizuho Securities Co.

"That sense of uncertainty led to market participants speculating about different scenarios," such as the possibility of the Fed tightening its policy more than investors had initially expected, he added.

Meanwhile, a sharp decline in U.S. stock futures and other Asian markets also weighed on the market. A rise in crude oil futures, which soared to their highest level since October 2014 in New York trading, added to the negative mood as the upward trend could pressure corporate profits, brokers said.

On the First Section, declining issues outnumbered advancers 2,067 to 87, while 30 ended unchanged.

The U.S. dollar remained firm in the upper 114 yen range after it was bought on an overnight rise in U.S. Treasury yields that fueled expectations of a widening of the interest rate gap between the United States and Japan, dealers said.

The yield on the benchmark 10-year Japanese government bond was up 0.020 percentage point from Wednesday's close at 0.155 percent, its highest level since February last year, as investors sold the safe-haven debt on a rise in U.S. Treasury yields. Bond yields move inversely to prices.