Foreign Minister Yoshimasa Hayashi pledged Monday to beef up Japan's alliance with the United States while strengthening the country's defense capabilities to ensure peace in the Indo-Pacific region, amid China's growing military clout.

"We will further boost the deterrence and response capabilities of the Japan-U.S. alliance, and for that purpose, Japan will need to strengthen its defense capabilities fundamentally," Hayashi said in a speech laying out the government's foreign policy vision and priorities at the opening of a regular Diet session. 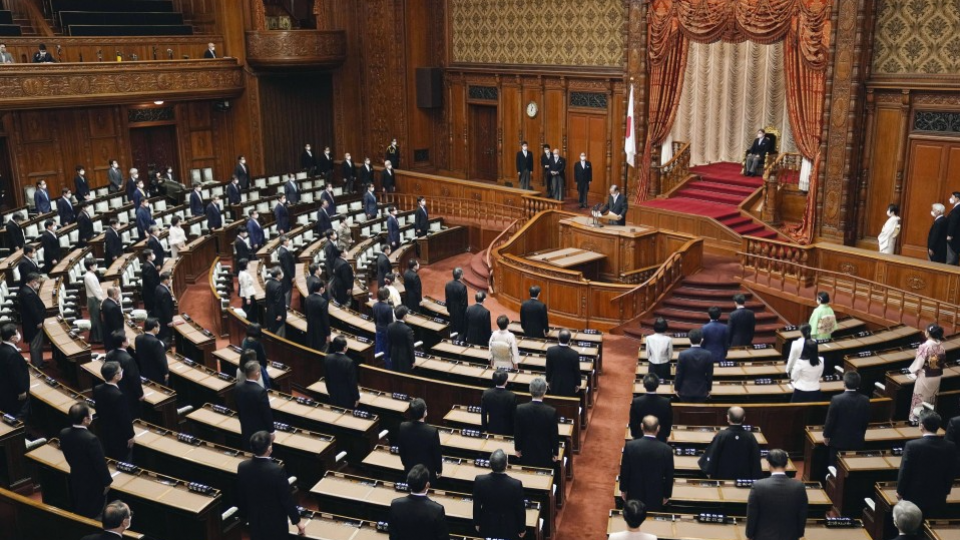 The opening ceremony of a 150-day regular parliament session is held in Tokyo on Jan. 17, 2022, with Japanese Emperor Naruhito attending. (Kyodo) ==Kyodo

"The Japan-U.S. alliance is the cornerstone of peace and prosperity in the Indo-Pacific region," Hayashi said.

He described China's attempts to "unilaterally alter" the status quo in the East China Sea, including waters around the Tokyo-controlled Senkaku Islands claimed by Beijing, as "entirely unacceptable" and said that Japan will "take a calm yet resolute approach" to deal with them.

The Senkakus, a group of uninhabited islets in the East China Sea, are called Diaoyu by Beijing, which has frequently sent official vessels near the islands, claiming that they are its "inherent territory."

Hayashi also stressed the importance of peace and stability in the Taiwan Strait while airing "serious concerns" over the human rights situation in China's far-western Xinjiang region and Hong Kong.

Concerns over what Washington says is China's "genocide" against the Muslim Uyghur minority in Xinjiang have prompted the United States and some other nations to resort to a diplomatic boycott of the Beijing Winter Olympics next month.

"Universal values such as freedom, democracy, human rights and the rule of law as well as the international order have been exposed to severe challenges," the Japanese minister said.

Vowing to realize a "free and open Indo-Pacific," Japan will step up its efforts to that end by collaborating with other allies and partners including Australia, India, members of the Association of Southeast Asian Nations and European countries, Hayashi said.

While demanding that Beijing take responsible actions, Hayashi also said Tokyo would make efforts to establish a "constructive and stable Japan-China relationship" by cooperating on common challenges as the two countries mark the 50th anniversary of the normalization of diplomatic relations this year.

To cope with the severe security environment, Hayashi mentioned the need for Japan to review the National Security Strategy, a long-term guideline that the government aims to revise by the year-end, along with two other key documents on its defense buildup -- the National Defense Program Guidelines and Medium-Term Defense Program.

Prime Minister Fumio Kishida has said the government will "examine all options necessary for national defense," including a controversial plan to acquire so-called enemy base strike capabilities despite its war-renouncing Constitution, as part of its review of the three policy papers.

As for North Korea, Hayashi said Japan will try to achieve a comprehensive resolution of issues such as the past abductions of Japanese nationals by North Korean agents, as well as Pyongyang's nuclear and missile development programs.

However, the minister did not refer specifically to Pyongyang's recent repeated launches of ballistic missiles, including the firing of a projectile Monday morning.

Through close cooperation with the United States and South Korea, Japan will aim for the complete denuclearization of the Korean Peninsula by ensuring the implementation of U.N. resolutions aimed at barring Pyongyang from developing ballistic missiles and nuclear weapons, Hayashi said.

On South Korea, Hayashi said Seoul should "fulfill its promises," apparently referring to a 1965 bilateral agreement that settled compensation issues related to Japan's 1910-1945 colonial rule of the Korean Peninsula, and a 2015 accord to "finally and irreversibly" resolve the issue of "comfort women" who worked at Japanese military brothels.

Bilateral relations have sunk to a historic low point over South Korean court rulings ordering damages to be paid to Koreans forced to work in Japanese factories and military brothels before and during World War II.

Tokyo maintains the court orders violate the past bilateral pacts and sovereign immunity under international law, a principle exempting a state from the jurisdiction of foreign national courts.