A growing number of Japanese hospitals have recently benefited from a special air mattress that helps staff more easily and safely reposition seriously ill COVID-19 patients to improve their breathing.

The nation has seen a sharp rise in hospitals introducing the mattresses, which suspend a patient on a cushion of air atop the bed, reducing by about half the six or seven people usually required to complete the task of flipping a person onto their stomach -- widely regarded as a proven method to alleviate respiratory distress. 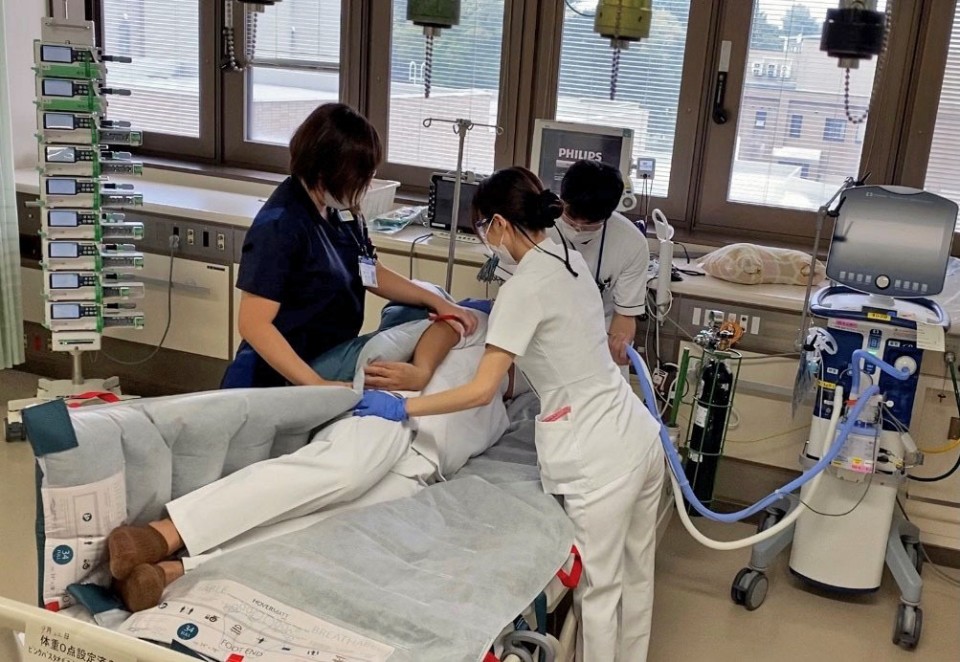 As they gain in popularity, hospitals expect the mattresses will also help resolve some issues with staffing shortages.

Handle grips, which are pulled when turning a patient, are located on the sides of the mattress, and almost no force is required for the maneuver, health workers say.

Indeed, one person could reposition a patient using the mattress, but a minimum of three are recommended to provide support and to ensure the ventilation tube, for example, does not detach during the procedure.

Named the HoverMatt, the product was developed in the United States. Meilleur, a medical equipment company, based in Yachiyo, Chiba Prefecture, near Tokyo, started importing and selling them in 2016.

The mattress conventionally aids the moving of a patient from a bed to a stretcher and is widely used in the United States for this purpose, but it had only been in use at 14 hospitals in Japan over five years until 2020.

The turning point came in December 2020, when the coronavirus pandemic was well under way. The Japanese Society of Respiratory Care Medicine unveiled the mattress at an exhibition as a device that could be used to place severely ill COVID-19 patients in the prone position that eases their discomfort.

Positioning patients face down for extended periods reduces pressure on the lungs.

In about 10 months until October 2021, 19 medical institutes, including university hospitals in 12 prefectures, introduced the mattresses -- with inquiries continuing to pour in since the start of the sixth wave of the pandemic triggered by the Omicron variant.

He said the mattresses are especially useful in reducing the risk of ventilator tubes inadvertently slipping out when turning a patient and lightening the burden for caregivers, many of whom complain of lower back pain.

Data has shown that 85 percent of caregivers have experienced lower back pain, with about 60 percent saying repositioning patients is particularly cumbersome.

Marina Kikuya, 34, a COVID-19 nurse in the ICU at Hokkaido University Hospital, says the air mattresses introduced there have made a significant difference.

"Up until recently, whenever we decided to reposition a patient, it became this huge affair involving a large number of people, and we would have to actually count aloud, 'one, two, three' and join forces for the task," Kikuya said.

"Since we've introduced the mattresses, it has really become easy, especially physically. It has also lessened the burden on the patient and improved the quality of the repositioning procedure. I hope a lot of hospitals introduce it."