An earthquake with a magnitude of 6.6 rattled southwestern and western Japan early Saturday, leaving more than 10 injured amid strong shaking but no tsunami waves were triggered, the weather agency and local authorities said.

The focus of the quake under the Pacific Ocean was within a zone off Japan's coast where it is predicted that a massive earthquake and ensuing tsunami could occur in the future. Saturday's quake had a magnitude lower than 6.8, the standard for the government to hold an extraordinary expert meeting to evaluate an earthquake.

The Japan Meteorological Agency said it will discuss whether the latest quake was connected in any way with the one predicted at a regular monthly meeting. 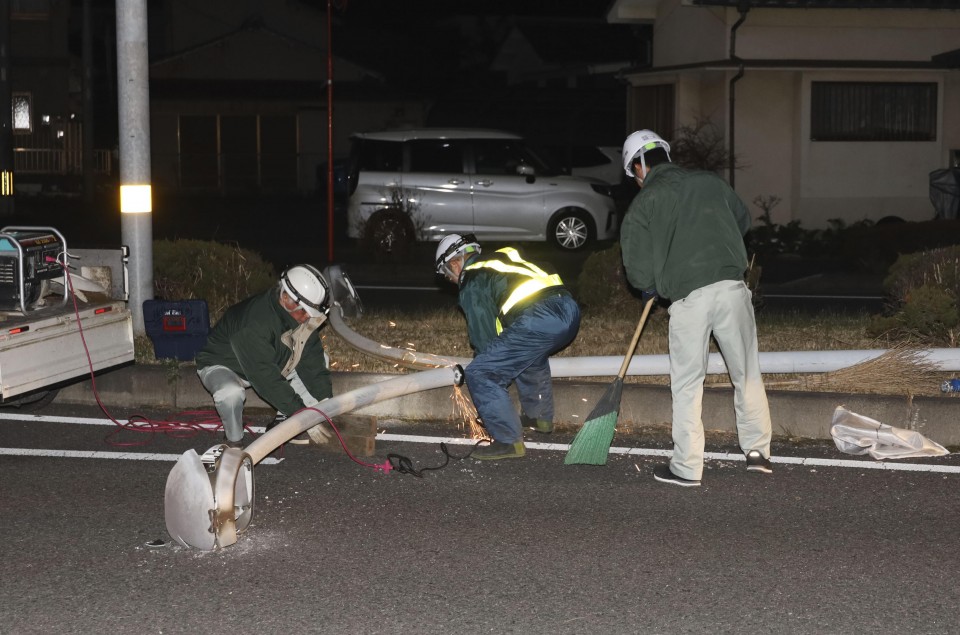 Workers clean up a fallen lamp post in a road in Oita on Jan. 22, 2022 following an earthquake with a magnitude of 6.6 that rattled southwestern and western Japan. (Kyodo)

The quake occurred at around 1:08 a.m. with the focus at a depth of 45 kilometers, logging upper 5 on the Japanese seismic intensity scale of 7 in Miyazaki and Oita prefectures on the country's southwestern main island of Kyushu, the agency said.

At an intensity of upper 5, many people find it hard to move and walking is difficult without holding on to something stable.

The agency revised the magnitude of the quake upward to 6.6 from an initial estimate of 6.4. It also warned that another quake with a similar level of shaking could occur in hard-hit areas within the next week.

After the strong quake, several smaller-scale temblors occurred sporadically in the area. 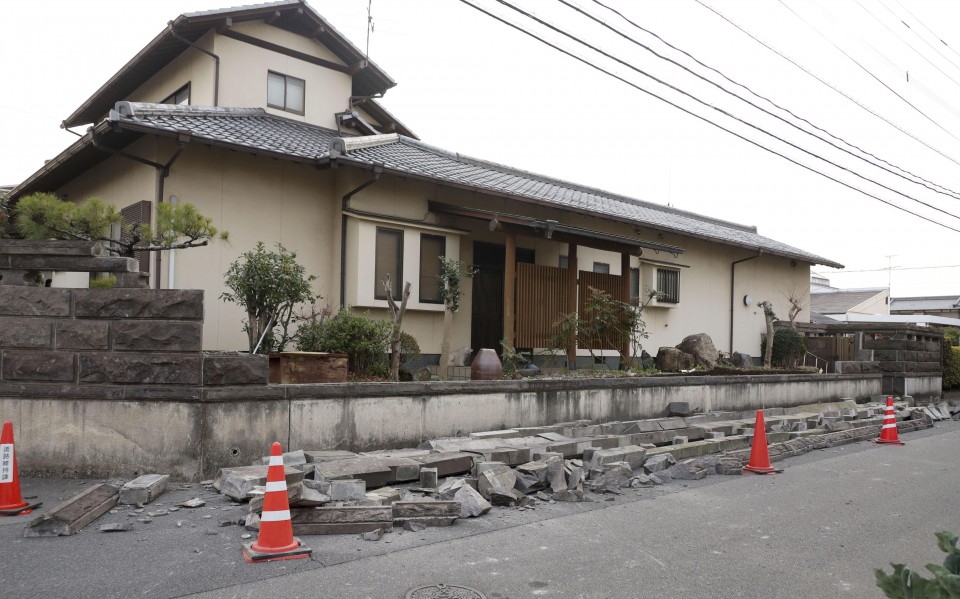 Photo shows a collapsed wall in front of a house in Oita on Jan. 22, 2022 following an earthquake with a magnitude of 6.6 that rattled southwestern and western Japan. (Kyodo)

In Oita, six people were injured, most of them slightly, according to local governments. In Miyazaki, police confirmed four injuries, including a woman in her 50s who fell out of bed.

Injuries were also reported in Saga and Kumamoto prefectures on Kyushu.

A temporary power outage occurred in Oita after the temblor. Water pipe ruptures were reported at several sites in the city of Oita.

At a house in the city, a 2-meter-tall stone wall surrounding a garden collapsed over about 20 meters, scattering debris on a road. "I was surprised when I woke up in the morning and went outdoors. I'll be in trouble if it costs a lot to repair," said a 94-year-old man who lives in the house.

In Nobeoka, Miyazaki, a convenience store clerk was busy cleaning up broken liquor bottles and products that had fallen from shelves. "The shaking of the earthquake was so scary. I'm worried that it may happen again," he said.

There were no abnormalities in the operation of nuclear power plants in the Kyushu region, Kyushu Electric Power Co. said.

Following the quake, the government set up a liaison office at the prime minister's office to gather information and assess the damage.

The quake was also felt across a wide area of western Japan as well as part of central Japan.

The Japanese government estimates that up to 320,000 people could die in the event of a tsunami triggered by a massive trench-type earthquake along the Nankai Trough stretching from off western to central Japan.

In the Nankai Trough, magnitude-8 class quakes have occurred at regular intervals over centuries, with the government's Earthquake Research Committee saying there is a 90 percent chance that a quake with a magnitude of 8.0 to 9.0 will occur there within the next 40 years.