The Association of Southeast Asian Nations may face a bigger challenge on Myanmar issues in 2022 as the group's semblance of unity may be tested under the leadership of Cambodia, the group's rotating chair for this year.

Political turmoil in Myanmar is continuing since the military seized power in a coup in February 2021, and the junta has rejected ASEAN's appeal for ending the violence and the request of the group's special envoy to meet with all stakeholders in the conflict.

Two weeks after over 30 people were killed by the military in eastern Kayah State, where its clashes with an armed ethnic minority group are ongoing, Cambodian Prime Minister Hun Sen visited Myanmar and met the junta chief despite criticisms from opponents in the country and human rights groups. 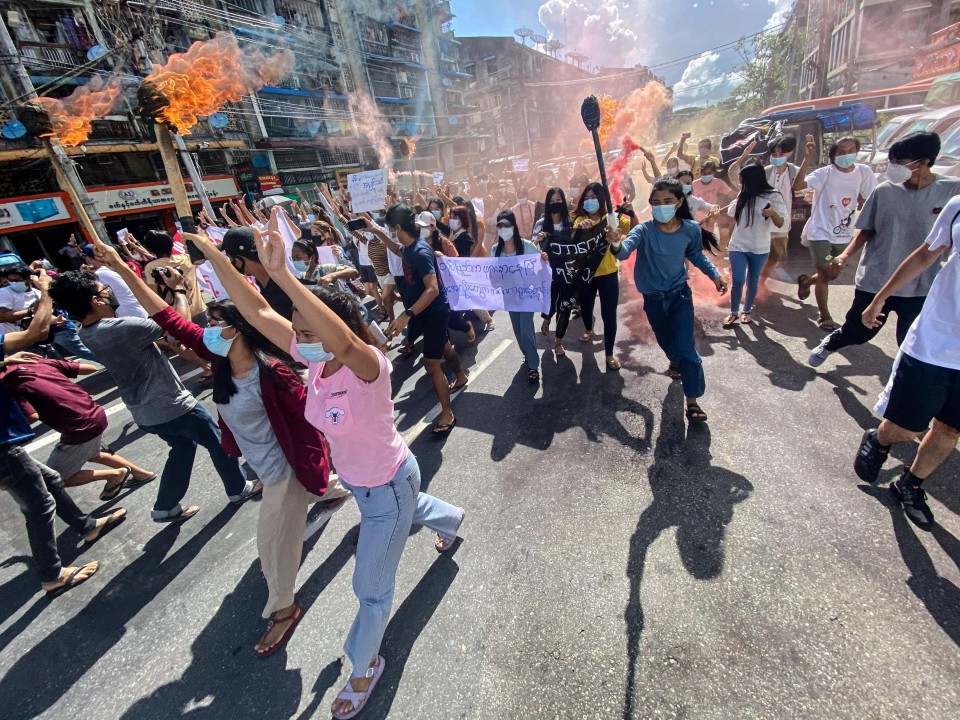 People protest against the military by holding banners and fire sticks in Yangon, Myanmar, on July 14, 2021. (Anadolu Agency/Getty/Kyodo)

In their joint statement issued on Jan. 7, the chief, Senior Gen. Min Aung Hlaing, said he had extended a "cease-fire" with all armed ethnic minority groups in Myanmar, originally set to expire at the end of February, through the end of this year.

Hun Sen's talks with Min Aung Hlaing were apparently aimed at paving the way to invite Myanmar's foreign minister to attend a Jan. 18-19 meeting of ASEAN foreign ministers in Cambodia after the group had excluded the minister and the junta chief from its meetings since October last year.

Following the talks, however, some member countries said they could not attend the meeting, causing Cambodia to postpone it indefinitely.

Although they gave different reasons for nonattendance, including the outbreak of the Omicron coronavirus variant, the cancellations seem to indicate frictions among ASEAN members over the initiative by Cambodia as an ASEAN source said it is due to disagreement over Cambodia's plan to invite Myanmar's foreign minister to the meeting.

After the announcement of the postponement, Singapore Prime Minister Lee Hsien Loong held online talks with Hun Sen on Jan. 14, stressing "the need for the ASEAN chair to engage all parties concerned, including the Tatmadaw and the National League for Democracy," referring to Myanmar military's name and the party of civilian leader Aung San Suu Kyi, which was ousted by the coup.

Lee pointed out that the military had proposed the cease-fire, but it was only with armed ethnic minority groups, stressing that the call for an end to violence adopted in a so-called five-point consensus of ASEAN referred primarily to violence against the junta's political opponents and civilian protesters.

ASEAN leaders, including the Myanmar junta chief, reached the consensus on Myanmar at a special summit in April 2021. The consensus also included the dispatch of the group's special envoy to meet with all the parties concerned in the turmoil.

Lee also noted that just days after Hun Sen's visit to Myanmar, the military attacked its political opponents in the country and imposed additional prison sentences on Suu Kyi.

The ASEAN Parliamentarians for Human Rights, a network of Southeast Asian lawmakers, criticized the Cambodian leader's meeting with the junta chief as "a brazen and dangerous attempt to seize the initiative away from ASEAN's collective approach to the crisis in Myanmar."

"Their joint press statement announces a number of apparent breakthroughs in their talks, but no one should be fooled that any actual progress has been achieved" as the military has made no concessions and no dialogue for the cease-fire, the APHR said in a statement. 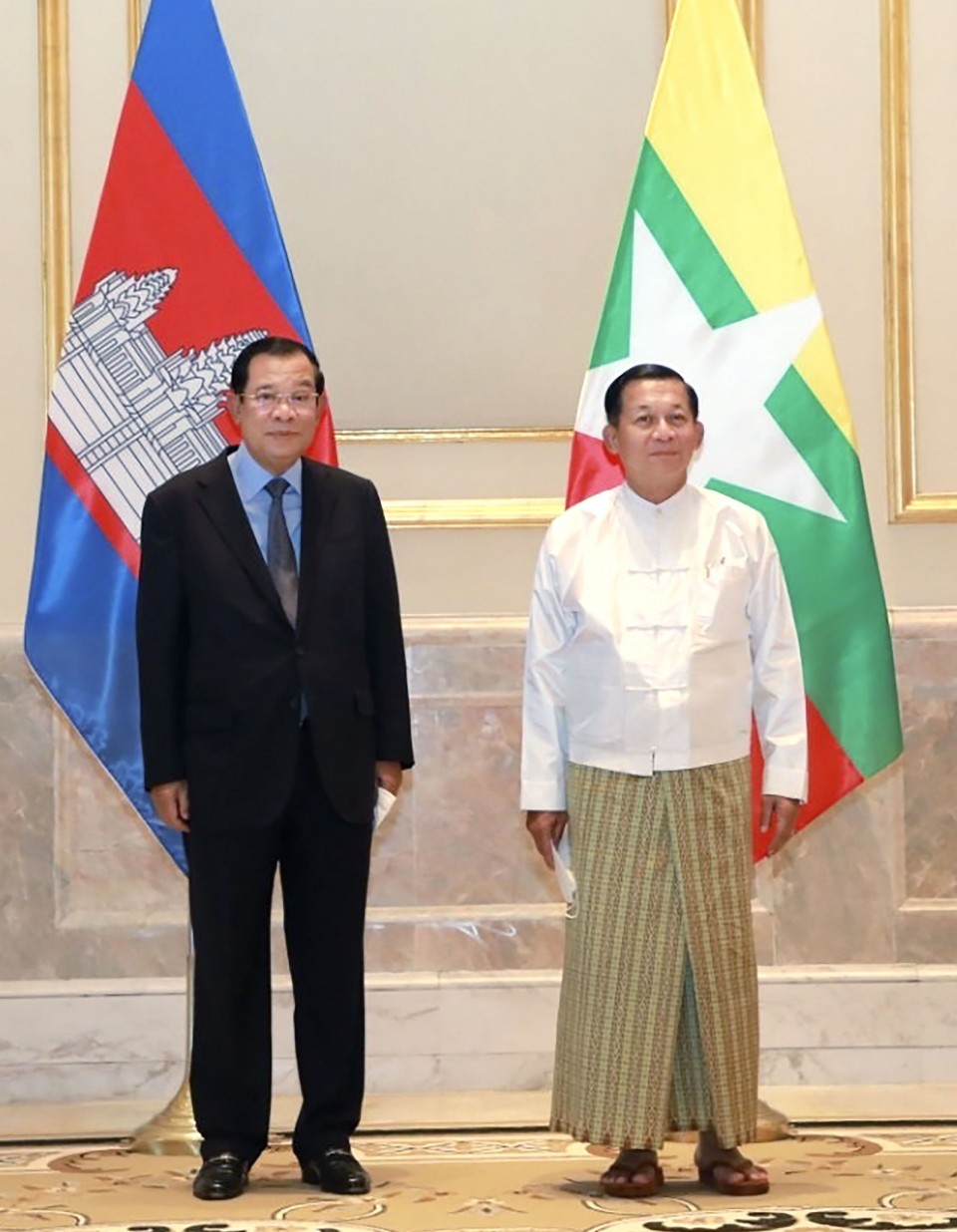 The military government had not accepted the request by ASEAN's special envoy of last year, Brunei's foreign minister, Erywan Yusof, for meeting officials of the NLD party and Suu Kyi, who have been detained since the coup.

Amid the noncooperation from the country in implementing the consensus, the 10-member grouping under Brunei's chairmanship last year has excluded the chief and ministers of the Myanmar junta from its meetings since October.

The exclusion was an unprecedented step that broke the group's tradition of noninterference in the internal affairs of other countries.

But Hun Sen in early December maintained that the leader and ministers of Myanmar should be allowed to attend ASEAN meetings, saying, "It's time to restrengthen ASEAN, from nine turning back to 10."

Opposing this, Indonesian President Joko Widodo on Jan. 5 said that unless significant progress is made on implementing the consensus, Myanmar should only be represented by nonpolitical people at ASEAN meetings.

Within ASEAN, Indonesia, Malaysia, the Philippines, and Singapore have strong views on the issue of Myanmar's representation while other member countries are relatively flexible, Chheang Vannarith, a visiting fellow at ISEAS-Yusof Ishak Institute, wrote in an online publication of the Singapore-based think tank.

Some people support Hun Sen's idea as a means to keep the communication channels open and influence the military to take steps toward democracy.

Bilahari Kausikan, a retired permanent secretary of Singapore's Foreign Ministry, said, "Those who are negative about Hun Sen's visit should ask themselves what is the alternative?"

An ASEAN source said that the question now is when the group will hold the foreign ministers' meeting and if Myanmar's minister will be there.

Many member countries are also in a dilemma in dealing with Myanmar. They would prefer to avoid friction with the junta as they have strong business ties with Myanmar and are heavily invested in the country rich in natural resources and with many lucrative development projects.

This could be one of the main reasons ASEAN has not taken strong moves, such as sanctions, on Myanmar. However, U.S. Secretary of State Antony Blinken said on a trip to Southeast Asia in December that he is looking at more potential actions against the junta to press it to return to democracy.

Yet ASEAN has also been anxious to ensure that Myanmar's crisis does not hurt the group's relationship with the United States and Europe. 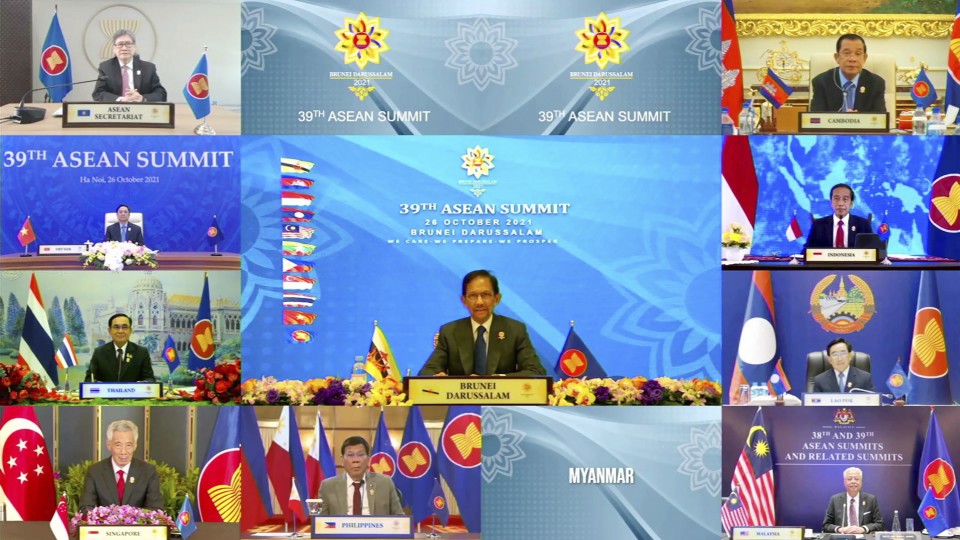 Screenshot shows leaders of the member countries of the Association of Southeast Asian Nations participating in an online summit on Oct. 26, 2021. The summit was held without a representative from Myanmar. (Photo courtesy of Brunei government)(Kyodo)

Regarding Cambodia, a diplomat of an ASEAN nation speaking on condition of anonymity said, "By himself, (we are) not sure Hun Sen can do much but if he times his moves with what China and Myanmar would do to serve Tatmadaw's interest, he would be hailed as a successful ASEAN chair," suggesting that the pro-China Cambodian leader could be a dark horse if he coordinates with China, which has close ties with Myanmar.

In the joint statement, Hun Sen said complete peace and national reconciliation cannot be achieved without agreement from all parties involved, citing Cambodia's lessons learned from the country's peace process from the late 1980s to the early 1990s.

But Hun Sen himself is an authoritarian leader who has held power for 36 years and cracked down on opposition politicians at home.

It is also noted that when Cambodia chaired a meeting of ASEAN foreign ministers in 2012, it failed to produce a joint communique for the first time in the group's history due to disagreements over China's actions in disputed waters of the South China Sea.

If Myanmar remains intransigent on the consensus, Indonesia may exert stronger pressure on the junta when Jakarta takes over ASEAN's rotating chairmanship in 2023.

But until then, it is feared that the military may kill more Myanmar civilians.

Since the Feb. 1 coup, violent crackdowns by Myanmar's security forces have killed over 1,400 people as of Friday, according to the Assistance Association for Political Prisoners, a rights group tracking killings in the country.