A Japanese company has become a world leader in a very specific area of ski manufacturing, with its triangular logo set to be seen at the Beijing Olympic Games on the skis of most of the world's best moguls racers.

The ID One brand has become known for producing the world's best-performing bumps skis, carving out a niche for those at the top of the leg-shattering discipline of moguls skiing.

Finnish skier Janne Lahtela, who wore the Japan-made skis when he won gold in men's moguls at Salt Lake City in 2002, helped establish ID One's credentials, and today consumers are bypassing the behemoth brands to become members of the ID One family. 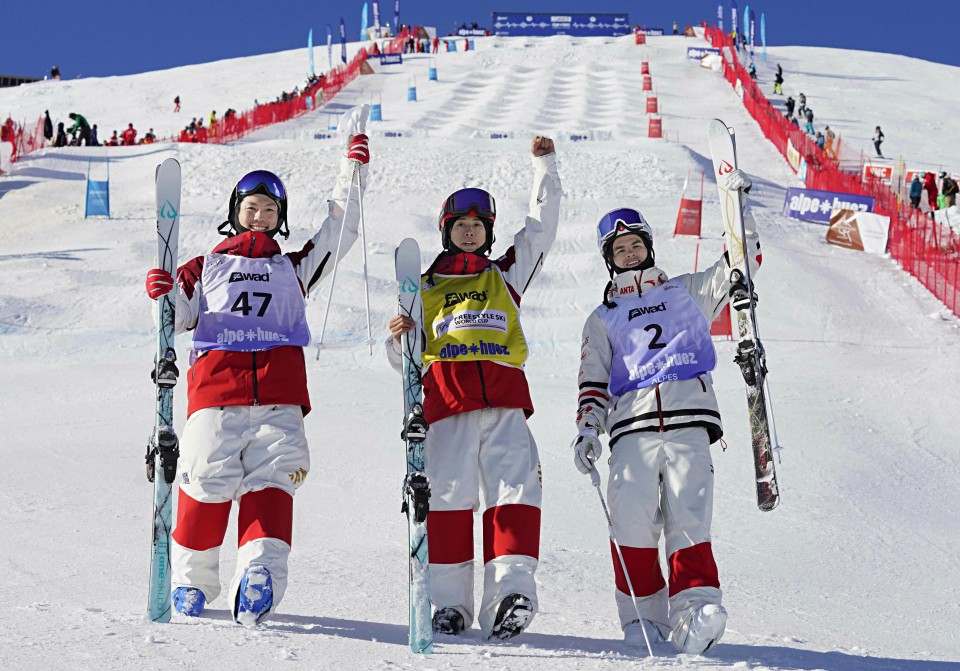 Every male and female skier who earned a podium spot in three of the first five World Cups this season did it on a set of ID Ones, manufactured and sold by tiny, four-person Osaka Prefecture-based company Material Sports.

To Material Sports president Makoto Fujimoto, one of the perks of owning a small business is being able to build lifelong relationships with loyal customers. In his particular case, many of those customers are elite athletes.

"What I enjoy most is drinking with families of winning ID One skiers," Fujimoto said in a recent interview with Kyodo News.

"With a large-scale ski manufacturer, being able to talk to a company president is rare, but I visit venues to watch competitions and dine with skiers and their families. We make them feel like they're a part of our family. They contact me directly through social media and I respond quickly. It's always been that way."

The 63-year-old was running an import business for ski goggles in the summer of 1999 when he came up with the idea of creating moguls skis in support of his friend and Olympic freestyle skier Aiko Uemura.

He used Japanese wood instead of polyurethane and had local artisans craft the core using maple for density and beech for flexibility. By 2000, he had created skis that provide the required bounce, turning ability and robustness needed to deal with the specific requirements of moguls skiing.

"We're all about quality. We never compromise on quality. If we change any material (in the ski's core) it affects the ski's behavior so we try not to change anything," Fujimoto said.

The discipline involves racers shooting directly down a steep, 250-meter course while negotiating many symmetrically laid out bumps and two jumps, off which racers do spins, twists, and front and backflips.

The score for each less than 30-second run is tabulated taking into account speed, style, form, and how difficult each trick is as well as how well it was performed.

Crashes and injuries are common, with the athletes relying heavily on their equipment to help them survive and succeed.

Unlike most modern alpine skis which have a significant "side cut," or the amount the skis thin down at their waist between the tip and tail, moguls skis are much straighter which allows for much shorter sharper turns to be made.

The skis also have a unique need to rebound strongly when bent and ID One models have edges designed to increase flexibility.

Material Sports has a cult-like following for its extensive line of moguls skis and one famous and committed advocate of the brand is Japan's men's moguls and dual moguls world champion Ikuma Horishima, who swears by his ID One skis.

"They're durable and don't fail easily. They allow me to be in control even on tighter-packed moguls fields," Horishima said.

Fujimoto has no interest in pursuing higher sales by pushing down prices and wants to make sure customers feel they get a fair shake. Pricing fairness is also a top priority for Material Sports, and Fujimoto says tuning and repairs are included in the cost.

Daichi Hara won bronze for Japan at the 2018 Pyeongchang Winter Games where the top eight finishers in the men's moguls event were all ID One skiers, but a male mogul skier has yet to win an Olympic gold medal for Japan.

The most likely to do it looks to be Horishima, currently second behind Kingsbury in the overall current season's World Cup standings.

And if Horishima manages to create history for Japan on ID One skis, Fujimoto will no doubt be the first to toast his success.