Starting the day one win back of the leaders with a 10-3 record in the 15-day tourney at Tokyo's Ryogoku Kokugikan, Abi launched a decisive opening charge en route to a huge win over the yokozuna Abi and Terunofuji are now tied at 11-3 along with No. 14 youngster Kotonowaka. 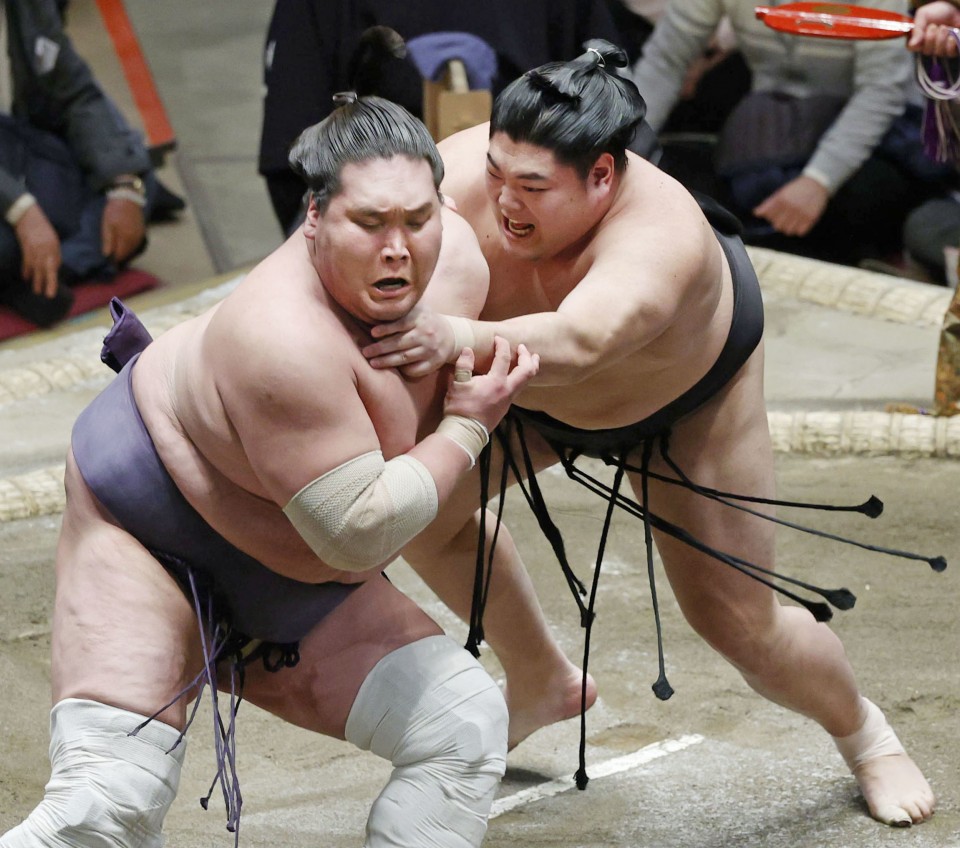 Having improved to 12-2 with an easy win, Mitakeumi will go in search of his third career championship on Sunday, when he takes on the yokozuna. Terunofuji will need a final-day victory and then a win in a championship playoff that could involve up to three wrestlers to secure his third straight grand tournament championship.

Abi only returned to the elite makuuchi division last November after his offer to resign in 2020 for breaking coronavirus safety rules was rejected by the Japan Sumo Association. He instead served a three-tournament suspension before he climbed his way up from the third-tier makushita division.

He landed a salvo of shoves to Terunofuji's throat from the jump that rocked the yokozuna backward and slightly off balance. Terunofuji lurched forward onto his right foot, his left arm extended for balance. Abi seized the arm and used it as a lever to get onto Terunofuji's flank before shoving him out from the side.

In November, Abi was in contention for the November championship until losing to Terunofuji on the penultimate day.

"I was focused on striking hard at the start," said Abi, who will fight Kotonowaka on Sunday for a chance to take part in a championship playoff. "I wanted to avenge that (November) loss by executing my kind of sumo."

Mitakeumi can wrap up the title with a win against Terunofuji in Sunday's final scheduled bout. The yokozuna has won 12 of their 16 career bouts to date.

Against No. 7 Takarafuji (9-5), Mitakeumi got the better of the initial charge and wrapped up the veteran's arms to keep him off his belt. The sekiwake, however, appeared to twist his left knee as he shoved Takarafuji out from behind.

Kotonowaka is in with a shout for what will be his maiden title as he downed sekiwake Takanosho (6-8) with an overarm throw and tagged him with a losing record.

Ozeki Shodai (5-9) and No. 6 Hoshoryu (10-4) were forced to fight twice after their first effort was ruled too close to call. Hoshoryu, the nephew of Mongolian former yokozuna Asashoryu, forced out the struggling ozeki for the final win, but looked clearly his match both times.

Komusubi Meisei assured himself of demotion back to the maegashira ranks for the next tournament after suffering his ninth defeat at hands of No. 5 Onosho, who improved to 10-4.

By posting his eighth win, over No. 13 Chiyomaru (7-7), No. 1 Wakatakakage made himself a candidate for promotion to komusubi, the lowest of the three "sanyaku" ranks below yokozuna.

No. 3 Tamawashi, who handed Terunofuji his first loss of the tournament, also improved to 8-6 after doing well to shove out crafty No. 2 Ura (7-7).

Wakamotoharu became the first makuuchi debutant to earn a winning record, the new No. 15 doing well to corral dynamic No. 8 Tobizaru (6-8) and force him out.

"He's a difficult opponent, but I was able to do what needed doing," the 28-year-old said.