Japan will head into Thursday's World Cup qualifier against China with confidence, despite the regular center-half pairing of captain Maya Yoshida and Takehiro Tomiyasu being sidelined through injury, manager Hajime Moriyasu said.

Sampdoria's Yoshida was not picked for the clash at Saitama Stadium, while Arsenal's Tomiyasu withdrew after hurting his hamstring in his club's League Cup loss to Liverpool last week, but Moriyasu said Wednesday the other center-backs in the squad were up to the task.

Nagoya Grampus' Shinnosuke Nakatani has been called up to replace Tomiyasu, while Moriyasu also has the option of starting Schalke's Ko Itakura or Naomichi Ueda of French second-division side Nimes in central defense.

"Having someone missing doesn't mean we're losing strength, as we have several good players in Japan," Moriyasu said. 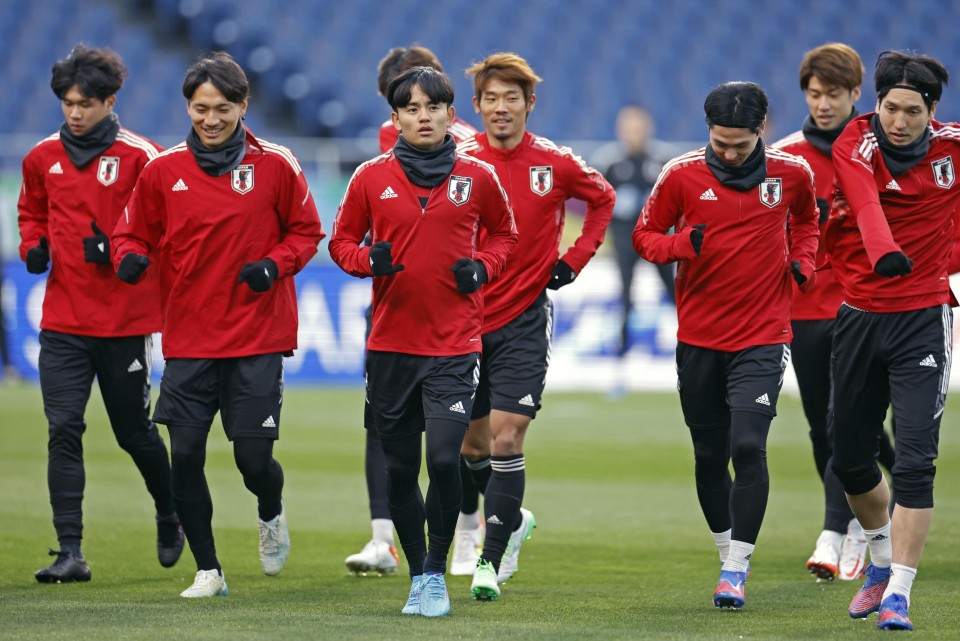 Japan's national team players train at Saitama Stadium on Jan. 26, 2022, a day before their World Cup qualifier against China. (Kyodo)

"We want to play confidently and give everything we've got."

Japan can take a big step toward automatic qualification for the 2022 World Cup in Qatar by beating a Chinese side playing their first match since Li Xiaopeng replaced Li Tie as manager.

Currently second in Asian qualifying Group B, the Samurai Blue trail leaders Saudi Arabia by four points and lead third-place Australia by a point, with only the top two sides from each Asian group guaranteed to advance to the World Cup.

Members of the Samurai Blue squad, who will be captained on Friday by Stuttgart midfielder Wataru Endo, went through a relaxed practice session at the match venue on the eve of the clash.

"The players want to work together as one to get the win," Moriyasu said.

Currently fifth in Group B with just five points from six matches, China will aim to avenge their 1-0 loss to Japan when the two teams met previously in group play on Sept. 7 in Qatar.