Former Japanese Defense Minister Taro Kono warned China on Thursday not to attempt to seize Taiwan by force, saying such an act would come at a high cost to Beijing, such as drawing economic sanctions from the international community.

"If China actually tries to use force against Taiwan, it would probably lead to a very dire situation that would probably include some kind of economic sanctions," Kono said at a news conference, remarks likely to draw a strong protest from Beijing.

Kono, a senior lawmaker of the ruling Liberal Democratic Party, added measures may "not be limited to economic sanctions only," without elaborating. 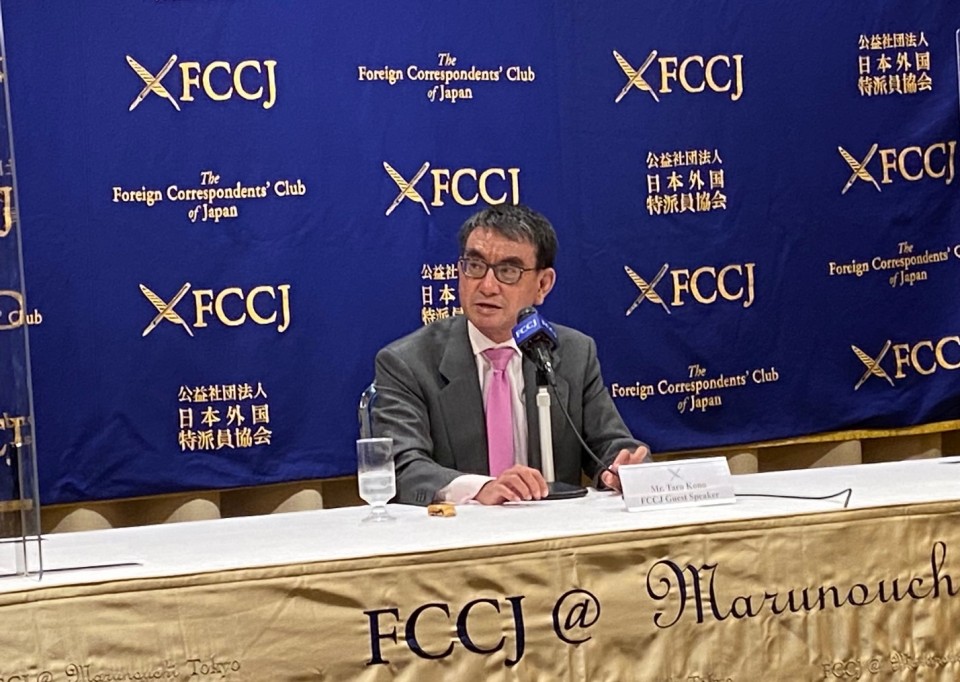 Former Japanese Defense Minister Taro Kono speaks at a press conference at the Foreign Correspondents' Club of Japan in Tokyo on Dec. 2, 2021. (Kyodo)

The comments came a day after former Prime Minister Shinzo Abe -- under whom Kono served as foreign and later defense minister -- said a Taiwan contingency would be an emergency for Japan and the Japan-U.S. alliance, and a Chinese attack on Taiwan would amount to "economic suicide."

China has demanded that Japan, the United States and other countries not interfere in issues related to Taiwan, which Beijing calls an "internal affair," claiming the self-ruled democratic island is a renegade province awaiting reunification by force if necessary.

"China has been trying to come through our territorial waters around the Senkakus continuously, and that doesn't help the bilateral relationship get better," he told the Foreign Correspondents' Club of Japan, speaking in English.

Kono, currently chairman of the LDP Public Relations Headquarters, lost to Prime Minister Fumio Kishida in a runoff in the LDP leadership election in September.

Kono urged the Kishida government to step up security cooperation with the United States and other regional powers in boosting deterrence against Beijing's attempts to alter the status quo in the East and South China seas.

"We need to work with the United States and other countries, maybe Quad or AUKUS," he said.