Business confidence among major Japanese nonmanufacturers improved to pre-pandemic levels in December, enhanced by the lifting of a COVID-19 state of emergency, but the improvement for manufacturers paused with parts shortages causing pain for automakers, the Bank of Japan said Monday.

In the quarterly "Tankan" survey, the key confidence index for nonmanufacturers, including the services sector, rose to 9 from 2 in the previous September survey, marking the sixth straight quarter of improvement and the highest reading since December 2019. 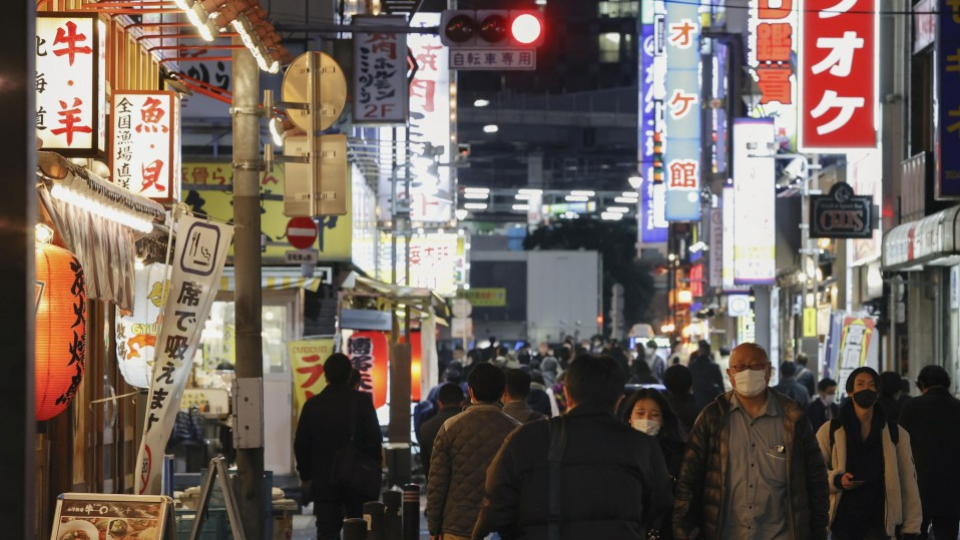 The recovery in the services sector still lags behind big manufacturers, whose confidence was flat at 18 after five quarters of gain, the survey showed.

The average market forecasts were 7 for the nonmanufacturing sector and 18 for manufacturers in a Kyodo News survey.

With the virus emergency lifted Japan-wide since Oct. 1, economic activity has been picking up, giving some relief to service providers such as dining establishments, bars and hotels which had seen a sharp drop in customers and sales.

Sentiment among hotel and restaurant operators jumped 24 points from September to minus 50 while that among providers of face-to-face services improved 36 points to minus 9.

For manufacturers, parts shortages stemming from factory shutdowns in some Southeast Asian nations with surging COVID-19 cases and soaring raw materials costs have become a drag after they recovered faster than service providers from the pandemic fallout.

Automakers were more pessimistic than three months ago as sentiment was down 1 point to minus 8.

"The improvement in the nonmanufacturing sector was larger than expected but the outlook remains weak despite the expected restart of 'Go To' campaigns" by the government to spur tourism by offering discounts, said Toru Suehiro, a senior economist at Daiwa Securities Co.

"The Tankan survey shows companies aren't optimistic about the outlook, being unsure about the impact of the Omicron variant (of the novel coronavirus)," Suehiro said, adding that Japan's economic recovery is expected to be only moderate going forward.

Prime Minister Fumio Kishida has said the government will decide on the timing for resuming the travel subsidy program after looking at the infection situation.

Japan has seen a clear downturn in newly confirmed coronavirus cases in recent weeks, though concern remains over the Omicron variant that could put a dampener on the economy. The impact of the new variant was not reflected fully in the latest data, a BOJ official said.

Sentiment among manufacturers is expected to worsen to 13 from 18, while nonmanufacturers' confidence is seen deteriorating slightly to 8 from 9

The Tankan survey is among the data used by the BOJ during its two-day policy-setting meeting from Thursday. The Policy Board is expected to check the state of the economy and discuss what to do with its funding support program introduced last year for companies reeling from the COVID-19 impact.

The BOJ is considering scaling back support for big companies as their funding conditions have been improving, sources familiar with the matter have said.

The index for corporate funding, or the percentage of companies reporting financial conditions are easy minus the percentage saying they are tight, was unchanged at 16 among big firms, while the figure for small and midsize companies was down 1 point at 8.

Large companies, defined as those with 1 billion yen ($8.8 million) or more in capital, expect a 9.3 percent increase in capital spending for the current business year through March, down 0.7 percentage point from September.

The yen's weakness is a mixed bag as it boosts exporters' overseas profits when repatriated but inflates import costs.