The two options -- having female members who marry commoners retain their imperial status, and allowing male heirs from former branches to be adopted into the imperial family by revising the 1947 Imperial House Law -- seek to address the dwindling number of eligible heirs. 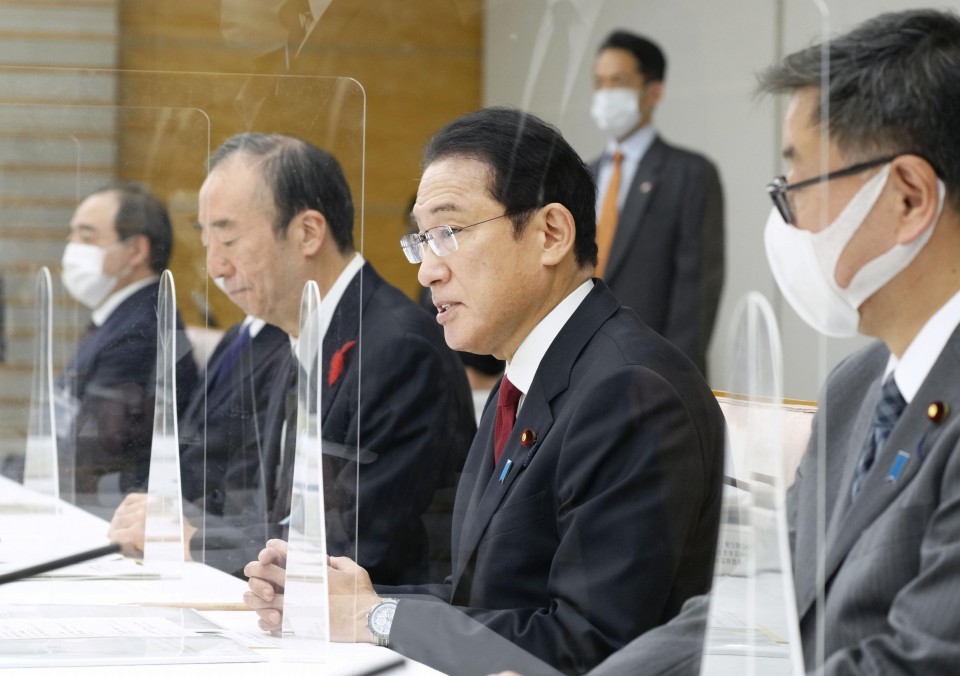 Prime Minister Fumio Kishida (2nd from R) speaks at a meeting of the government's advisory panel on securing a stable line of imperial succession in Tokyo on Dec. 22, 2021. (Kyodo)

The advisory panel did not touch on whether women or matrilineal imperial members will be eligible to ascend the throne, saying the issue "should be judged in the future," despite a call by parliament on the government to promptly hold discussions on how to achieve a stable imperial succession in a 2017 nonbinding resolution.

Under the Imperial House Law that limits heirs to a male who has an emperor on his father's side, there are only three heirs to 61-year-old Emperor Naruhito -- his younger brother Crown Prince Fumihito, 56, his nephew Prince Hisahito, 15, and his uncle Prince Hitachi, 86.

According to the report submitted Wednesday, the panel, chaired by former Keio University President Atsushi Seike, concluded that discussions on succession should be pushed back until Prince Hisahito comes of age to marry as engaging in the debate now could "destabilize the throne."

The report also said that women would not be given a choice about whether to remain in the imperial family after marriage to a commoner, and clarified that descendants of former branches adopted into the imperial family will not have the right to succeed to the throne.

The law currently stipulates that female royals leave the imperial family upon marrying a commoner, but the draft proposal had suggested that women would have the freedom to choose to retain their status.

In the event that the two options fail to secure a sufficient number of eligible heirs, the panel said that making male heirs from former branches imperial family members by law should be considered.

While Kishida has said he will respect the conclusions drawn from the discussions of the panel and submit its report to the Diet, the government still needs to consider whether the proposals may conflict with the Constitution and the will of those involved.

Women born into the imperial family have planned their lives on the basis they will have to give up their royal status should they marry a commoner. It is questionable if they can remain in the imperial family even after marriage without being forced due to a sudden change in the system.

Furthermore, even if women in the imperial family are able to retain their royal status, the government is leaning toward not granting such status to their spouses or children as doing so could pave the way for female monarchs or female-line emperors to which conservative elements have been staunchly opposed.

In such a case, some view it would be impossible to have an imperial family member and those without royal status in one household, as members of the imperial family are bound by different rules and restrictions in such areas as political activity and career choice that do not apply to commoners.

The system also highlights a double standard in which women who wed men in the imperial family will be granted royal status along with their children, but not vice versa.

With regard to allowing male heirs from former branches to be adopted into the imperial family, there are concerns it would violate the Constitution, which prohibits discrimination on the basis of family origin. The Imperial Household Law also prohibits the adoption of children.

The plan hinges on whether any of the eligible descendants actually desire to enter the imperial family, as the Constitution does not allow the government to force adoptions without the consent of involved parties.

The government has yet to confirm the intentions of any of the 11 former branches which share with the imperial family a common ancestor some 600 years ago and had to abandon their status in 1947, two years after the end of World War II.

Panel mulls imperial status for females but not commoner husbands