The earnings recovery from the COVID-19 fallout is still uneven, with a wide gap remaining between Japanese manufacturers and nonmanufacturers.

A state of emergency was fully lifted in Japan at the start of the October-December quarter and economists say this should give a much-awaited boost to the nonmanufacturing sector, especially service providers that have lagged in a recovery led largely by exporters such as Toyota Motor Corp.

Still, Japan's major airlines are expected to stay in the red for a second year in the 12-month period through March 2022. Train operators are also predicting net losses for the fiscal year and travel agency H.I.S. Co. expects a record net loss of 53 billion yen ($467 million) in the year that ended in October, highlighting the severity of the blow from the pandemic.

"What's most important for us is to become a smaller company and emerge from the coronavirus tunnel," Shinya Katanozaka, president and CEO of ANA Holdings Inc., said in late October. All Nippon Airways Co. operates as a unit of ANA Holdings. 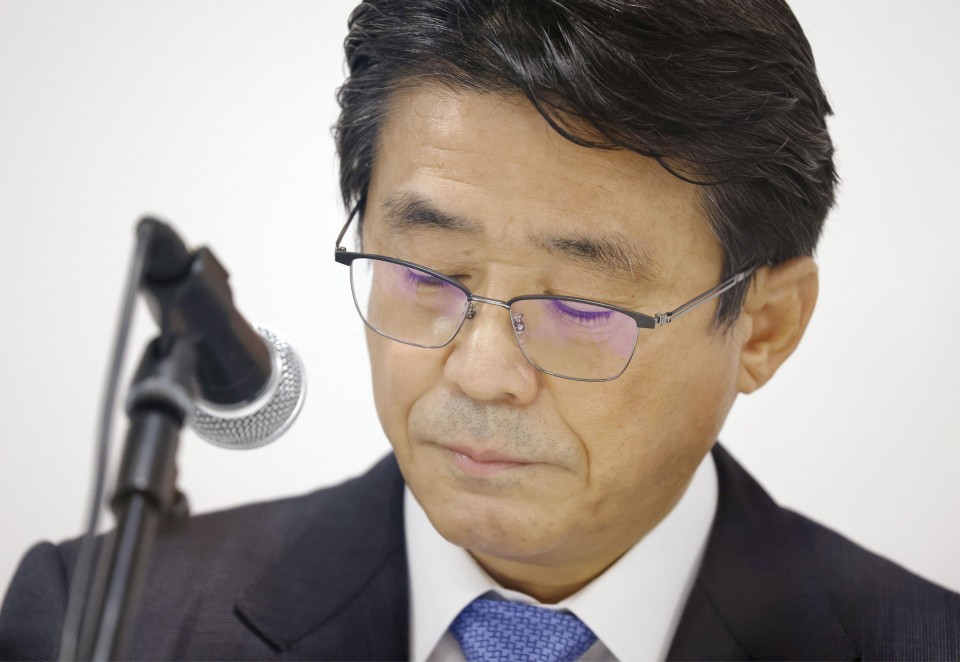 ANA Holdings Inc. President and CEO Shinya Katanozaka attends a press conference in Tokyo on Oct. 29, 2021. The parent of All Nippon Airways Co. reported the same day that it expects a net loss of 100 billion yen ($880 million) for the year through March 2022, rather than an earlier projected net profit of 3.5 billion yen, as a recovery in air travel demand hurt by the COVID-19 pandemic has been delayed. (Kyodo) ==Kyodo

While both ANA and its domestic rival Japan Airlines Co. are expected to see their earnings improve from a year earlier, when travel demand evaporated amid the pandemic, they still forecast net losses of 100 billion yen and 146 billion yen, respectively, in the business year to March.

Without running to layoffs, both will let their workforces shrink through retirement and by curbing new hiring to cut fixed costs.

"A return to profitability is a must in the next fiscal year," Katanozaka said, expressing hopes for pent-up demand as vaccinations progress.

The expected resumption of a government subsidy program to spur local tourism in Japan is set to serve as a plus for the transport and tourism sectors.

Still, it is expected to take longer for cross-border travel to return to pre-pandemic levels, aviation experts say.

Air travel demand is expected to recover to 40 percent of 2019 levels, or before the pandemic, in 2021 and to 61 percent in 2022, according to the International Air Transport Association.

The latest slew of earnings reports show the recovery has come sooner for manufacturers.

The reopening of overseas economies has benefited Japanese exporters, especially automakers. Cars and auto parts account for about 20 percent of Japan's exports in value terms.

The yen's depreciation against the U.S. dollar and other currencies also provides a tailwind, as a weaker yen boosts profits earned overseas when repatriated and the price competitiveness of Japan-made products abroad.

A weaker yen has a negative side, too, raising prices of imported products. But shrugging off concerns about the negative impact, Bank of Japan Governor Haruhiko Kuroda said recently that the currency's recent slide against the dollar should serve as a "positive" factor for the Japanese economy.

Toyota on Thursday upgraded its net profit outlook to 2.49 trillion yen for the current business year, matching a record high seen in fiscal 2017.

But Toyota Chief Financial Officer Kenta Kon said at a press conference that it would have been a downward revision without the positive impact of the weaker yen and that the world's No. 1 automaker by volume still needs to improve its profit structure.

Parts shortages and surging raw material costs are increasingly clouding the outlook for the auto sector, the backbone of the Japanese economy. Senior officials at Japanese automakers say it is still unpredictable exactly when the chip crunch will end. 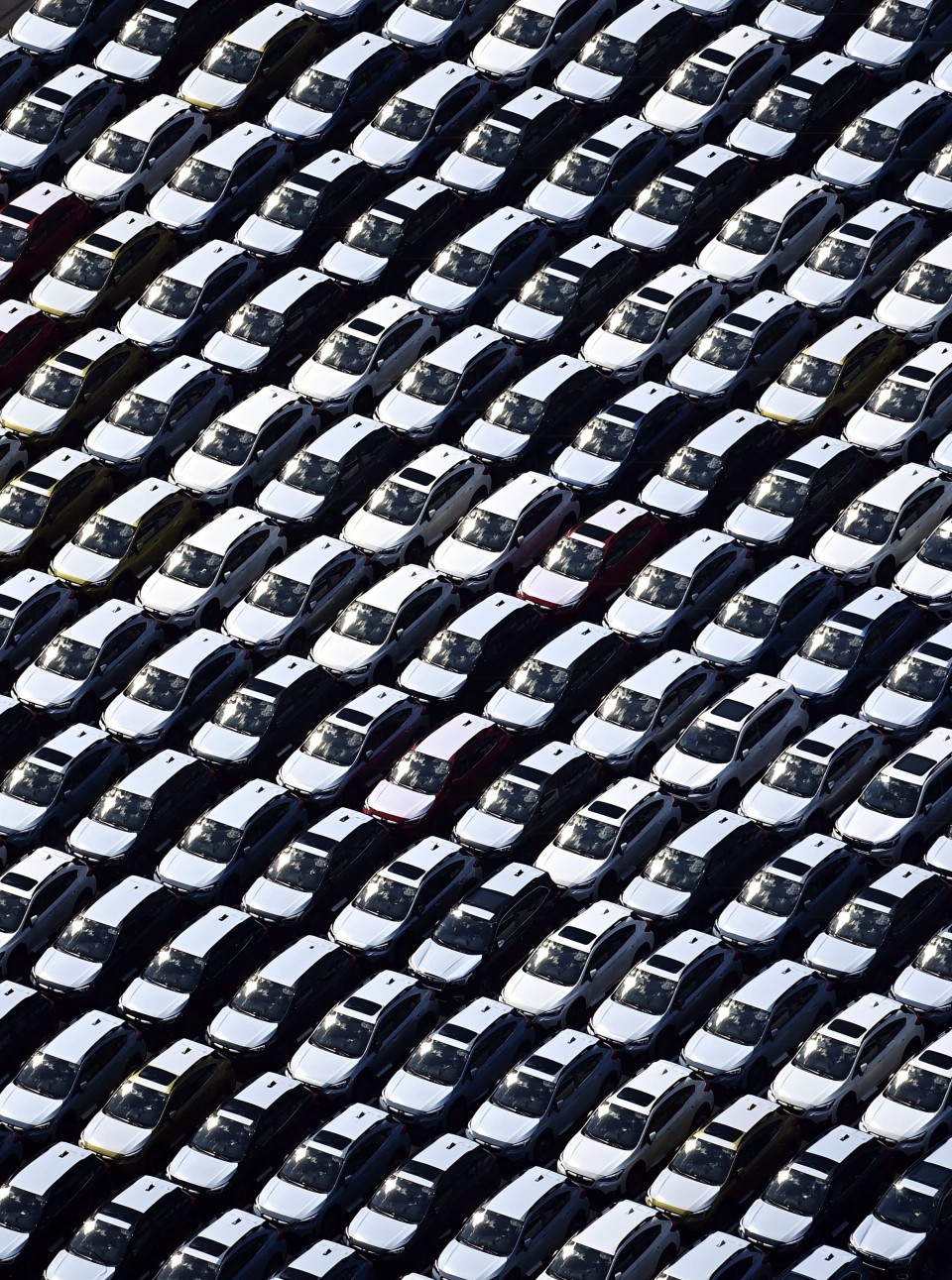 Photo taken from a Kyodo News helicopter on Aug. 17, 2020, shows foreign-bound passenger cars at a distribution center in Kawasaki near Tokyo. (Kyodo)

Honda Motor Co. on Friday slashed its global sales target for a second time in fiscal 2021 to 4.2 million vehicles from 4.85 million, leading to a 17.2 percent cut in the net profit outlook to 555 billion yen.

"We made up for lost opportunities to sell our cars due to the semiconductor impact thanks to (favorable) foreign exchange rates" in the first half, Mitsubishi Motors President and CEO Takao Kato told a briefing on its second quarter earnings results Thursday.

"The situation is expected to remain severe until the year-end and it is unlikely that it will turn around suddenly and semiconductors will start coming in at the start of next year," Kato said.

A strong earnings recovery is a requisite for companies to raise wages for employees. Prime Minister Fumio Kishida, under his slogan of distributing wealth, has said he will call for wage hikes.

Still, Toru Suehiro, a senior economist at Daiwa Securities Co., said only companies that see robust earnings will be able to reward employees with higher wages.

"The gap in recovery between manufacturers and nonmanufacturers is expected to become narrower as the state of emergency was removed," Suehiro said. "After large production cuts by automakers, however, exports will likely fall in the October-December quarter and on balance the economy will likely grow but at a moderate pace."